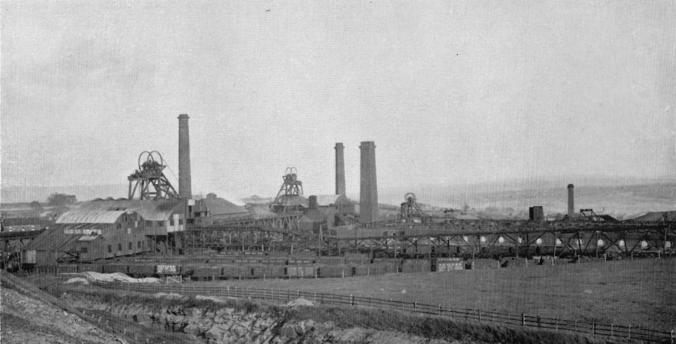 The Hoyland Silkstone Colliery was situated at Platts Common in Hoyland, close to the Manchester, Sheffield and Lincolnshire Railway line near Birdwell. It was named after the Silkstone coal seam it was sunk to exploit, being built on the site of the former Hoyland and Elsecar Colliery. Coal was mined from land leased from the Vizard family, the Earls Fitzwilliam at Wentworth Woodhouse and the Vernon-Wentworths of Wentworth Castle, as well as several minor landowners.

A colliery had been established at Platts Common by William Vizard in late 1840. He named the concern the Hoyland and Elsecar Coal Company, and it consisted of a partnership carried on between him, the Earl of Lauderdale, and the Honourable Sir Anthony Maitland. The partnership ended at the end of 1842.

Old Series Ordnance Survey 1inch to 1 mile map showing the Dearne and Dove Canal with an incline plane to a wharf at the canal used by Earl Fitzwilliam’s Jump pit late 1836. A separate railway was extended down to join it from Hoyland & Elsecar Colliery (later Hoyland Silkstone)

The Hoyland and Elsecar Colliery had two shafts working the thick Barnsley seam. It was initially managed by Timothy Smith (1799-1874) who came from a family of Leeds coal masters and resided in Hoyland Hall until around 1851, being superseded by Robert Charles Webster (1822-1883) who remained at Hoyland through to 1860, assisting at a number of accidents at local collieries, notably Lundhill Colliery in 1857.

The cashier and agent of the pit during much of this period, 1845-1858, was John Harrison whose grave lies in Tankersley churchyard:

A contemporary description of the pit says:

“The present pits are respectively 130 and 132 yards in depth. The seam has a dip of 1 in 14 N.E. and varies from 7 feet 6 inches to 8 feet in thickness. It is overlain by thick strata of “Strong blue band”, with fire-clay underneath.
This coal is described as being “very hard, durable, and excellent for steam purposes.” The mine is worked in banks or stalls to the rise of the seam, 30 yards wide, with 30 yards of pillars left for the purpose of working back to the level. The principal market is Hull, from whence the coal is exported to the various ports on the eastern coast of England. The present current price at the shipping staith at Elsecar, on the Dearne and Dove canal, is 5s 9d. per ton.”

Description of the Hoyland and Elsecar Coal Co. from De La Beche, Henry and Playfair, Lyon, Third Report on the Coals suited to the Steam Navy, Museum of Practical Geology, London: William Clowes and Sons, 1851, p.25

Ownership of the colliery had been taken on by John Woodhouse Day (d.1874), of Pelaw House, Durham until he went bankrupt in 1864. At that point the mines were sub-let to Charles Wells senior, a shipowner from Hull. Wells was joined by new partners, Messrs William Singleton Birch and John Ryde, mineral merchants from Manchester, with interests in coal and lime. Birch & Ryde convinced him to to sink deeper pits at Hoyland to prove the Silkstone Seam, largely untouched by mining in the area up to that time.

Negotiations had commenced in 1871, and new leases from the Vizards were agreed in 1873. In May 1874 the partnership was expanded to include Jacob Peter Higson and John Higson, mining engineers from Manchester, and also Charles Wells the younger, son of the original partner. Charles Wells the younger was elected Mayor of Hull at this time, and his portrait in oils and a bust can be seen in Hull Museums Collections. In July 1874 a new limited liability company was incorporated as Wells, Birch, Ryde & Company Limited, having a substantial capital of £100,000. The new mines were managed by William Harrison Peacock, Jnr (d.1906)

John Higson and William Harrison Peacock Jnr led efforts to prove the viability of the Silkstone seam, some distance below the reliable, but then largely exhausted Barnsley seam. The first sod of a new deep shaft was cut in August 1873 by the Reverend John Cordeaux, Vicar of Hoyland. The new downcast shaft was 20 feet in diameter, being sunk by contractor Valentine Joyner at an astonishing rate down to 510 yards. It hit the Silkstone seam which proved to be of very good quality and up to 5 feet 8 inches in thickness. A second shaft, 14 feet in diameter was sunk, first to the Parkgate seam at 400 yards depth, and then to the Silkstone seam. Finally, an old Barnsley seam shaft, 8ft 6in in diameter, was sunk further to the Flockton seam.

Ordnane Survey 1911 of Hoyland and Elsecar, showing mineral line connections (to former M.S.L.R, now Great Central) and passenger services (Midland) as well as inclined plane from Hoyland Silkstone at Platts Common down to Elsecar branch of Dearne and Dove

In November 1877 a vital new railway branch connecting the colliery with the Manchester, Sheffield and Lincolnshire Railway Company was completed, prior to this the only connection was the steep incline railway down to the Dearne and Dove Canal coal tips, and connecting to the M.S.L.R Co.’s older Elsecar Branch. Great expectations were held out for the company, though it had committed itself to expensive coal leases and even the short railway branch had been an expensive endeavour at some £20,000 as it required cuttings 40 feet deep and embankments of equal height.

Wells, Birch and Ryde Company Limited changed its name to the Hoyland Silkstone Colliery Company Limited, after 1880 when the secretary Mr T.G. Newman was replaced by Christopher William Fincken, originally from Mostyn Colliery. The colliery, though employing around 1,000 men and boys, went through some difficulties in the 1880s, and went into voluntary liquidation in December 1883, shortly after one of the partners, John Ryde was declared bankrupt. The Colliery was actively working 4 seams at this time, the Silkstone, the Thorncliffe, the Lidgett and the Parkgate.

Fincken was appointed Liquidator of the old company, and continued the business. Various attempts were made to agree new terms for leasing the Rev. Henry Brougham Vizard’s land to a new company, but with no immediate outcome.

In 1886 there were fears the colliery would have to close. Following the recent closure of local ironworks, the Sheffield papers of the day sounded an ominous note:

“[…] trade in the district will be paralysed, and Hoyland in all probability become a second Dronfield.”
‘Hoyland Silkstone Collieries’, The Shefield Daily Telegraph, No.9630, 12th May 1886, p.2

It was not until November 1888 that a new company, the Hoyland Silkstone Coal and Coke Co., Ltd was established. The authorised capital of the new firm was £70,000 in 7,000 shares of £10 each. The new firm, headed by capitalists from Lancashire, established a healthy business, with Fincken becoming the Agent and Commercial Manager of the pit.

Fincken features prominently in the following years, in wage disputes with the miners, and even being physically assaulted in the notorious colliery riots of September 1893.

Nevertheless he was active in local government, being on the Hoyland School Board, a Guardian for Hoyland Nether and a County Councillor for the Tankersley and Hoyland Division of the West Riding before his death in 1895. Fincken was replaced by William John Lazenby, himself a noted figure in local affairs. 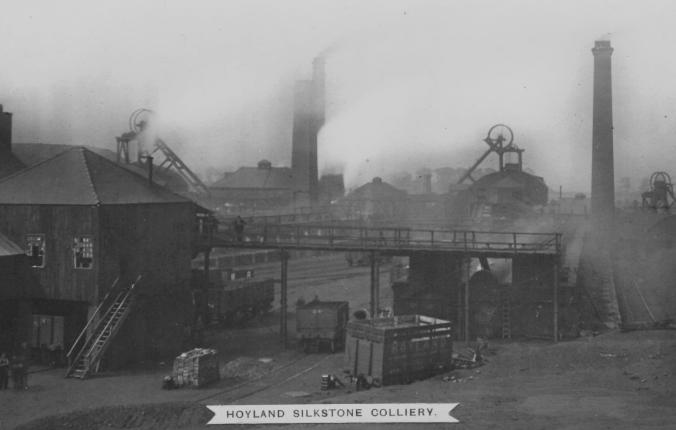 By 1912 the directors included Jacob Higson and F.A. Scott, under the Chairmanship of Thomas Henry Birch, son of William Singleton Birch. The Birch name continues to be associated with mineral distributions to this day though the Singleton Birch Company. 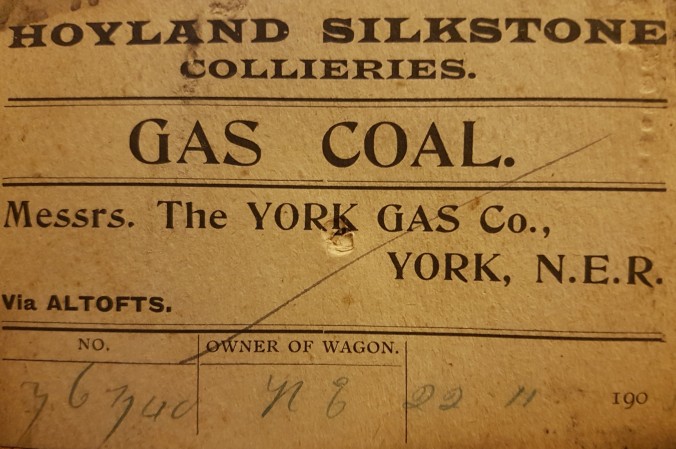 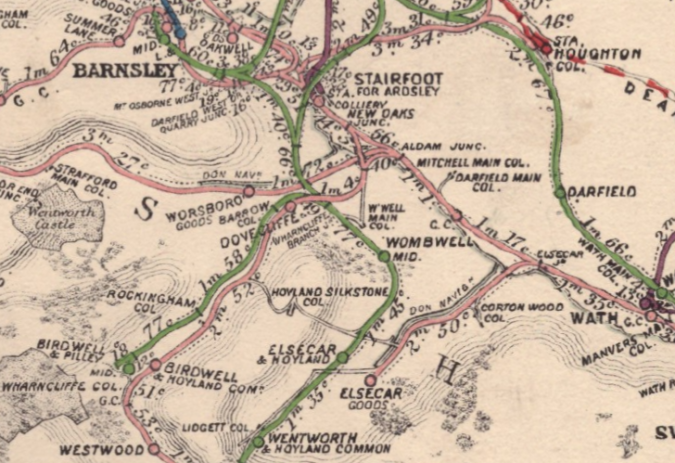