Lidgett Colliery was a small colliery, located between Hoyland and Tankersley which was active from 1879-1911. It is unusual in being a private pit which disappeared long before nationalisation in 1947, and yet still having tangible remains – the twin roofline of its engine house can still be seen by the railway bridge, where Sheffield Road crosses Broadcarr Lane, between Hoyland Common and Harley. The site is now known as the Lidgett Garage.

The history of the Lidgett Colliery, and particularly the railway connection, has been well covered by the late Trevor Lodge (1944-2014) in an excellent article originally published in the Industrial Railway Record, No. 54 1974 (pp.237-252) and now available online from the Industrial Railway Society. It is recommended reading. Nevertheless the story of this pit has many unexplored aspects which this short article will touch upon. 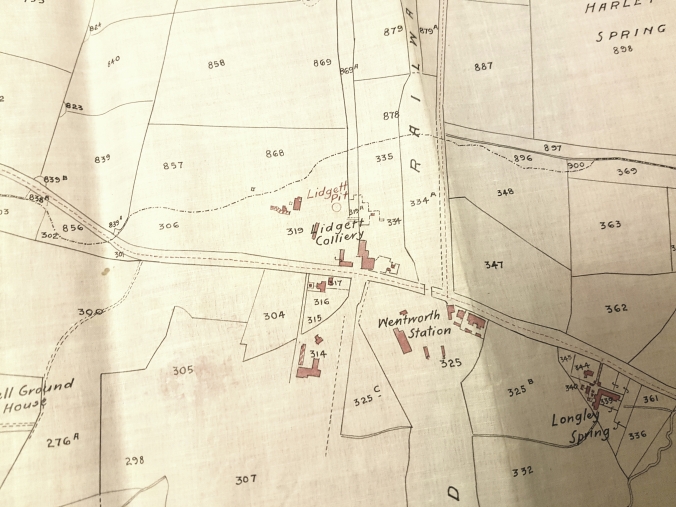 The origins of the pit date back to the 1830s from the time deep shafts were being sunk by Henry Hartop and his son John at Skiers Spring to mine the Tankersley ironstone on Earl Fitzwilliam’s land. The work proceeded over many years into the 1850s, by which time 6 shafts had been sunk to access, pump the water, wind the men and minerals and to ventilate the workings. The shafts included:

The Skiers Spring ironstone pits were a major concern in their own right, employing hundreds of men. Ironstone was needed to supply the Elsecar and Milton Ironworks. Successive tenants of the ironworks contracted to take Earl Fitzwilliam’s coal and ironstone from the nearby collieries and ironstone pit.

In the 1860s George and W.H. Dawes who leased both ironworks were being supplied with 800 tons per week, though their requirements were declining. By the 1870s the best of the Tankersley ironstone had been worked out and supply was replaced by ironstone from Frodingham, Lincolnshire. The closure of the extensive ironstone mining operation was therefore a major cause of concern – though it also provided new opportunities for enterprising businessmen: for James Smith starting out at the Skiers Spring Brickworks, and for the enterprising ex-manager of Skiers Spring ironstone pits, John Fisher.

Fisher went into partnership with Dr William Clarke, of Wentworth, doctor to the Fitzwilliam family at Wentworth Woodhouse. Fisher, who lived at Bellground House, in amongst the ironstone workings, decided to part-fill some of the old shafts and open out the previously unworked Lidgett coal seam – a thin seam around 2 feet thick which produced a excellent house coal. The early coal working proved very challenging, however, as the seam was underlaid by a very hard bind which was hard to work by pick, and consequently the costs of getting the coal became a serious drain on the early progress of the concern.

Notice is hereby given, that the Partnership heretofore subsisting between us the undersigned, John Fisher and William Clarke, carrying on business as Colliery Proprietors and Coal Merchants, at the Lidgett Colliery, Tankersley, in the county of York, under the style or firm of Fisher and Clarke, has been dissolved, by mutual consent, as and from the 31st May, 1883. All debts due to and owing by the said late firm will be received and paid by the said William Clarke. – Dated this 15th day of June, 1883.

In order to bring fresh capital Dr Clarke took over the concern and called on support from family and business connections. In July 1883, he entered into an agreement with Horace Walker – the successful coal owner and manager of Wharncliffe Silkstone Colliery – to create a new limited liability company with £15,000 capital divided into 300 shares of £50 each. The agreement, which agreed a payment of £6,500 for the old business, laid out that the new company:

…be called “The Lidgett Colliery Company Limited,” and having for its objects, or some of its objects, the purchasing from the Vendor of all his estate and interest in the Colliery commonly called or known as The Lidgett Colliery, situate, lying and being in the Parish of Tankersley. in the county of York, and all buildings, erections, works, engines, machinery, tools, implements, corves, wagons, carts, horses, plant, stock-in-trade, stores, chattels, and effects belonging or appertaining thereto or used therewith, and the goodwill of the business of a coal master carried on by the Vendor, and the carrying on of the said business, and the taking from the Earl Fitzwilliam, a lease of the said colliery.

Extract from Memorandum and Articles of Association of the Lidgett Colliery Company, p.6 (National Archives, BT31/3209/18702)

The first shareholders were :

Under the advice of his son-in-law, George Blake Walker, Dr Clarke’s new company invested heavily in mechanisation to relieve the heavy manual work of hewing in the hardest material beneath the good coal in the low lidgett coal seam.

The introduction of coal cutting machinery and the re-arrangement of the working coal faces to allow for long runs of the machines led to a dramatic change in fortune for the pit – raising the tonnage from 700 to over 2000 tons a week, whilst reducing the working costs considerably. Working faces advanced much more rapidly and the amount of small coal was reduced markedly, maintaining a better selling price for the minerals worked. 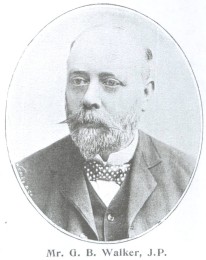 The earliest coal-cutting machines, rail-mounted disc cutters, were built to the Gillott and Copley patent of 1868, and powered by compressed air.

However, as mining continued and the working face advanced further away from the main winding shaft, the pressure of compressed air piped to the face began to drop-off, diminishing the effectiveness of the system. This caused the Lidgett colliery management to look to a new means of powering their machines: electricity.

Lidgett Colliery was one of the earliest pits to machine-mine coal with electrical coal cutters – the earliest attempt in the UK was in 1887 in a collaboration with Bowers collieries and Walter Goolden & Co. Electricity had only begun to be seriously discussed as a potential power for underground work from 1885 onwards. Dr Clarke was not slow to seize the possibilities of the new technology – his son Thomas Bishop Andrews Clarke (1868-1909) had trained as an electrical engineer with the General Electric Power and Traction Co. Limited, and as early as 1892 had been engaged in ultimately unsuccessful experimental work at Glasshoughton Colliery under Albion T. Snell (1858-1936) and the pit manager Major William Waterhouse (1866-1940).

In April 1893, building on the extensive experience with disc machines at Lidgett, T. B. A. Clarke commissioned the Yorkshire Engine Company to modify the frame of a compressed air cutter to his design, installing a 14 HP DC electric motor and triple reduction gearing. Experimentation continued for some time, but in April 1894, Clarke gave a public demonstration of the cutter and shortly afterwards he and his brother Robert William Clarke, secured a patent which led to the development of a truly commercial machine.

Working with fellow Yorkshire electrical engineers and manufacturer, Percy Rosling, Clarke developed his business., extending electrical installations to Nostell, Astley and Tyldesley, Stanton, Sutton, Aber, Cannock and Rugeley, Blackwell and other collieries by 1897. Many collieries were simply trialing single machines at this time, several to cut costs during periods of labour dispute, so the systemic adoption of cutters remained limited in scope, though interest was certainly growing.

Forming a partnership with Godfrey Francis Steavenson, initially based at Western St, Barnsley, the business then took up workshops opposite Lidgett Colliery, building electrical and compressed air coal cutting machines which were much in demand from 1898 onwards.

In 1898 the pair formed a limited company: Clarke, Steavenson & Company Ltd. Growth was rapid, by 1901, 70 machines were at work in coalfields in England, Scotland and Wales.

Schematic design, Proceedings of the Institution of Mechanical Engineers, 1902

Improvements continued to be made in the design and build, with compressed air and electrical models, including alternating current motors, worm gear and skid mounted models emerging. By 1905, more than 130 machines had been supplied. By 1907 there were 150 installations at work, in England, Scotland, Wales and a small number internationally, including in France and Russia.

In some respects Clarke and Steavenson were ahead of their time – mechanisation in mining remained a niche activity outside pits working particularly thin seams – Yorkshire was exceptional – Wharncliffe Silkstone, Pope and Pearson’s Silkstone pit (which saw the birth of the Diamond machine) and Lidgett were the main examples. It would not be until the shock and demands of the First World War that machine mining took root more widely. 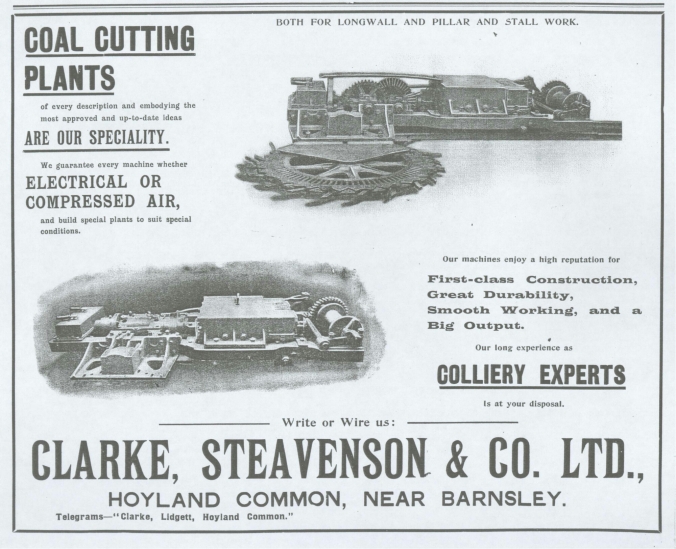 T.B.A. Clarke died in 1909, a year before his father, and the company he founded was wound up in 1914, not long after the final closure of Lidgett Colliery itself in 1912. In 1916 Steavenson registered a company to continue the electrical and mechanical engineering business: Lidgett Engineering Company Ltd. It lasted until 1961, long after Steavenson’s death in 1928. Clarke and Steavenson were united in death – their graves lie side by side in Tankersley churchyard.

Many Hoyland locals remember the workshops opposite the Lidgett garage site as the ‘nut n bolt factory’, as indeed it was, Arthur Hague Ltd being the proprietors, until the site was demolished for redevelopment as Lidgett Grange. Still, the remains of Lidgett Colliery remain to remind us of an innovative little pit which thrived with coal, after beginning with ironstone.

Clarke, Robert William, Notes on coal-getting by machinery at Lidgett Colliery, Journal of the British Society of Mining Students, Vol.X. No.5, 1889, pp.124-130