This page provides an overview of the process of the restoration of the winding engine house roof, from before the work began, through to completion.

The Friends of Hemingfield Colliery and volunteers would like to acknowledge the support of the following in achieving this work:

Before work began in October 2016, the roof of the winding engine house was in a poor state of repair, with numerous holes in the slates, significant decay and the beginnings of collapse in the timberwork, an much of the guttering and pipework broken or robbed away.

The damage was especially bad where the 1846 sandstone building joined the later brickwork extension, where the rafters were exposed and silt and weeds blocked the drainage. Trees had even begun to take root in some parts of the roof and walls.

Work began with the arrival of scaffolders, on the 18th October 2016. The initial preparation of the site included laying down plywood boarding to enable the movement of scaffold poles and boards. 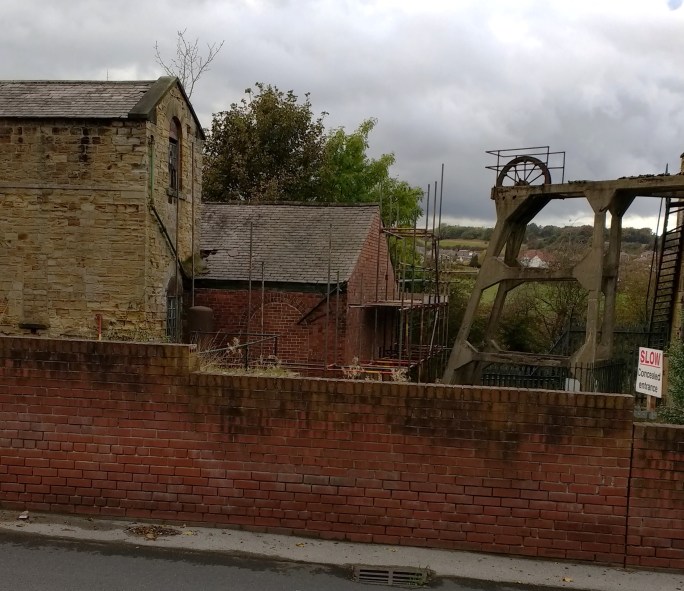 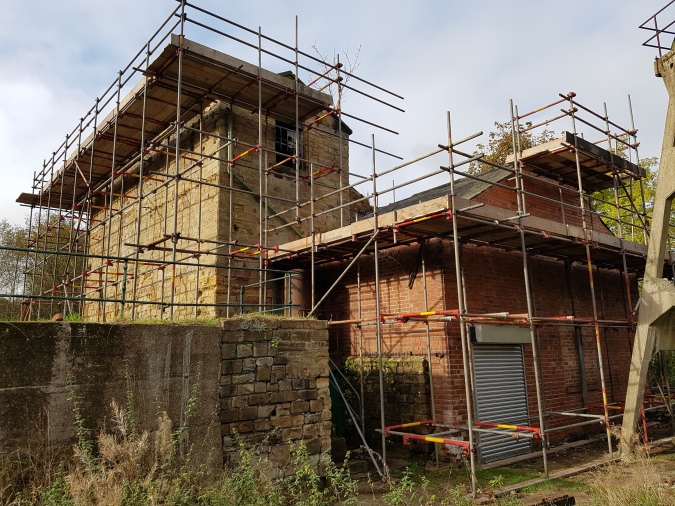 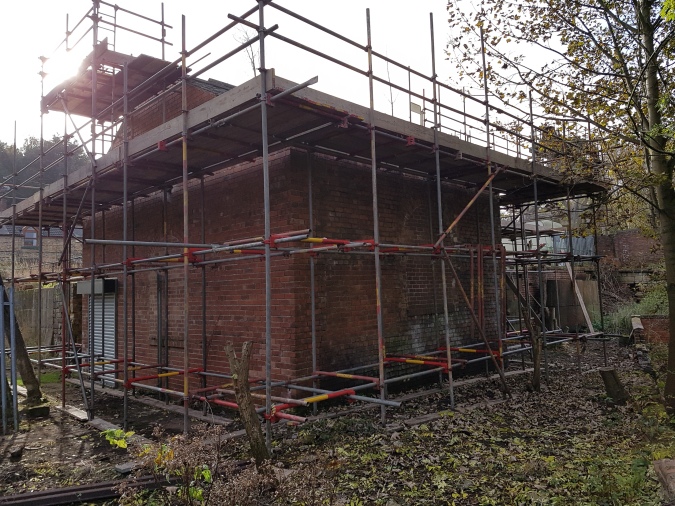 The scaffolding presented a unique opportunity to see details of the building visitors never normally get to see. 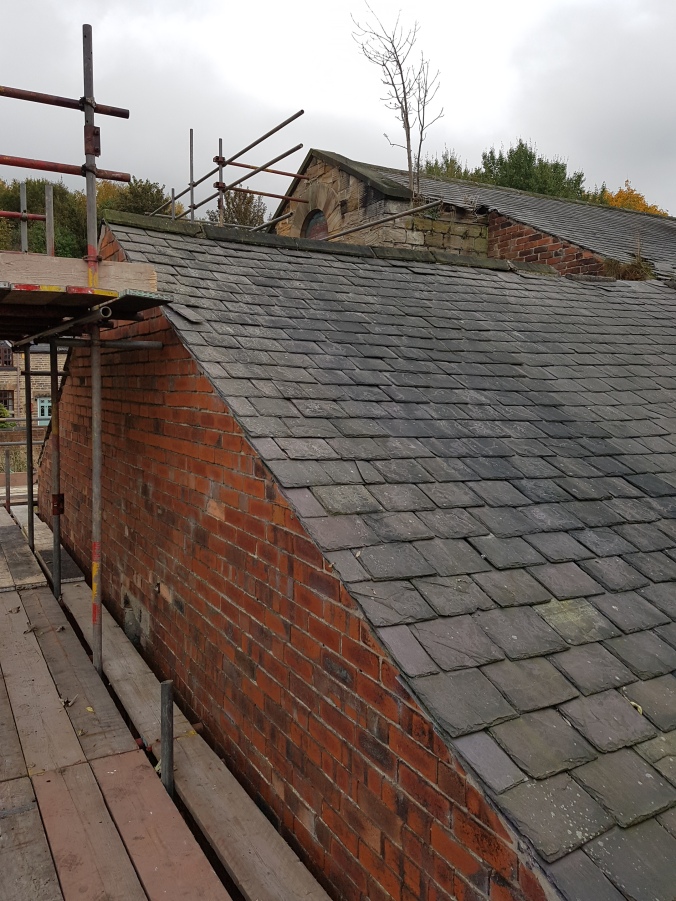 The challenge was to get up close and personal with the existing rooves; rooves plural because the building now standing is the result of a mixture of phases of activity in the colliery’s working life:

All three main elements of the winding engine house. Left the oldest tall and narrow building; next to it, continuing the roofline the brick extension; in front, the ridgeline of the nineteenth century shops (29th October 2016)

Once safely and securely erected, the scaffolding was used to removed for re-use the roof slates. Their removal revealed the rotten battens beneath, which all needed to be removed to strip the roof down for restoration to begin.

As the old and worn roof materials were removed, a temporary tarpaulin way fastened down to keep the building dry and lay a foundation for the waterproof membrane and new battens which would eventually take its place. 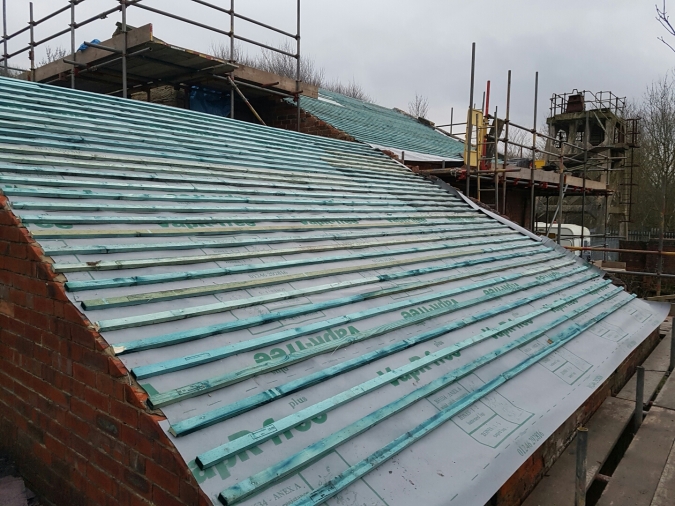 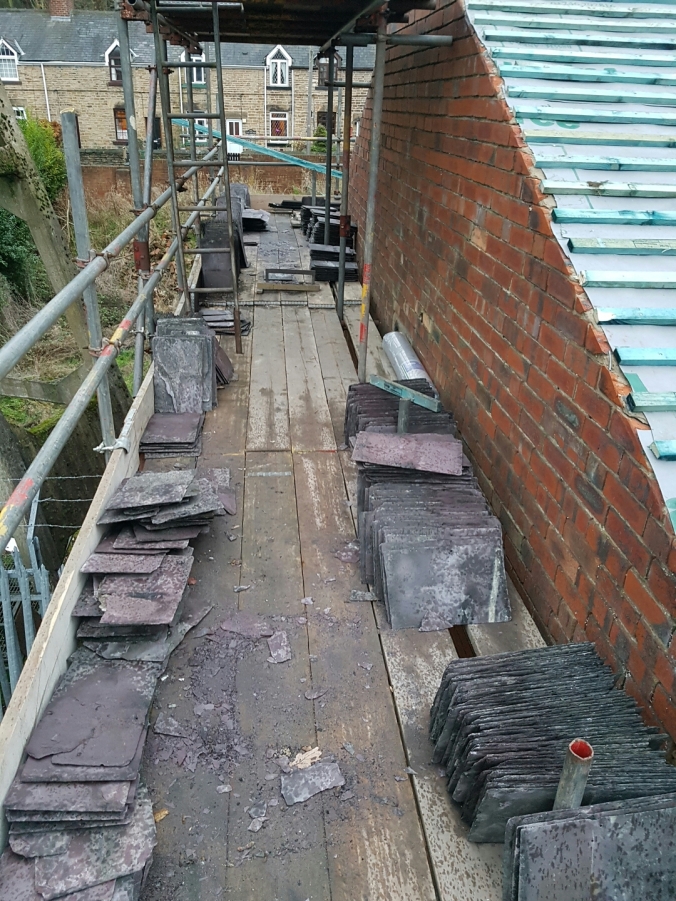 Some of the slates retained for reuse (10th December 2016)

Onto the prepared new battens, the reclaimed and reused blue slates were steadily laid and nailed in place. Meanwhile on the underside of the new roof, thermal insulation was added, improving the heat efficiency of the building. hopefully making the spaces better for visitors and volunteers, and certainly making them somewhat darker, now there were less holes! 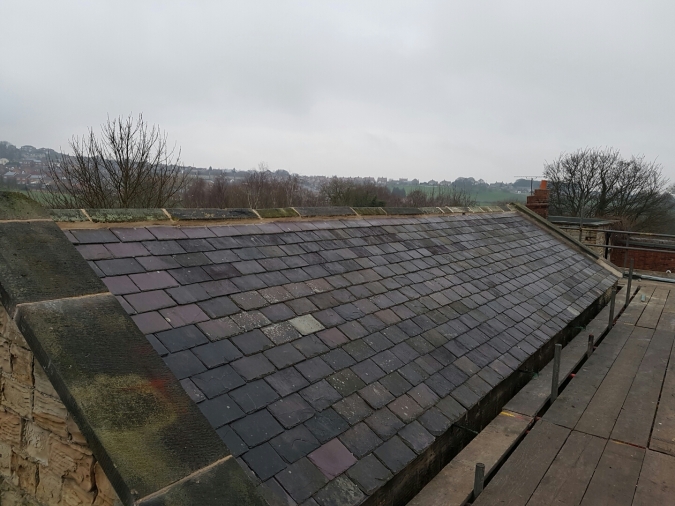 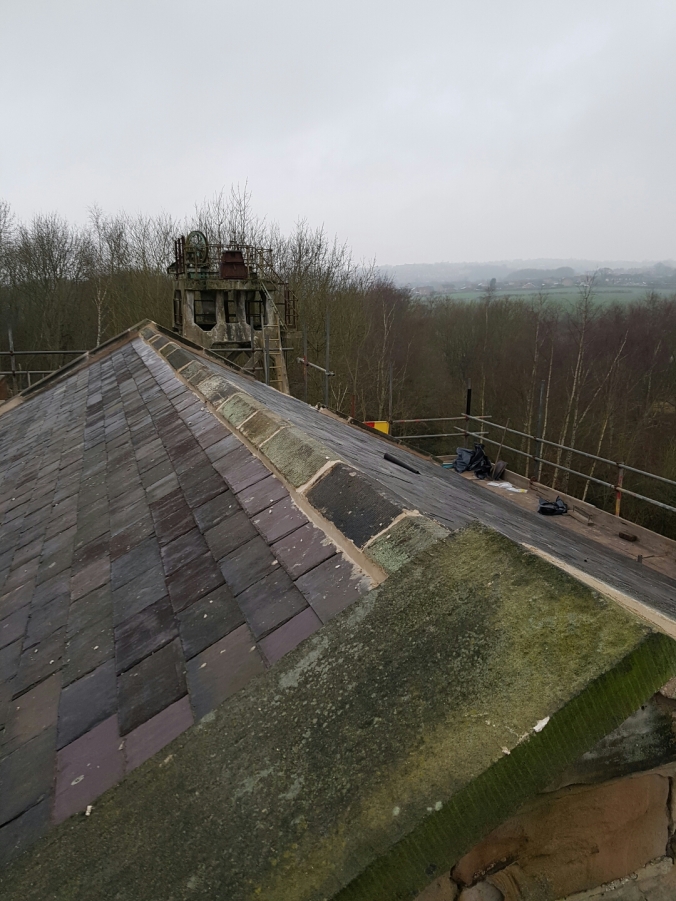 By mid January 2017 excellent progress had been made; the bulk of the re-roofing had taken place, but work remained on the flashing, guttering and drainage profile of the roof. After substantial timber replacement  in the wall board and rafters, the trickiest element of the roof to repair was the last pitch, between the narrow enginehouse and the later brick extension.

Aluminium guttering and down pipes, made to heritage standards, to appear like cast iron were added in and many points in the walls supporting the roof timbers were repointed and consolidated to strengthen the building as a whole.

In January into February the ridge stone work was put back into place on the buildings, the builders carefully leaving small apertures to allow for egress of any potential bat species in future. In January much work was done to the winding engine house window, including the insertion of a generous owl habitat box into the roofspace of the building.

Alongside the temporary owl box attached to the concrete headgear, this step marked an important sign of the delivery of the ecological goals of the restoration – supporting wildlife in the area whilst ensuring the future of the building.

In the week before the Open Day on 18th February 2017, the scaffolders returned to site, this time to remove the poles and boards and reveal the finished fruits of the roofers’ work.