Heavy clouds signaled the start of what would be a very wet weekend in Hemingfield, and an unsettled one for South Yorkshire. Site director Glen and regular volunteers Phil and Chris arrived to continue the site clearance work, but with only the odd break in the cloud for company, they decided to sound the retreat and stay dry. This gave us a chance to go and explore – and what could be better than a historical village ramble in Elsecar!

Just a short journey away from the pit (SE 39326 00919), down Wath Road (B6097) we pass the end of Royds Lane, an old farm track, but also the road that once led to Elsecar Main – Hemingfield Colliery’s youngest sibling, sunk in 1905, but now vanished from the landscape.

Following the road right, over the railway and canal bridges, we arrive at the bottom of Cobcar Lane. Pausing here, and turning around to look back towards the pit, we can try and imagine the scene from a hundred years earlier. – In fact, we can do better than that:

View from Wath Road, Elsecar back over the canal (photo postcard by Francis Reginald Haigh, 1881-1977 born in Elsecar)

At this time Hemingfield is still in production and the canal and railway connections are still active with traffic. It’s a strangely flatter landscape, with fields divided by hedgerows stretching down from Royds farm to the road. There are far fewer trees as this is long before Elsecar Main’s spoil heap was built up (all 6M cubic metres of it) and eventually grassed over. Looking at the postcard, just right of centre, steam blows across a stone chimney stack, a sign of the boiler house which powered the fan ventilating the Hemingfield and Elsecar workings, helping to keep them safe.

“..I shall give a brief sketch of the church at Elsecar. It was on Whit-Monday, 1841, when Earl Fitzwilliam laid the memorial stones of this church, and I heard him say that he was moved to build this church. It is a beautiful structure, capable of accommodating 500 hearers. It was open on Whit-Monday, June 6th, 1843, at a cost of £2,500, defrayed by Earl Fitzwilliam, who endowed it with £1,000 three per cent. stock. Mr Wilkinson was the first minister […] I was present at the first interment at this church a little more than 33 years ago, and I was present again yesterday, December 24th, 1876, when there were three more funerals […] which numbers from the commencement 1,655, and the greater part of the adults at this church I have known in the flesh, and not a few which were very dear to me.”

Pressing on past the houses, we come across the end of Wath Road, and the entrance to the Heritage Centre and workshops.

Here we find a host of new shops, established businesses and a visitors centre, together with a heritage trail and a series of interpretation boards full of information, using images and original documents to tell the stories of the village. 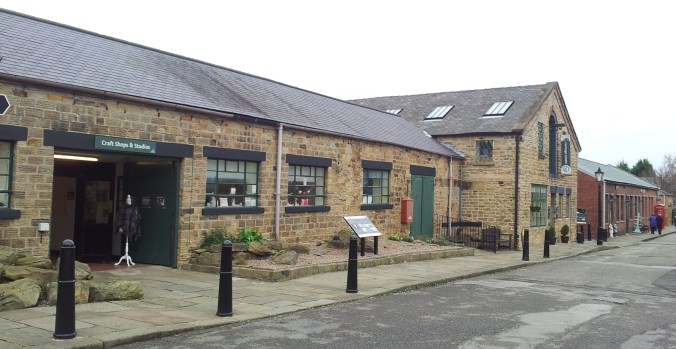 Sanctuary from the storm: Elsecar workshops and the visitors centre

Straight ahead from the entrance, the aisled workshop dominates the view. Built around 1850 it became part of the Elsecar works – a central establishment to handle all of the repairs, ironwork and stores for the Fitzwilliam ironstone mines and collieries in and around Elsecar and also Low Stubbin. The New Yard was built under the superintendence of Benjamin Biram, from a suggestion by John Hartop, manager of the ironstone mines at Skiers Spring, and later General Manager after Biram’s death in 1857. Today these managers names have been given to internal street names within the heritage centre. 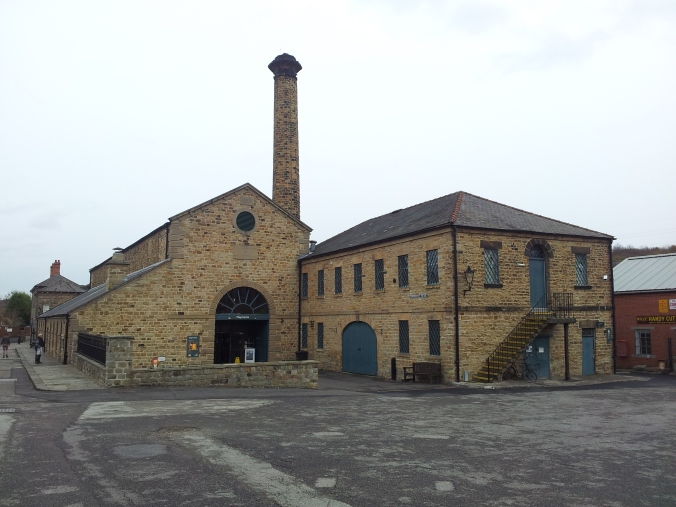 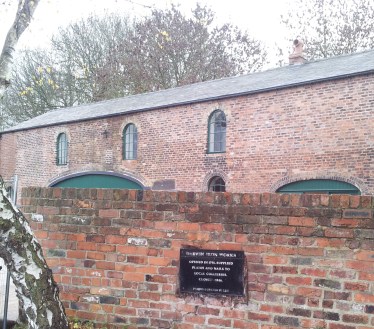 Ironwork and ironworking are at the heart of this site. The surviving buildings have been much modified over time, but it is still possible to discern elements of the earliest ironworks at Elsecar – those of Darwin & Co. Indeed there are some impressive ironwork elements in the construction of these buildings. Though later taken over by Earl Fitzwilliam himself and managed by John Hartop’s father, Henry Hartop for a time, the Elsecar and Milton ironworks were both eventually leased to George and William Henry Dawes in 1849. George Dawes continued to run the business until the 1880s when trade declined and the lease ended without renewal, leading to demolition of Milton ironworks and portions of Elsecar ironworks. What remained was consolidated as the Elsecar works.

Undoubtedly the jewel in the crown for Elsecar is the existence and remarkable survival of its Newcomen type engine. An atmospheric engine which owes is design to Thomas Newcomen, but whose preservation from 1918 onward is closely linked to the history of Hemingfield Colliery, through the work of the South Yorkshire Pumping Association and later, the South Yorkshire Mines Drainage Committee before being maintained by the National Coal Board/British Coal until 1986 when Barnsley Metropolitan Borough Council took over.

Recently the volunteers and Friends of Hemingfield colliery were delighted to be invited to attend a training session on the operation of the engine in its conserved state. We’re honoured to offer our assistance in preserving and promoting the oldest steam engine in its original position anywhere.

Much recent research on the engine has been conducted as part of the Heritage Lottery Funded project to preserve and reinterpret the engine and the wider village. A pioneer in uncovering the mysteries of the engine was local miner and noted local historian, the late Arthur Kay Clayton who presented a paper to the Newcomen Society in 1963 on the subject of the engine which revealed the date of the Newcomen engine was in fact 1795.

Best known perhaps for his 1973 history of Hoyland Nether, Arthur Kay Clayton researched and wrote a huge volume of newspaper articles and notes on aspects of the history of the Fitzwilliam estates, the local villages and especially their industrial undertakings. Barnsley and Sheffield central libraries are blessed with copies of much of his unpublished, typescript work from the 1960s. A lifelong researcher and historian, his last research notes were written up in the mid 1990s and can now be found at the Discovery Centre in Barnsley Town Hall.

There is still much to discover, to understand and fully explain, but it is thanks to the recollections, research and patience of local people like Mr Clayton that we today have access to so much information about Elsecar and its development.

With time pressing, we were ready to leave the workshops, though there is much more still to be investigated. Stepping out of the workshops next to the Market Tavern, we see Milton Hall (Grade II listed, No.1293411). Built as a covered Market Hall for the then busy village, with its collieries, ironworks, and gasworks, it was later used for assemblies of all kinds, exhibitions, presentations and, more recently, beer festivals!

And so we bid farewell to Elsecar, passing the Miners’ Lodging House, or Fitzwilliam Lodge (Grade II listed, No.1151092) on the way up to Hoyland Nether, and on towards Barnsley Road and the junction with the M1.

All-in-all, it has been a delightful walk, with lots to see and places to relax with a cuppa and dlice of cake, as well as to reflect on how industry shaped people’s working lives, and through the buildings and local histories passed down, to engage with the amazing heritage in and around the village.