The Friends and their doubty volunteers looked skywards this past weekend as the heavens opened and the water descended. There was every likelihood that the weather would indeed stop play. However, our volunteers are most definitely made of sterner stuff, and donning waterproofs and not a modicum of plucky determination, they set forth to Hemingfield, to get stuck in to another day of site clearance activity. 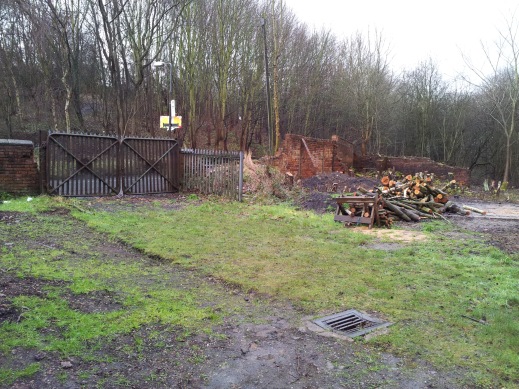 Site Director Glen came on site first, with hardy volunteers John and Chris driving from the Peak, joined by regular volunteer Chris, and finally volunteer and site archaeologist Nigel. With the exposed excavations filling with rainwater, it was decided to focus the day’s efforts on continuing the vegetation control – felling invasive trees, clearing the bramble, the weeds and branches from around the back of the site, on the lower terrace. 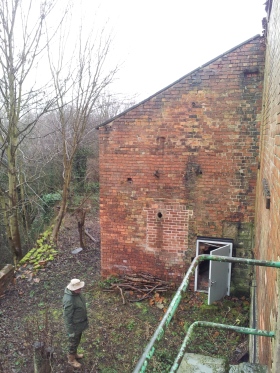 More often associated with mediterranean climes, Hemingfield pit nonetheless possesses its very own terrace with views down across the valley, over the Elsecar Heritage Railway, the Dearne and Dove Canal, and down on the TransPennine Trail. This part of the site has a fascinating history, still largely unexplored, which the Friends are starting to pin down through their ongoing programme of archival research and archaeological investigations on site.

The lower terrace, looking up towards the main winding headgear on the top level. Note the change of brick on the near-facing wall

Viewed from from the lower terrace, the standing structures are a confusion of different periods: traces of the Victorian pit clearly remain – the huge sandstone blocks underlying the later brickwork; but we also see Victorian brickwork, mixed with twentieth-century extensions, and the stopped-up windows as the site was being visited less and less. All of these clues provide food for thought and further research if we are to begin to piece together the phases of building history, and the sequence of industrial uses.

Lower terrace buildings, March 2015. Note use of bull-nosed (rounded) bricks to head height on left-hand corner of building – a subtlety not found in the later brickwork.

There have clearly been many changes since the 1880s, during the coal-winning years of the pit under Earl Fitzwilliam, compared to what came after May 1920 when the colliery had been sold to the South Yorkshire Pumping Association.

In the 1880s the pit was working as normal, employing a full complement of between 200-300 workers; deputies, colliers, packers, trammers, enginemen and the various surface workers employed in the canal and railway distribution of the Barnsley seam coal.

After 1920, we know that the colliery’s screening plant was removed, along with the canal delivery and loading staging, and many of the ancillary surface buildings – some of which the Friends are now beginning to rediscover through surface excavations.

A glance at an engraved image of the pit, from an 1880s billhead, compared to a photograph from 1921 raises some intriguing and instructive contrasts (not least, artistic licence!). Looking at the pit from the canal-side, and reading the site left-to-right, from the pumping shaft headgear towards the winding shaft, we see:

Historical reflections aside, the Friends pressed on to reclaim the site from the ravages of neglect. As the rain continued to fall, a large pile of hawthorn, brambles and weeds was amassed as the lower terrace area was slowly cleared. Though the bonfire struggled against the wind and rain, the volunteers kept their spirits up and – the odd choice salutation to hawthorn spikes aside – looked forward to lunch. 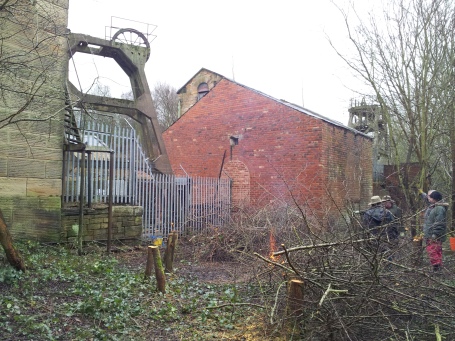 After lunch, Nigel, together with Glen and John, reviewed the current archaeological activity on site, and discussed the planned priorities for the site. When better weather returns, the excavations will continue, revealing more of the building features discovered to date, and also carefully removing the next layer of yard surface. These activities  provide opportunities for Friends and volunteers alike to learn new skills, undertaking industrial archaeology sessions on site open days and working parties. Nigel as Site Archaeologist is leading on the recording and drawing of work thus far, and we are excited to see what further subsurface remains we can find, and whether they can fill in some of the gaps in our knowledge of the development of the colliery.

After another few hours of chopping, sawing and clearance, the weather showed little sign of improving, so the volunteers packed up the tools and called it a day; making a hasty retreat to grab a hot drink and some dry clothes!

Meanwhile, in other news, the Friends and volunteers were delighted to discover that, contrary to the last update on the fate of Wentworth Woodhouse, this week saw the fantastic announcement that the offer of the Wentworth Woodhouse Preservation Trust, supported by a number of donors and grants, had been successful in securing the property for £7M. This marks the beginning of what will hopefully be a wonderful, renaissance for Wentworth Woodhouse, perhaps the greatest forgotten Palladian mansion in England.