Hemingfield Colliery in its glorious setting.  A lovely photo by Chris Jones.

A Rustling for the May Queen

Saturday 14th May was a particularly bright and sunny Spring day at Hemingfield Colliery. Other than the chirping and twittering of happy birds, and the whisper of a light breeze gently swaying the lilac trees on Pit Row, the morning was quiet. As the working day wore on, the rural peacefulness would be lightly broken by the occasional phut phut, hiss and whistle, as steam trains slowly chuntered past on the Elsecar Heritage Railway line below.

Hemingfield  Colliery stands in a particularly beautiful rural location, on an elevated platform overlooking the heritage railway, the canal and the valley beyond, with its vibrant green and sunshine yellow fields and the village of Hemingfield on the horizon.  This idyllic spot is enhanced on the opposite side by the presence of many beautiful, rustling and shimmering trees which, over the years, have colonised and now completely cover the mine spoil heaps above Pit Row.

On this day, the particularly brilliant sunlight permeated deep into the pumping shaft, allowing a clear view down into its usually dingy depths. Shrouded in blackness and mystery on more overcast days, at other times of the year we can only peer with squinted eyes, or with the help of torches, into the murkiness below, and listen to the constant drip, drip, drip of water plummeting into the darkness.

Below the shimmering surface of the water lies a 400 foot deep flooded shaft!

But on this sparkling Spring day, the sun filtered through the safety grill across the mouth of the pumping shaft, throwing checkered shadow patterns onto the crumbly walls below. A particularly strong shaft of sunlight highlighted a large Hart’s Tongue Fern clinging tenaciously to the brick wall halfway down the shaft. Like most species of fern, in the wild the Hart’s Tongue Fern grows in caves and gorges and in other damp and shady places. At Hemingfield Colliery, the pumping shaft provides these plants with a habitat similar to the ones they love in the wild.

In the bright sunlight, we could also clearly see some interesting industrial features, such as the archway constructed into the side of the shaft to take the original outfall pipe from the mine pumps. A little lower down in the shaft, the replacement 1920’s pump pipe is still in situ. This exits the shaft through a rough hole knocked through the masonry. It is amazing to think that, below the shimmering surface of the water lies a 400 foot deep flooded shaft.

John was the early bird volunteer on this particular working party day and had already embarked bravely on what would turn out to be a particularly mammoth task – the removal of a giant tree stump with roots clinging with an iron grip onto the wall of the pump house/ switchgear building.

John attempting to winch out the stubborn stump

Nigel and Amanda arrived a little later, closely followed by Chris, to catch Hemingfield Directors Glen and Ian having a catch-up chat and a wander around the site, checking on clearance work and archaeological progress so far. Phil, our Education Co-ordinator, and volunteer Keith, popped in later in the day, offering advice and moral support.

The pump house tree stump was to prove particularly tenacious as John grappled with its removal throughout the day. Occasionally assisted by Chris on brief breaks from archaeological team work, John began by removing the soil underneath the stump and then wielded hand-saw, axe, crowbar and sledge hammer in turn to chop away the roots and attempt to winch out the stump. Glen revved up the chain saw at regular intervals, slicing through the thicker and tougher roots. Eventually, after some hours work, the stump began to appear to be floating on thin air, but was still lodged firmly in position against the pump house wall, clinging on to the bricks with long horizontal side roots.

John gets to grips with the stump…

…and so does Chris!

As John christened the unyielding stump Stumpy McStumpface, the conversation inevitably turned to the silliness/inventiveness/creative disobedience (depending on your viewpoint!) of the great British public. During our discussion, the team also learnt more about John’s interest in and research on the coal mines of Sheffield and of his plans to publish his work. We have a very diverse and creative team of volunteers at Hemingfield, our members having varied research interests, which range from the mining industry in general, to mines drainage, education, social history, natural history and industrial archaeology.

The layout of the industrial features and the archaeology of the site are now becoming a little clearer, with the 1920s and 1930s cable channels having been excavated on previous working days. With some supervision from Glen and advice from archaeologist Nigel, the excavations continued.

These began with the removal of a modern concrete layer which has been laid over a brick floor from an earlier period. Amanda began to bash away at the concrete layer with a heavy sledge hammer, cracking and shattering it like a biscuit. No-one can say that volunteer work at Hemingfield is not a great way to build up biceps and improve upper body strength, as well as easing away the strains of the working week. Come and join us if you need to relax and get fit! 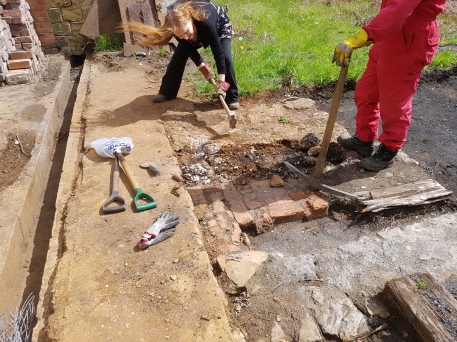 No need for the gym! Amanda smashes out a concrete layer to reveal an earlier, more interesting, feature

Meanwhile, Nigel and Chris cleared away the resulting rubble, trundling it away in wheel barrows to another part of the site. All of the various materials (bricks, stone, rubble and earth) that we remove during our excavation and clearance work are to be kept and recycled. We aim to reuse as many materials as possible in the construction of the proposed mining heritage centre to be built on site.

As the concrete layer was removed, a well-laid and carefully constructed red brick floor was revealed. The team debated the reasons why this concrete layer might have been laid over the brick floor. In a clear case of function over aesthetics, there must have been a very good reason for someone’s decision to lay the concrete layer, although it might appear odd to us today, in an era in which the beauty of old period features, and the skill involved in their construction, is greatly appreciated. 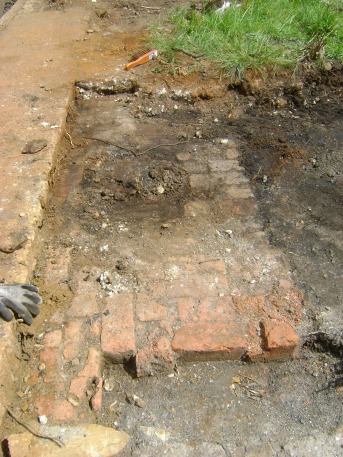 The next phase of the archaeology saw the team move along the site in a southerly direction toward the boundary wall alongside the B6097 road, along which Pit Row is situated. Nigel pegged out a rectangular area with his distinctive sunshine yellow string line and rose-pink pegs and then Chris and Amanda helped him to remove the top turf layer from this area. Their spades and shovels sometimes cut through the turf like knives through butter, but all too often they came across stubborn tree roots and large stones which impeded progress. Every so often, John would break off from his work on the tree stump to help the team saw or axe the roots away. Once the top layer of turf had been removed, the loose soil beneath was shovelled away, with Chris, John, Amanda, Nigel and Keith all taking it in turns to lend a hand.

This excavation revealed an extension of the former yard surface and also part of the foundations of the demolished boiler house. 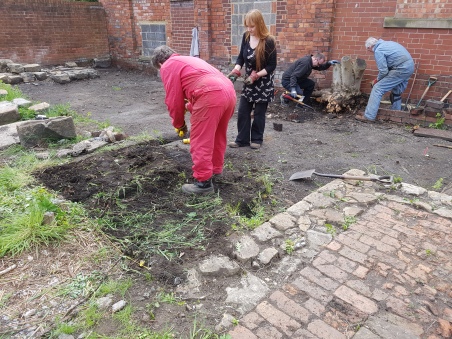 In our next session, we will extend this area of the trench to try to find the limits of the extensions of the former yard surface and to (hopefully!) uncover evidence of the demolished boiler house chimney. We think this to be underneath a spoil heap near the southern boundary wall. The boiler house and the chimney are shown in a Victorian illustration of the colliery, but as yet, little is known about these crucial features of the site.