Hemingfield Colliery has become a wild flower meadow this June. An impressionist painting of colour, light and movement meets the eye, as myriad plant species sway in the breeze and glisten in the early summer sunlight. The Bracken, which dominated the site last year, has been beaten into submission, allowing a number of other plants to thrive in its absence. Sunshine-yellow Common Hawkweed mingles with purple, pompom-like Red Clover. Dramatic swathes of Ox-eye Daisies dominate the scene. Their immaculate snow-white ray florets and egg-yolk yellow fractal centres are surrounded by delicate clouds of quaking Yorkshire Fog and Cock’s-foot, just two of the grass species standing tall amidst masses of sticky Cleavers.

In common with many other plants thriving at Hemingfield, such as Dandelion and Nipplewort, Common Hawkweed and Ox-eye Daisy are members of the Asteraceae family. This plant family is able to colonise abandoned industrial sites, partly due to the masses of seeds which each individual produces and disseminates into the environment. Each seed is whisked away from the parent plant and borne aloft on the wind by means of a feathery parachute of tiny hairs. These ‘cypselas’ are able to travel great distances, either alone or in fluffy masses, and then lodge themselves into the soil of any area of undisturbed land. Once the seeds have germinated and the plants are established, their long tap roots reach deep into the earth, ensuring their tenacity and longevity on the site.

The Ox-eye Daisy has pure white ray florets, with egg-yolk yellow disc florets arranged in fractal patterns at its centre

In contrast with the thriving meadow on the undisturbed part of the northern end of the site, the vegetation on the opposite side of the switchgear building/pump house was removed during our clearance work and archaeological excavations over the past 18 months. However, the soil spoil heaps created by our reclamation work have seen a swift invasion and establishment of plants which favour disturbed soil. Almost bare only a month ago, nature has now decorated the grey-brown heaps with splashes of welcome colour. Here, Pale Willowherb petals add delicate pink dashes, while Herb Robert flowers contribute tiny purple dots to the Pointilist composition.

As Nigel and Amanda arrived, Site Director Glen was already on site busily walking back and forth with his strimmer, removing some of the fresh Spring vegetation. This was to allow easier access for our volunteers to park their vehicles, as parking is very difficult on Wath Road which runs alongside the site. The removal of this vegetation is regrettable, but it is necessary for the conservation and future use of the site. As we clear and prepare the area for the development of a mining heritage centre, we also plan to establish an official wild flower meadow here in the future.

The volunteers began the day by extending the excavation area to the north east. We now estimate that we have cleared about a third of this side of the site, which extends away from the switchgear building/pump house, alongside the Wath Road boundary wall, towards a demolished toilet block in the north-east corner. Our last working day uncovered the remains of a clay and stone floor surface, together with a brick-built post footing. The floor surface is adjacent to the stone foundations of the demolished boiler house and it looks like the boiler house had been extended with the addition of an open-sided working area, which was covered by a lean-to roof.

The team continue with clearance work, in search of the elusive base of the boiler house chimney!

The aim of this week’s excavations was to uncover more of this lean-to building and also to try and locate the remains of the boiler house chimney, which was demolished in the 1920s. Volunteer John, assisted by Amanda and Nigel, began enthusiastically digging away more of the vegetation and topsoil. The going was tough; this part of the site is covered by a one metre tall mound of brick rubble, which is all that remains of the original colliery boundary wall. When this collapsed into Wath Road, Coal Board engineers simply bulldozed its remains back into the site, before rebuilding the wall.

As John, Nigel and Amanda dug and shovelled and regularly trundled away wheelbarrows full of earth, stone and broken brick, other volunteers Alan and Chris soon arrived to help, whilst Site Director Glen, after finishing his strimming, attacked the larger lumps of brickwork with a sledgehammer. 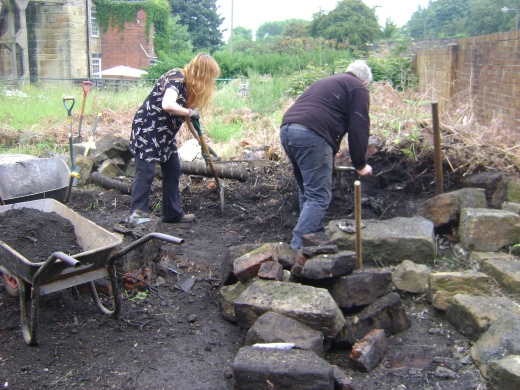 Clearing the mound of rubble that constitutes the remains of the original colliery boundary wall. In the foreground you can also see what we think to be stone from the demolished boiler house chimney

This organised teamwork soon began to give results and, by the end of the day, the excavation area had been considerably enlarged. Sadly, however, there was no sign of the base of the demolished boiler house chimney. This means that we will have to extend the excavation area again next time, until we can locate its remains. Archaeology can often be frustrating like this, but patience and perseverance usually bring results. After all, it took Howard Carter 31 years of digging in Egypt before he discovered Tutankhamun’s tomb! On the plus side, this week’s excavations did confirm that the large stone-built structure running alongside the current Wath Road boundary wall is not an earlier boundary or building, as we previously thought. Instead, we now think that it may represent stone from the demolished chimney, which was carefully stacked on site to save the expense of carting it away.

No sign of the base of the boiler house chimney! But the stack of loose stones may be part of the demolished chimney itself

We Can Rebuild It!

We may not have found the large structure that we were hoping to uncover on this particular working party day, but we did come across an interesting array of smaller artefacts, each of which can add to our knowledge of the colliery site and its history. Many of these small finds relate to the site’s use as a garage during the 1960s. As we shovelled away the dull, matt-brown earth, the silvery glint of metal regularly broke through and many car-related items, such as bumper trimmings, headlight housings, fuse boxes and brake pedals, were pulled from the soil. The team jokingly discussed the remote possibility of uncovering enough Austin parts to actually rebuild an entire car! 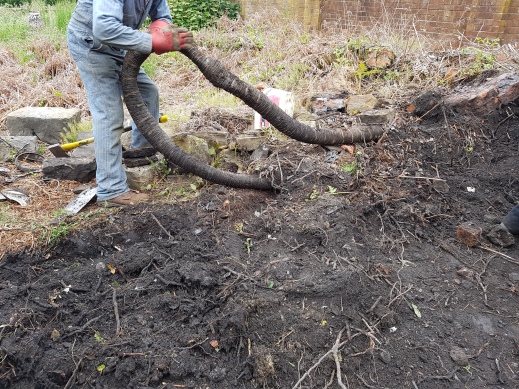 John wrestles with…. what?! A sinister anaconda? Something from the movie Tremors? Or a heavy-duty water pump pipe?

Other artefacts uncovered include an old table lamp, a stamped bar of solder and many square iron nails, which may have come from the demolished lean-to that once stood on this area. John’s digging also gradually revealed a heavy-duty water pump pipe, curled up like a sinister anaconda. This seems to be of a considerable length, the end of which we hope to locate next time! A number of the small finds will eventually be discarded as undiagnostic items, or items which cannot really tell us anything of interest about the site. Those artefacts that are of historical importance will be kept, catalogued and used to help interpret the site for the archaeological record and for the interest of visitors to our proposed future mining heritage centre at Hemingfield Colliery.

The results of a hard day’s work.

Next Time – Happy Birthday to us!

Our next Open Day and Working Party is on June 25th, when we shall also be celebrating the Friends of Hemingfield Colliery’s second birthday. Come and join us as we reflect on our progress over the past two years and discuss our plans for the future of the site.