The Friends of Hemingfield Colliery are entering a busy time of year, with a series of events to attend, and planned activities to share and join in with ourselves.

This early weekend, from Friday to Saturday was a celebration of the spirit of volunteering at the colliery and by the colliery in the Elsecar valley which we are proud to call home. 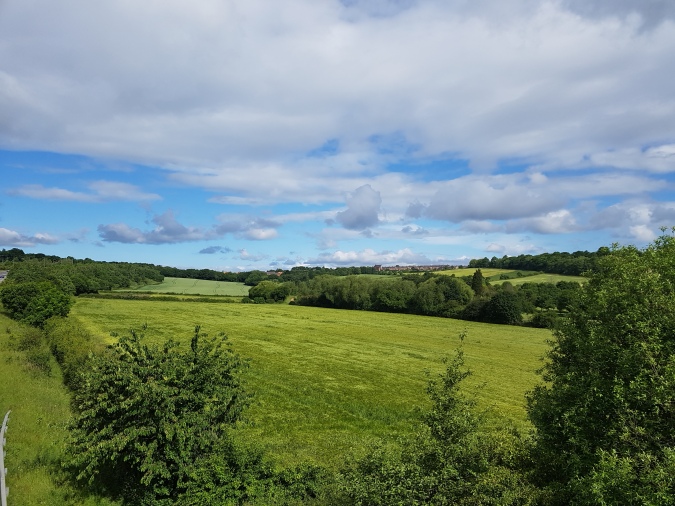 Working with our friends at Elsecar Heritage Railway, on Friday 9th June the pit was delighted to welcome the return of the great group junior soldiers from Burma Company, from the Army Foundation College in Harrogate.

The Burma Company crew arrived by coach, in bright sunshine down the motorway and Dearne Valley Parkway.

After a briefing at Elsecar, the junior soldiers walked the last half mile to reach the colliery where they were greeted by regular volunteers Nigel, John and Chris who had opened the site ready for work. 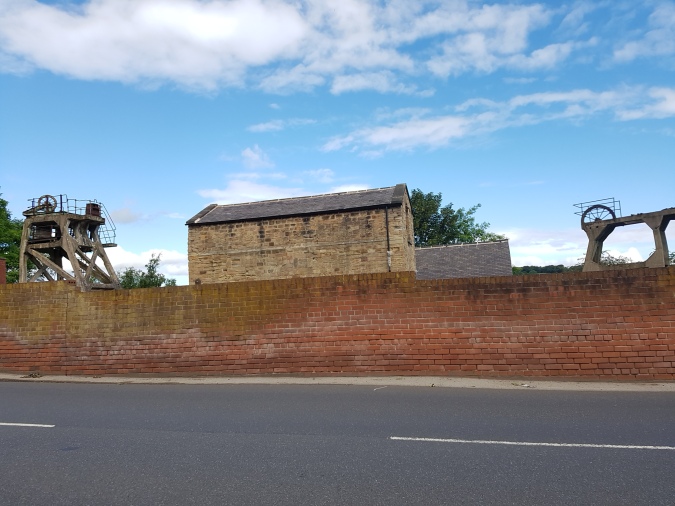 This being their second visit to us this year, the group of junior soldiers got straight to work, on three different tasks.

Getting stuck in. Digging the soil away from the front wall.

Firstly clearing spoil heaps away from the front wall of the site. This wall had suffered significant damage over the years as vandals remove bricks, reducing the security of the site. The Friends aim to plug the gap shortly. 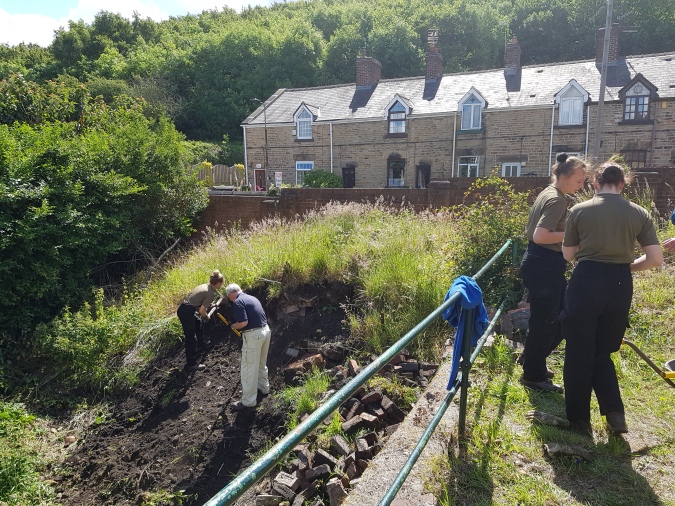 Hard at it. Digging it the demolished wall bricks and barrowing them over to be cleaned and reclaimed

The second group worked on brick reclamation from the mound of wall demolition on the lower end of the site. 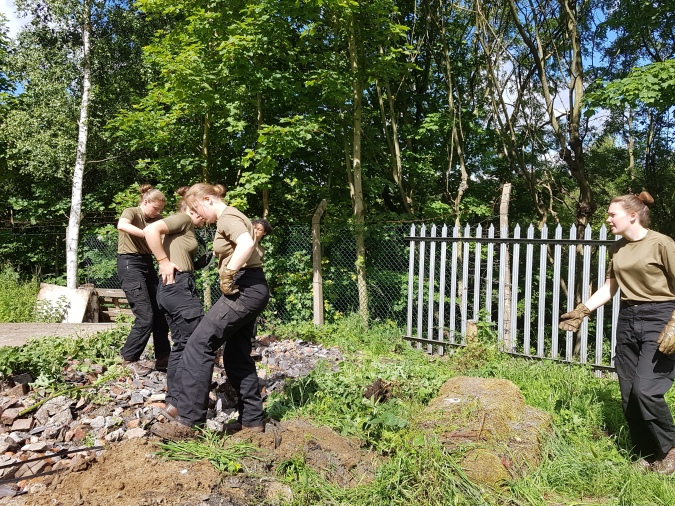 Shifting rubble. Moving a huge amoubt of rubble down to the Elsecar Heritage Railway for use as hardcore

And the third team worked on shifting the large amount of rubble accumulated by the concrete pad, transfering it to provide hardcore for our friends at Elsecar Heritage Railway as they plan for future facilities at Hemingfield, by the railway line and canal basin. 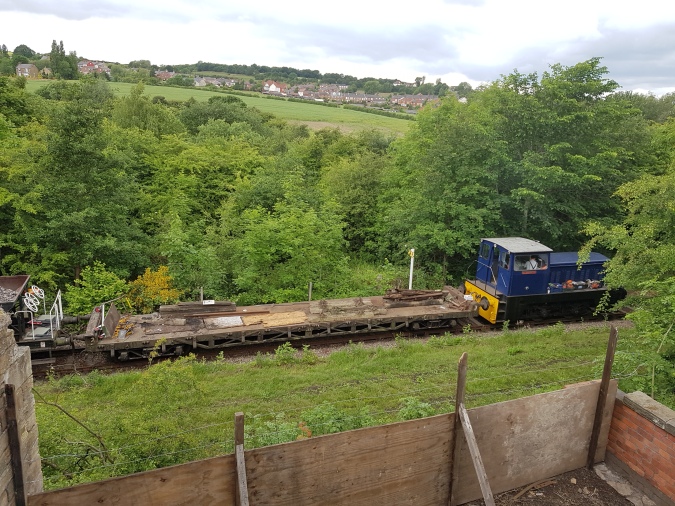 Freight train. Engine carrying ballast and materials down the line for junior soldiers working with the EHR.

Elsewhere a further contingent of the AFC junior soldiers were helping with EHR works, as we saw when a works run went by below the pit, carrying ballast and sleepers down the line.

It’s great to see activity in the pityard and down by the railway line; to see the area come alive, and voluntary work being done that helps improve the area, as well as sharing conversation, jokes and the odd ice cream!

Perhaps slightly unexpectedly, the soil, bricks and rubble shifting revealed more than its fair share of frogs and toads spread around the site.

The junior soldiers took time out to admire the wildlife, enjoying the sunshine on site. 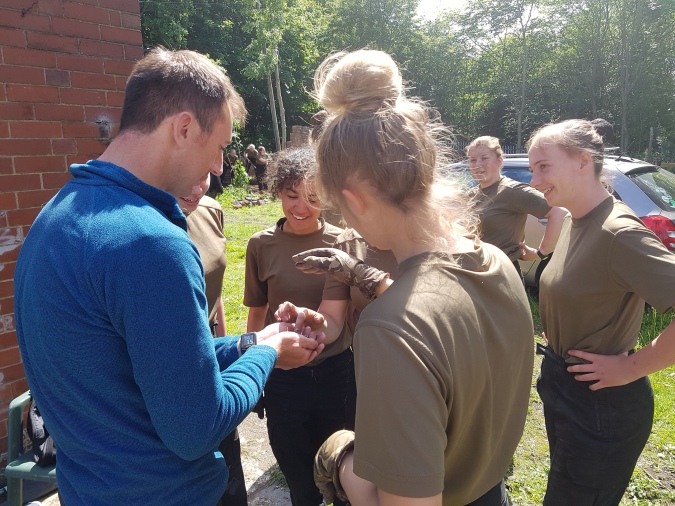 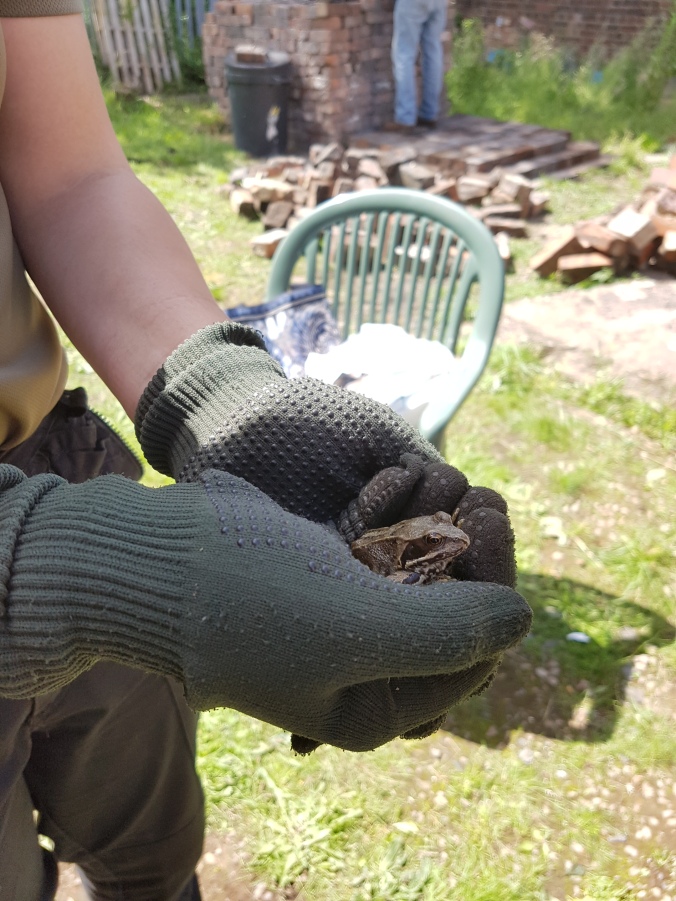 Up-close with the wildlife on site

At the end of the day on Friday, the difference was clear: many hands do indeed make light work.

A mound, moved. Thanks to Burma Coy

Our sincere thanks to the fantastic junior soldiers for sharing their day with us.

Great group of junior soldiers. Thanks for your work!

Saturday 10th was a slightly different affair; time for the Friends themselves to get out and about and join in the community litter-pick down the old towpath of the Dearne and Dove Canal. Some of the Friends joined up with representatives of the Barnsley canals group, Elsecar Heritage Railway and Barnsley Council. But first, we had some tidying of our own to complete.

Friends director Glen and regular volunteers Keith and Nigel set to cleaning up the remaining bricks the junior soldiers had unearthed yesterday: 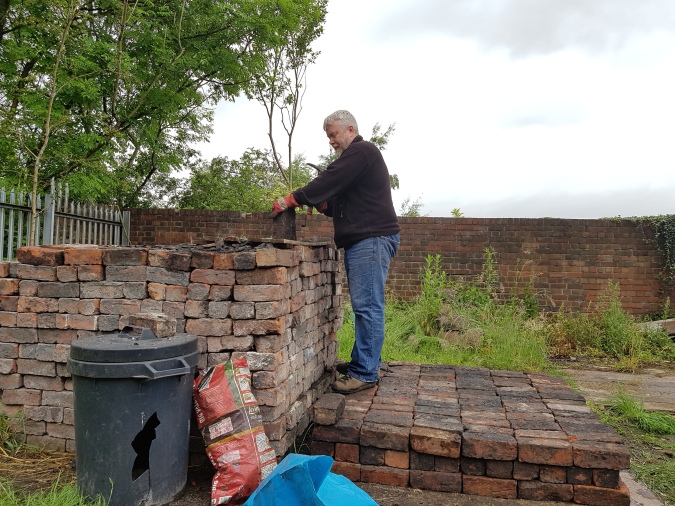 We also swept and shovelled all the leaf-fall, grit and rubbish outside the pit gates: 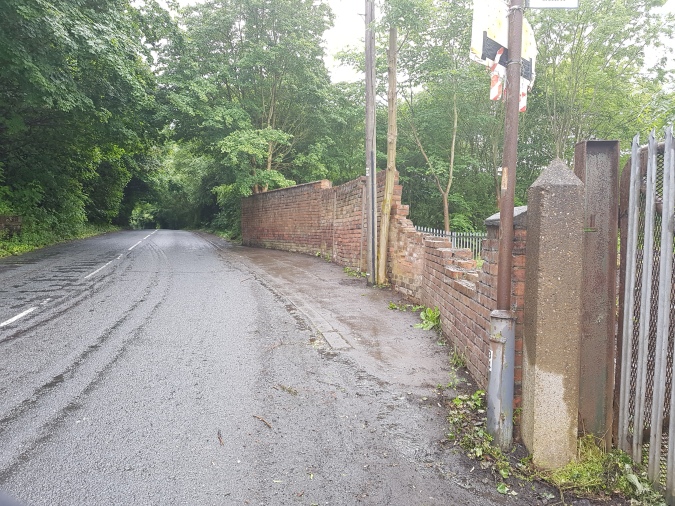 Spick and span. Keeping the front and roadside tidy

Before closing the gates and heading down the road to Elsecar.

Looking back down Wath Road at the colliery

Once at the Elsecar basin, we met up with the large contingent of guys from Burma company, Army Foundation College, Harrogate, and the Tidy team and were kitted up with bags and pickers, and sent on our merry ways, but not before admiring the Elsecar Heritage Railway yard, and the junior soldiers shovelling ballast. 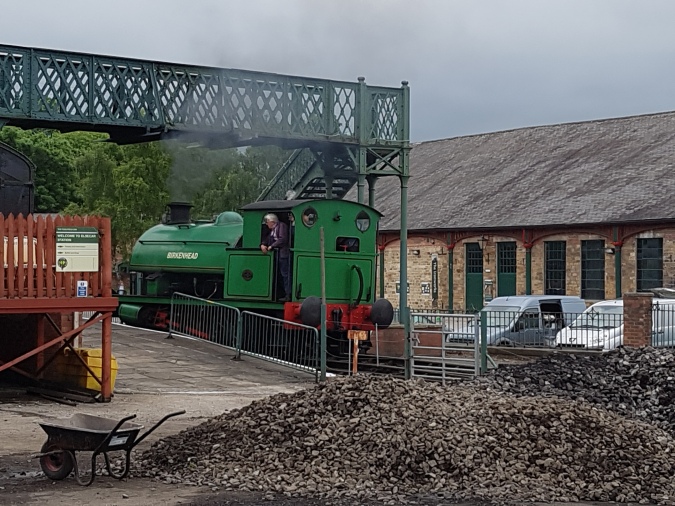 Birkenhead steam engine, with ballast piles in the foreground. Tonnes were shifted by the Junior Soldiers

With groups spread out around the village to collect as much as possible, and the earlier rain giving way to warmth again, the FoHC crew headed up behind the Ironworks to clear the footpaths around the woods between Elsecar and Wentworth. 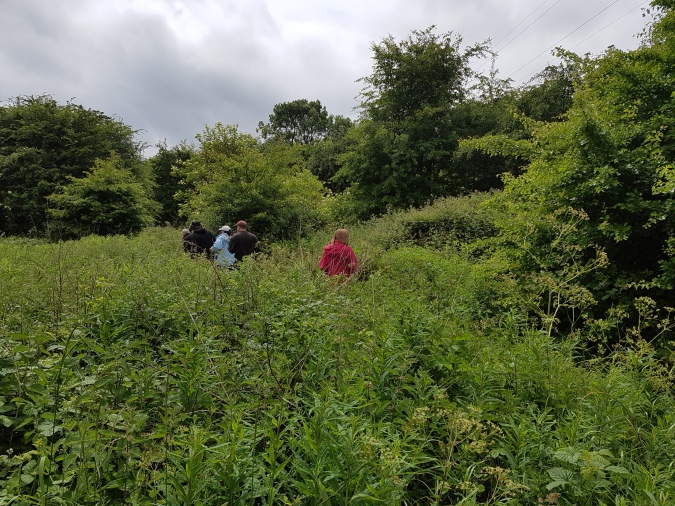 Off in search of litter, and some historical musings, in the fields behind the Heritage Centre 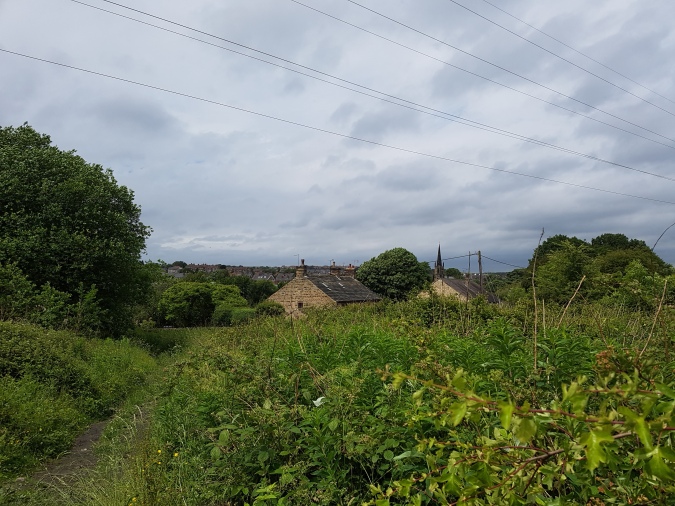 Looking back down across the fields to Elsecar church

After another busy afternoon tidying and enjoying the (mostly) warm weather the volunteers and junior soldiers packed up and headed home. 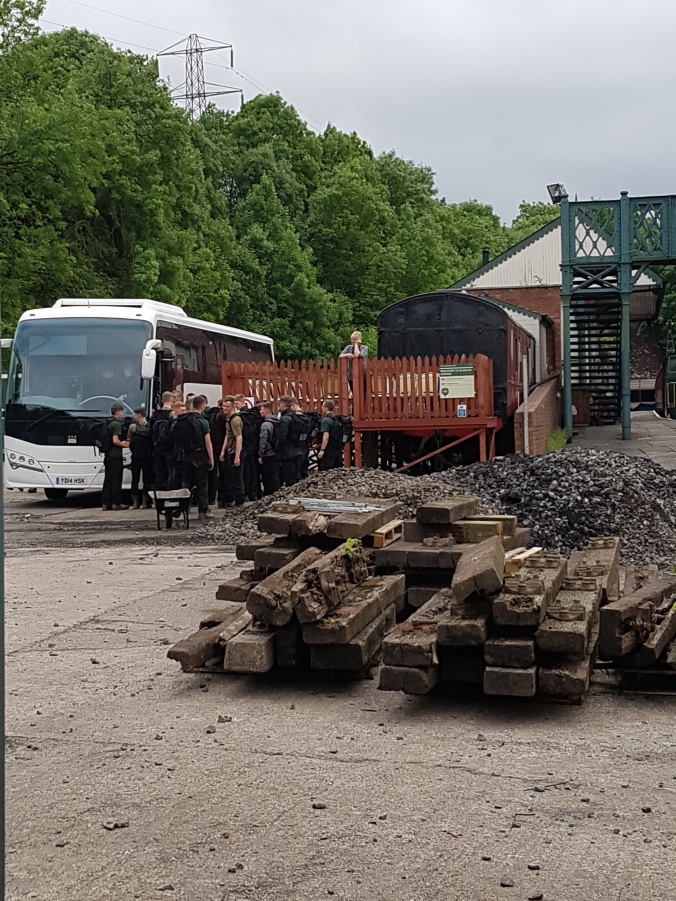 End of the day. The junior soldiers boarding the return journey to Harrogate