Following on from a busy couple of public openings and community event activities in September with the Heritage Open Days and Elsecar by the Sea, this weekend was very much time to get back to work, with the Friends of Hemingfield Colliery and volunteers being joined by the fantastic junior soldiers from Waterloo Company, joining us from the Army Foundation College in Harrogate.

The assistance and support from the AFC soldiers is thanks to our friends at the Elsecar Heritage Railway who work with the AFC offering regular volunteer hours with trackwork, rail depot and lineside tasks providing some great team working and learning opportunities alongside some honest graft.

Friends Chairman Steve and Site Manager Glen opened the pit gates on Saturday 16th, joined by regular volunteers John and Keith and new volunteer Mike. They they were delighted to welcome the junior soldiers from Waterloo company with their commanding officers from Harrogate. 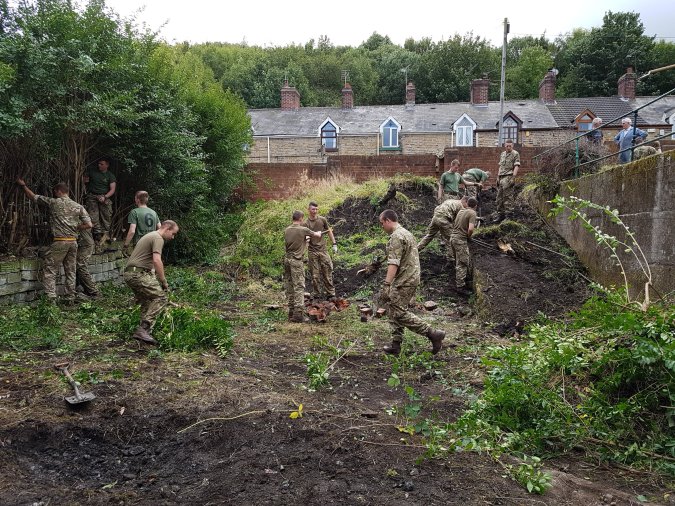 After setting down their kit and dividing into small groups, the junior soldiers were tasked with cropping back the overgrown privet hedge; removing the remaining tree stumps from the top level; getting stuck into clearing away more of the rubble from the ramp between the upper and lower levels of the site and reclaiming the bricks. 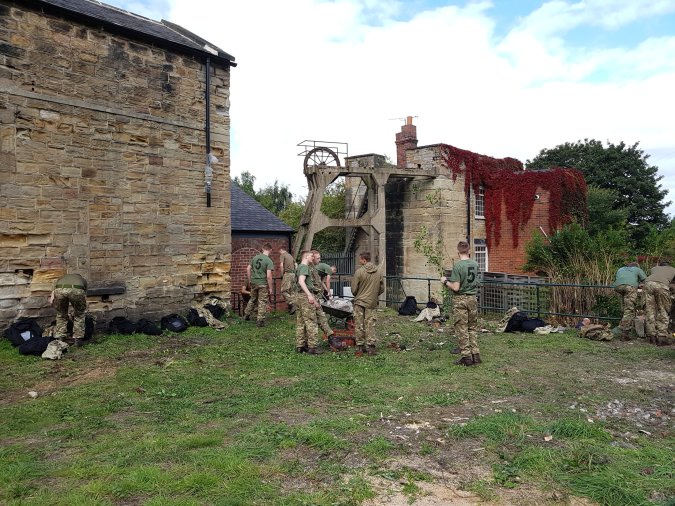 No stump too big: taking turns taking an axe to a stubborn stump on the ramp

The weather, though threatening the odd dark cloud, stayed largely decent: bright and warm enough to enjoy in t-shirts while there was still work to be done.

After a busy morning, the team paused for lunch. Being joined by regular volunteer Chris, it was great to listen to the junior soldiers experience of their long course at Harrogate. What they had done, where they came from and where they planned to go at the end of training. 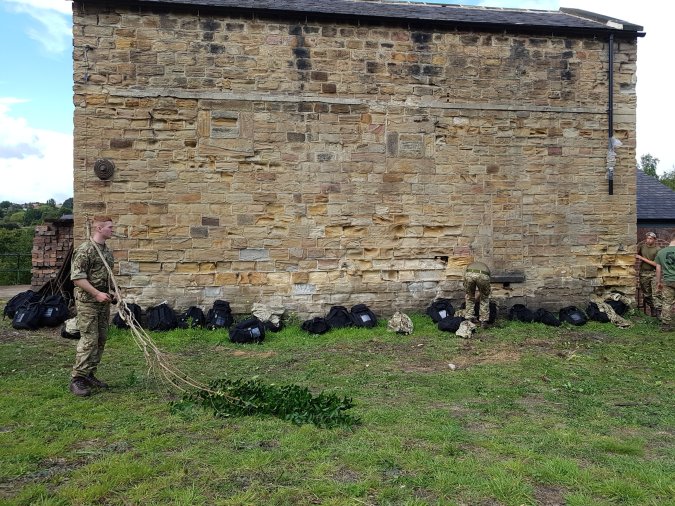 Kit bags by the engine house. Hedge branches on the way to a bonfire

Picking up tools once more, the teams continued chopping, digging, stacking barrowing and clearing well into the afternoon. Late into the afternoon an additional contingent of junior soldiers from Waterloo Company arrived, and even more hands made even lighter work on the ramp area, and around the back of the winding engine house. 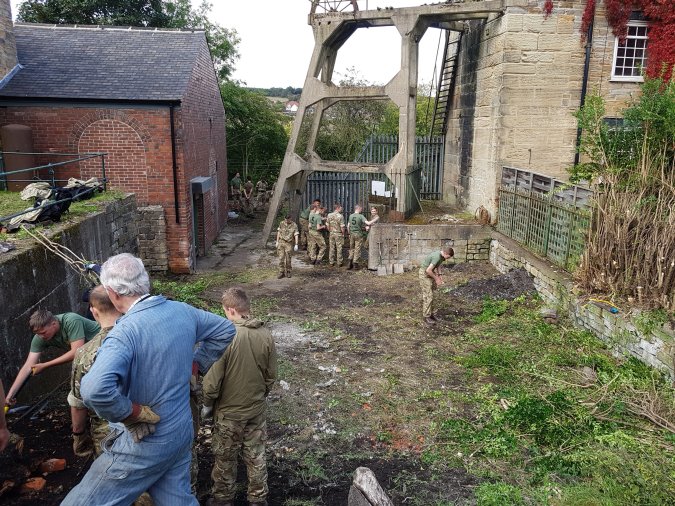 Whilst the remaining stumps on the ramp were being worked on, there was also time to take small groups on tours of the site. Sharing some of the history and function of the site as a coal mine – the black stuff so little seen and even less understood in the twenty-first century.

Describing the two main steam engines on site, the daily dangers of mining, and showing the dark depths of the two open shafts was certainly an eye-opener to the visitors in an area which now seems so green and hilly. 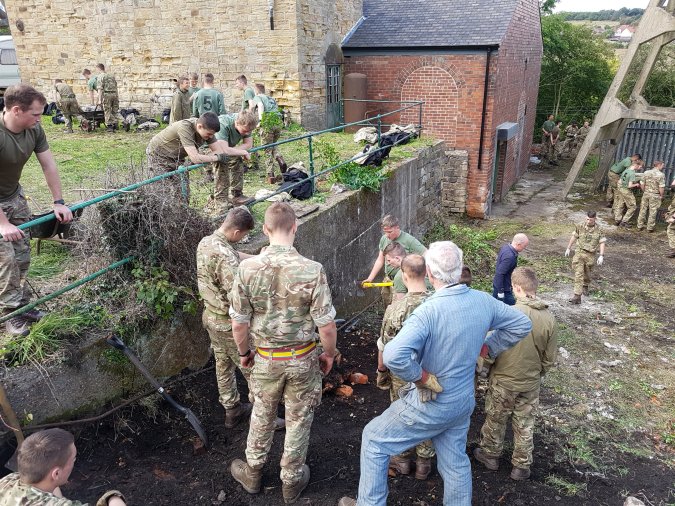 Swinging into action; in the background junior soldiers learn about the pumping shaft

After a hard day’s work, regular volunteer Keith spoke for everyone when he gave a warm thank you to the junior soldiers for all they had done during the day. 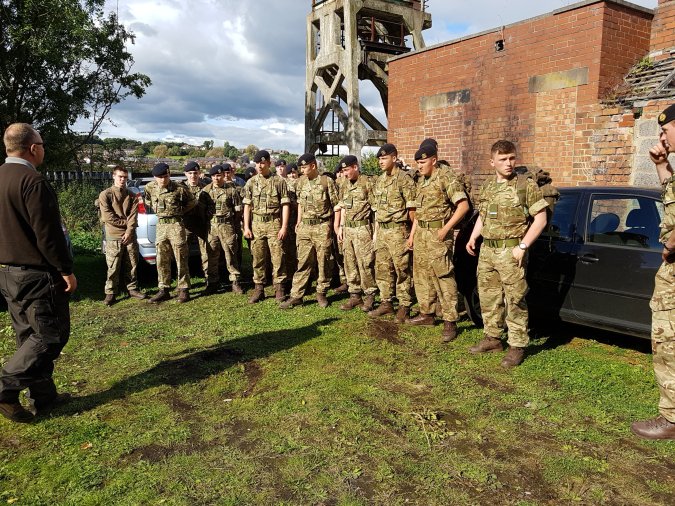 Thanks to Waterloo Company

Sounding the all clear

At the end of the day it was a pleasure to tour the site and see the difference the junior soldiers from the AFC had made; revealing the ramp once more: 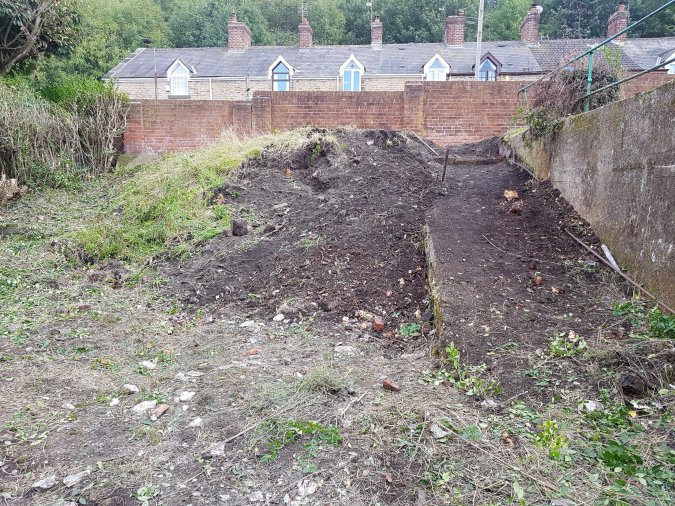 Cleared! Looking great, the ramp is usable once more

…and even tidying up an old wire winding rope which took quite some handling!

Normally the day of rest, Sunday 17th saw the Waterloo company crew back again, with Friends Chairman Steve and regular volunteer Keith guiding the work. Setting to once more, the junior soldiers had at the remaining tree stumps, and gathered materials for another bonfire.

Meanwhile, with some careful steering, the team also relocated the caravan which has been a retreat and comfort on site. Moving the old friend safely to the other side of the yard, the full run of the pit top is opened up once more and the views from around the headgear across the valley can be appreciated once more.

Finally, rounding off the day with some cheeky brick chipping, the junior soldiers paused for a smile!

All-in-all, walking around the site the efforts of Waterloo company in two days have lent the equivalent of many hours of volunteer work to the site, and pushed on some key areas by up to a month’s worth of open day weekends. Our sincere thanks to the Army Foundation College and the best of wishes to the junior soldiers in their future careers! Thank you.