With November fast disappearing it certainly began to feel a lot like Christmas was knocking on the door as the Friends arrived on site to open the gates for another open day and working party. Site Manager Glen welcomed regular volunteers John, Alan, Nigel, Keith, Chris and new recruit Paul to site. Jack Frost more than nibbled on our toes as ice glistened on wall-tops, and ground frost led to some fancy footwork during the morning; all thankfully relieved by bright sunshine in a surprisingly clear and beautifully crisp blue sky.

The pit’s surroundings epitomised Autumn and the turn of seasons into winter. Brown-orange leaves carpeted the ground around rows of bare trees along Wath Road. 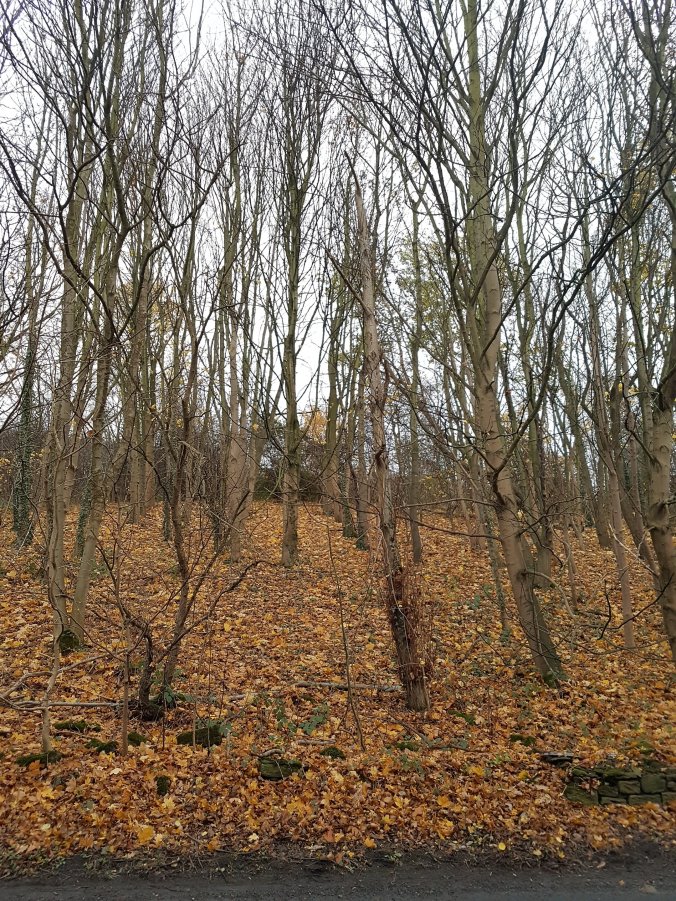 A few reluctant leaves clung on to odd trees here and there, but winter has mostly arrived, and the approach to the colliery site is now framed by an attractive corridor of bared trees skirted by fallen leaves.

The approach to the colliery

Down at the pit gates, another fall of leaves had arrived, and called for attention during the day.

Leaf fall by the pit gates

Ever-proud to keep the pit tidy inside and out, the friends swept up the pavement by the entrance and stacked the compost, prepared for winter.

On site, one blessing of the change of seasons is the revelation of elements of the landscape usually hidden by the dense foliage: down by the canal side the towpath and basin can be glimpsed once more. The TransPennine Trail is revealed, and with it the connection between colliery, railway and canal can be seen once more.

Thinning trees and shrubbery reveal glimpses of the canal-side and basin, with Hemingfield village beyond

With the season making its mark on the landscape, it was time for the Friends and volunteers to follow suit. The last stand of the hawthorn stump was nigh; all hands set to, seeking to clear the main area once and for all. Clinging on from our last open day, the stump had been loosened, but not removed; with straps and winch to hand, the volunteers applied some force and the stump was gone. 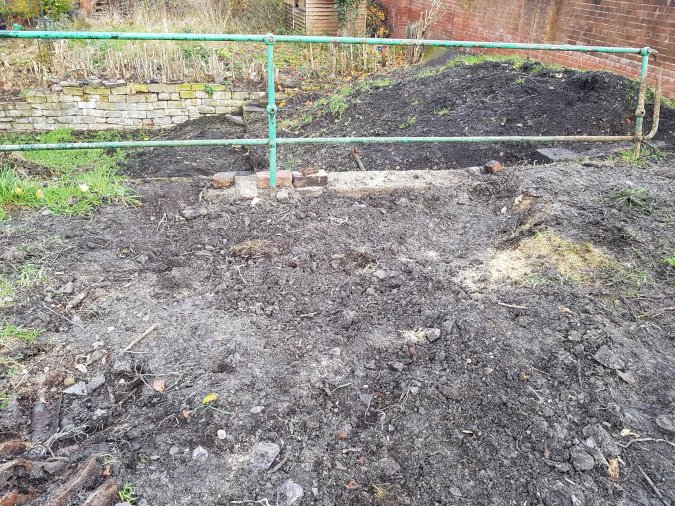 ‘awthorn was ‘ere: first job of the day was the unearthing of the hawthorn stump

And then there was one.

The trouble with winching stumps is that you always need another anchor point from which to pull. As the site has been progressively cleared, there are ever fewer anchor points, and so ever-increasing ingenuity is required. The final challenge was a rather large stump on the top level. The volunteers chopped and dug out the not insubstantial roots, prior to having another go at winching, of course.

Glen, Keith, John and Paul got stuck in during the morning, and by noon things were moving forward (and back). The beast was moving. Finally, after several attempts, the whole thing was pulled free of its roots and the ground was no longer hampered by the tree. Of course the stump itself is quite a hunk of timber, and will take a few more tries to break it down to a manageable and/or a moveable size.

Elsewhere on site, volunteers Alan and Nigel descended behind the winding engine house and continued to work on tidying up the archaeology there. Originally expecting just to neaten up the edge of the pit, showing a tidy edge to the section, prior to moving on to investigate the old boilerhouses, what actually happened was quite a turn up for the books – the history books at least – and caused much excitement on site as news of the emerging finds spread among the other Friends and volunteers.

Scraping away in the pit, Nigel had hit something metal. With Alan clearing away the spoil, the edge of a wheel emerged – seemingly fixed into the ground. Moving the loose infill, and lifting away a whole series of large stones possibly dumped there from a period of demolition, slowly revealed that the wheel was connected to an axle.

To see and understand more, the pit needed to be widened. Bit by bit the axle was revealed, followed by another wheel in the ground. Both ends seemingly pinned upside down, anchored by metal pins. After some careful teasing, Alan and Nigel succeeded in lifting the whole axle with two wheels.

Although the Friends have previously unearthered a single wheel of similar construction, this is the first time that something so dramatically complete has been discovered on site, and something so evocative of the coal working period before 1920, since the wheels appear to be from a coal tub, or corve.

Smooth running: volunteers Alan and Nigel look at the fantastic axle and wheels which had just been lifted

With such an exciting find, the mood on site changed, and the volunteers continued to dig to see if there were any other relics of the past. In the rubble some metal pipework elements emerged.

Pipework, and some more ironwork, possibly associated with the coal tub axle

After pausing for lunch and some catch-ups amongst the volunteers, the team got back to work. 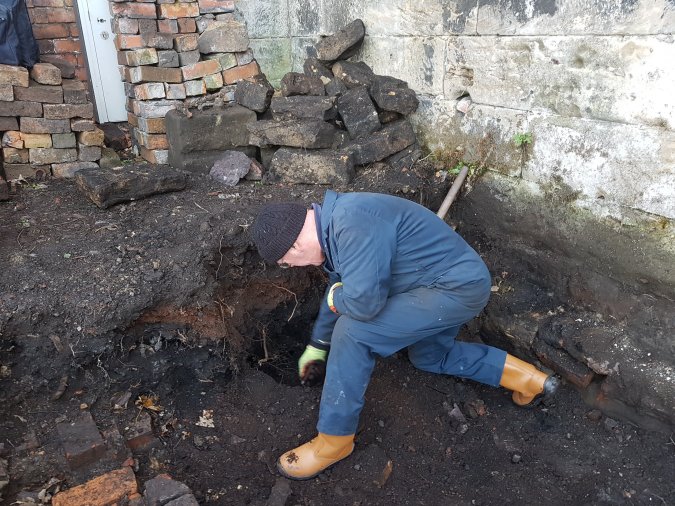 It wasn’t long before some further trowel work caused another wheel to emerge from the muck. Again the call went up, and the other volunteers came over to admire the view from the pit top, looking down over the lower terrace at the back of the winding engine house. 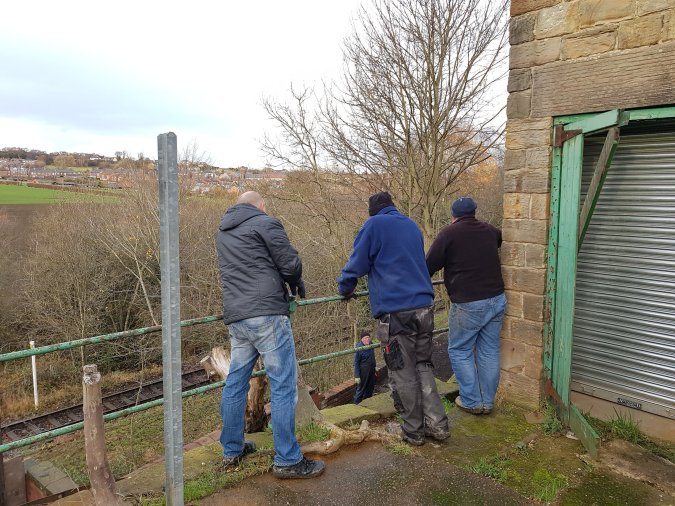 Three is never a crowd. Volunteers share in the excitement and intrigue in the finds

View from the top level: 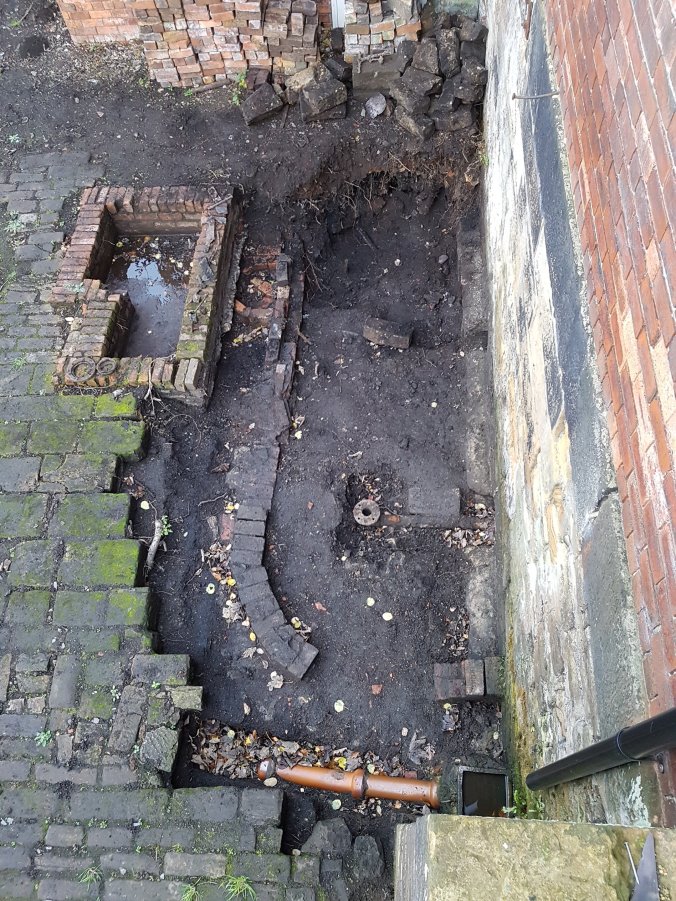 View of the excavation area – with the newest edge at the top of the screen, from where this weekend’s discoveries emerged

A second axle! Again, apparently upside down, the second wheel-set on an axle suggested an old coal tub had been tipped over into the ground, where it had rotted away, leaving only the main metalwork.

After carrying the axles to safety, the volunteers began to wind down for the day – but there was one last note of excitement – something else in the ground – possibly a rail? 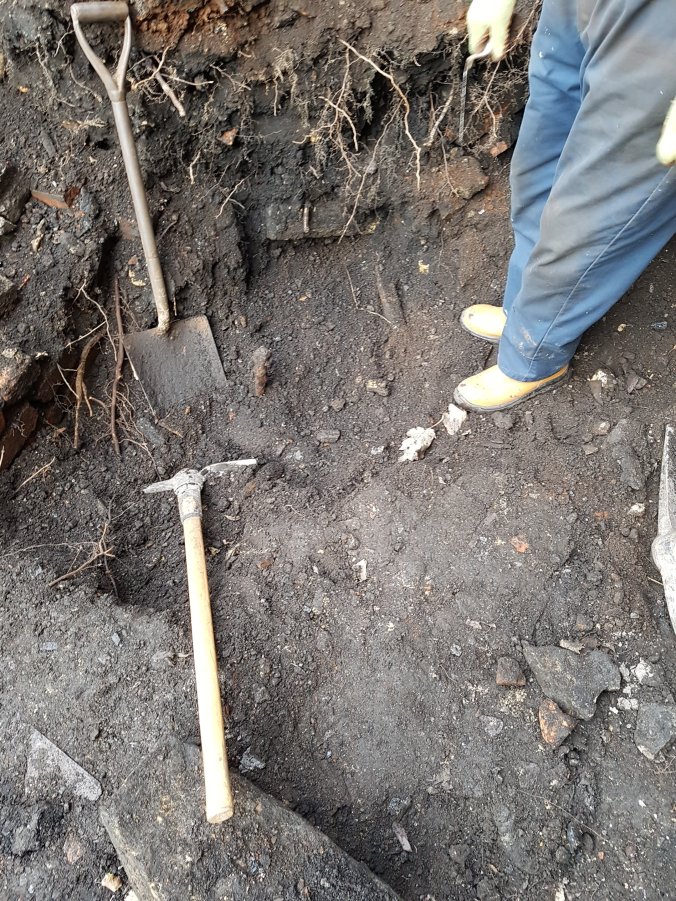 View of further discoveries to be made, including a rail?

Who knows, but having 2 axles from a coal tub was quite enough for one day, thank you very much!

Close ups of the metal axles with wheels – they appear to be from the same original tub. 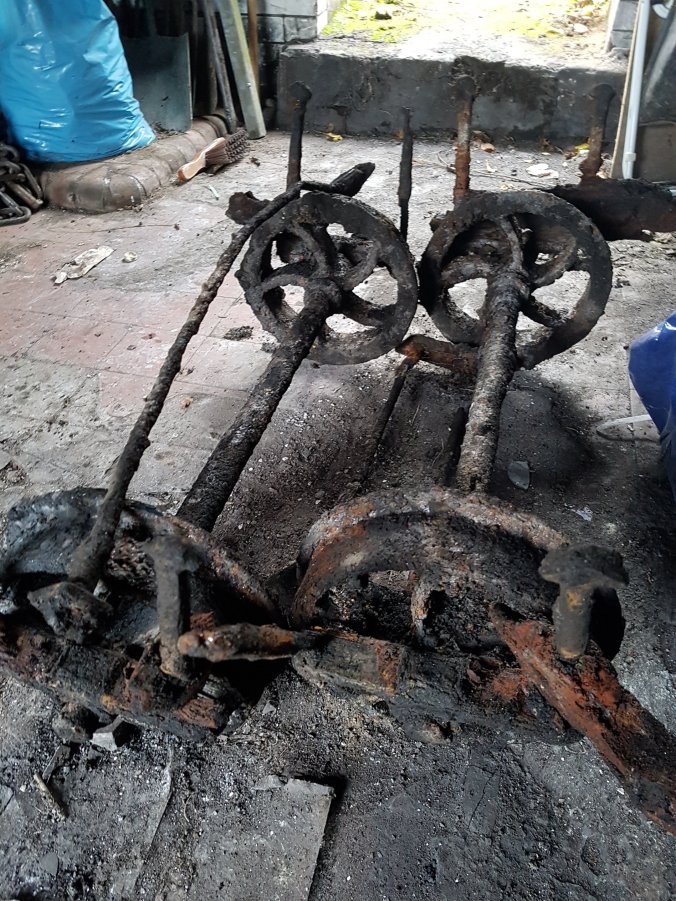 close-up of the axels and wheels; note the rotten wood remnants on the outside of the wheel itself.

reverse angle of the axles

Putting these wheel sets into context, it may help to look at some written sources and images of how pit tubs were made and how they changed over time.

Tubs, whether wooden at first, with iron strapwork, or made entirely of iron or steel later, were an indispensible tool in the working of coal in a colliery or indeed almost any mineral in any mine in the UK. They contained the mineral being extracted, transported it along rails, using flanged wheels to guide the tubs.

Often trammed or pushed by hand from the working coalface to a more permanent haulage road underground, a set of tubs would be hauled by a pony, usually led by young boys of 14, the youngest workers in the pit. Later underground rope haulage did much to ease the pony’s lot, with tubs arriving at the pit bottom, where they were loaded into the winding cage and lifted up to the surface in order to be screened, weighed and counted to the credit of the colliers who had won the coal. The different qualities of coal were then sent over to the basin gantry, to be dropped into canal barges, or simply tipped into railway wagons for onward transportation, whether to local industrial consumers, the ironworks, or to the coast, or down the mainline to the eager coal factors in London.

Several lists of workers employed at Hemingfield show many ‘horse boys’ were tasked with tramming, and hauling tubs, tending to the pit ponies before progressing on to other jobs in the pit. An early inventory of the pit lists 319 coal corves present in and around the pit in 1857, together with 12 horses and 1 ass (Newman and Bond Collection, Barnsley Archives, NBC 553/27). At Hemingfield and Simon Wood collieries the usual weight of coal corves when empty was over 3 hundredweight (cwt). The unladen weight, or ‘tare’ weight could be used to measure the weight of the coal by passing a corve over a weighing machine and deducting the tare weight from the full weight.

A photo postcard from a pit in the Clay Cross Collieries c.1910, showing a pit tub, tram or corve at the pit bottom, the winding cage can be seen, as too can a haulage pony and a couple of the youngest workers.

Although individual collieries had their own methods of tub construction, there are several elements common to all of them, so we can briefly look at some examples from around the UK.

From these images and diagrams we can begin to understand how iron wheels and axles had timber fixed to them at the hub level, on top of which sat the box, or ‘tub’ holding the coal which was won.

Notable in the example we have excavated is the way there appear to be metal pins to hold timbers on the outside of the wheels themselves.

Tubs in context, or corves at large – a pony driver tramming a train of tubs underground, seen here in a postcard from a Cumberland pit, early twentieth century.

Pony haulage with a row of full tubs, similar in scale to the likely original tub unearthed at Hemingfield

Over time the wooden corve with iron strappings tended to give way to other constructions. By measuring the distance between the flanges on the wheels we have, we will be able to say much more about the gauge of the railway, and it may possibly help us to date it more accurately. Meanwhile, to understand the range of tubs used at collieries in the late nineteenth and early twentieth centuries, see the examples below. 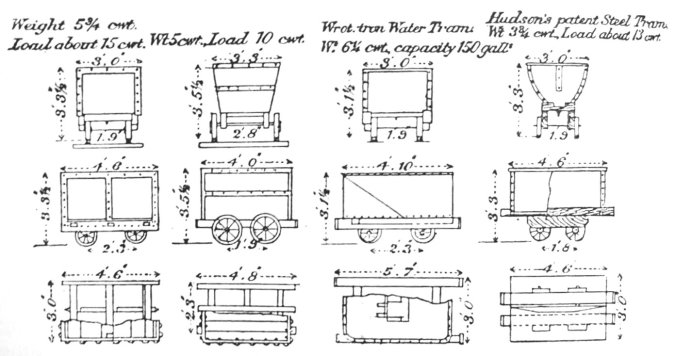 After 1910, the newest tubs tended to be metal as it was more hard-wearing than the wooden equivalents. Due to its closure date in 1920, Hemingfield may not have adopted anything other than wooden tubs. 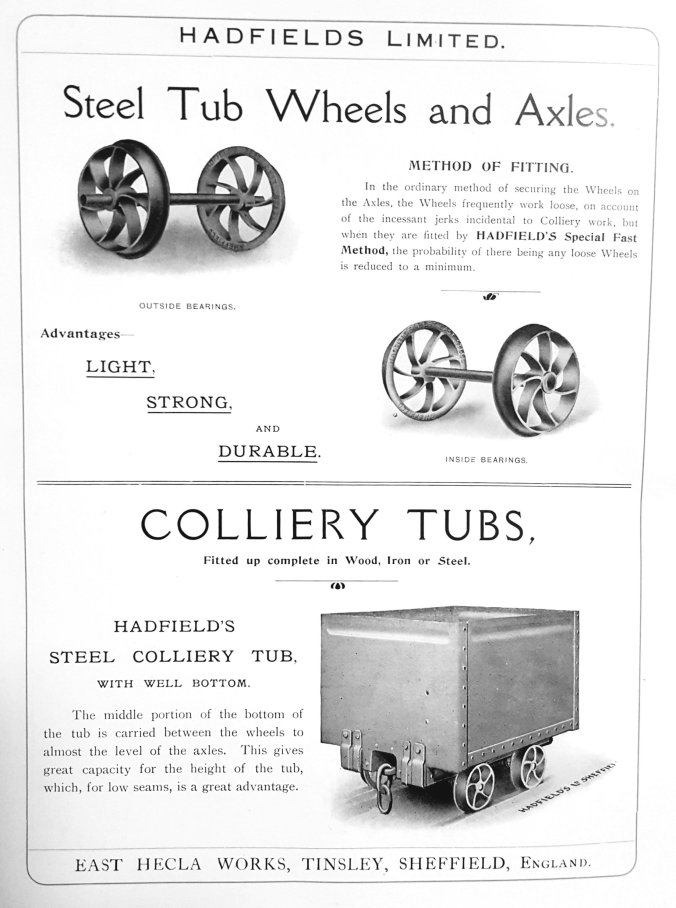 After an exciting day, and with some new theories and questions in mind (measuring and recording is to follow), we wanted to share with you these initial glimpses of the excavated axles. A powerful connection to the coal-winning period at Hemingfield from a century and more ago.