The Friends of Hemingfield Colliery were keen to return to site this Saturday – to open the gates, collect tools, and return to the dig at the rear of the winding engine house.

Friends Chair Steve welcomed regular volunteers John, Keith and Paul, followed by Chris. The crew returned to the scene of the earlier discovery of the coal tub, and picked up where they left off, removing the spoil in what is quickly becoming a fascinating area of hidden features.

The Hemingfield crew split into two digging teams, to cover more ground and hopefully be able to positively record the main features on the lower level. Barrowing duties for spoil and rubble were taken on rotation.

A new target of attention was to explore the route of a pipe emerging from the wall of the brick-built extension of the winding engine house. Steve and Keith targeted this area, carefully revealing the drop of the pipe, whilst ensuring that the surrounding soil was removed to create a clean edge.

Meanwhile, a significant volume of spoil remained to be removed from the section alongside the stone winding engine house, the area edged in by a thin brick wall which curves back towards the stone wall, and is cut across by a later drainage pie. This is the area from where the coal tub emerged, and appears to contain a mixture of dumped rubble, bricks, stone, timber and iron.

This area is certainly giving up its fair share of ironwork, broken pieces, iron pins, straps an rusted relics of…we know not what.

The odds and ends of iron emerging from the dig – with a modern metal cup, for scale…or just for a break.

Much of the day was taken up in shoveling a large amount of earth from a 2-3 metre length of pit. The nearer the excavation drew to an iron pipe projecting from the stone foundations of the winding engine wall, the more substantial the stonework which was emerging in the spoil; lose and apparently discarded, the pieces shows signs of having been part of external masonry – with the same distinctive horizontal tooling which is a feature of the colliery and domestic buildings on the Fitzwilliam Estates.

Amongst the stones, at least one had another purpose – possibly a counterweight of some sort? a cover? A squared-off stone with an iron ring and ‘s’ hook. IT was certainly heavy enough to remove.

No ordinary flagstone. A square stone with a central iron ring.

A half-ring marked the centre, set into the stone. The ring’s central upper arch was heavily worn, and appeared to be the part into which an iron hook was connected. The iron hook was however very light for the work of holding the stone and the thickness of the half-ring. Its purpose? suggestions welcome!

Back at the pipe, after carefully removing the surface earth, the dropping pipe was revealed as connecting into a horizontal pipe (now broken and discontinued). The age and function of this pipe are currently unclear, though the heavier horizontal pipe triggered discussions around combustion silencing amongst other things. Intriguingly, the horizontal pipe appeared to be protected by its own brick enclosure

Pipe emerges from brick extension of winding engine house, and descends into wider horizontal pipe (now broken off). The traces of a brick enclosure to the pipework emerge.

After much trowel-work, earth shifting with shovels and buckets, followed by some careful brushing, the extent of the pipe was beginning to be revealed.

A broken connection in line with the secondary pipe could be seen, together with the end-flange of the horizontal pipe. The brick enclosing wall is quite substantial. 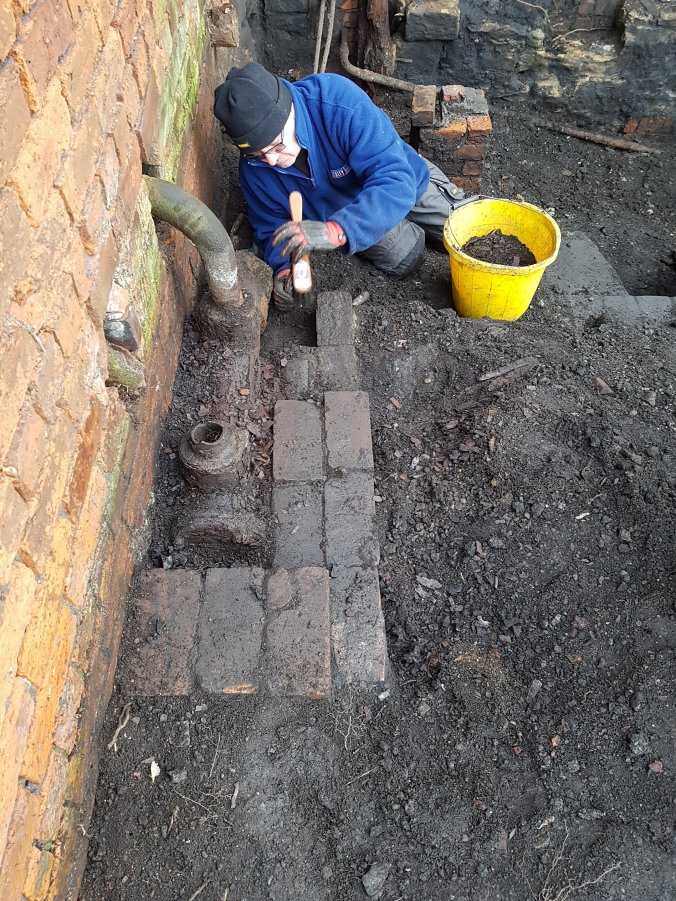 Top-down view of the pipe excavation

As the day progressed, the layers of spoil at the far end of the dig became increasingly mixed with pieces of coal, small at first, and then increasingly large. Too large to be mere boiler coal material, which would usually be unsaleable smalls, instead the pieces emerging were relatively large – compared to anything we have previously discovered on site. 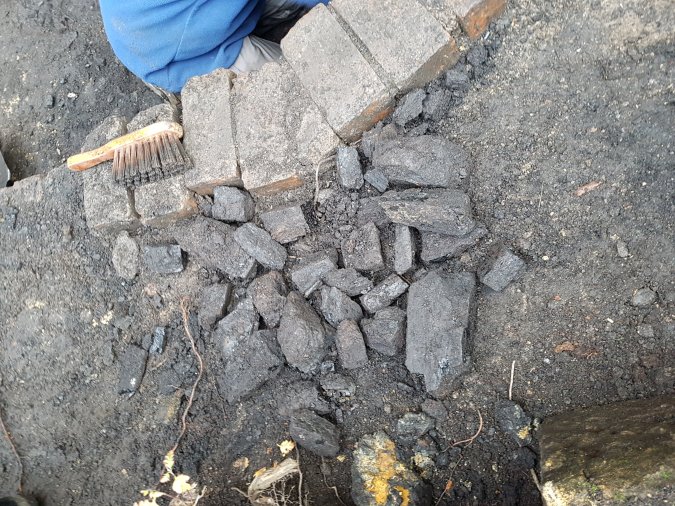 Coal picking – from the spoil infill

It may sound ridiculous, but there was considerable excitement in finding discarded coal at a former colliery – but compared to the millions of tons of coal which had been removed from this pit from 1848-1920, the sight of nice piece of ‘the black stuff’ is quite a rarity now. One piece in particular gleamed in the cold light of the February skies. Large pieces would have been the norm in the Barnsley seam. A single coal tub being filled with such pieces of the better qualities of gas, steam and house coal.

As the day wore on, the barrowers’ lot became somewhat more challenging: large hunks of stonework, extensive brick rubble and copious amounts of spoil, earth and muck which were ramping up to a mini-mound – our own mini-muckstack. 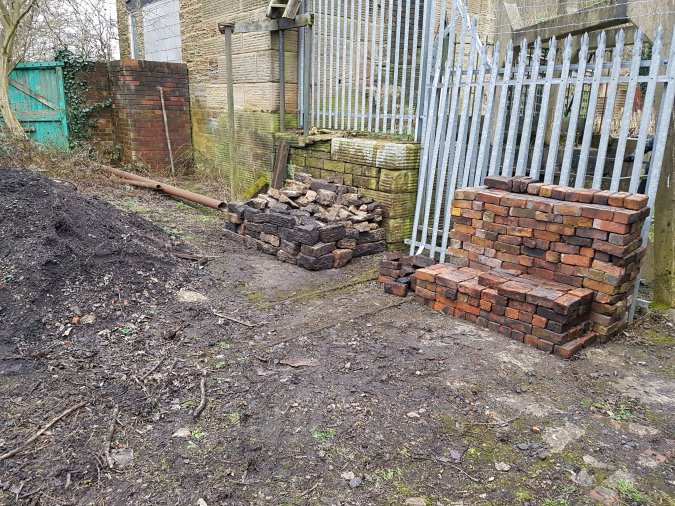 Stones and bricks recovered from the dig 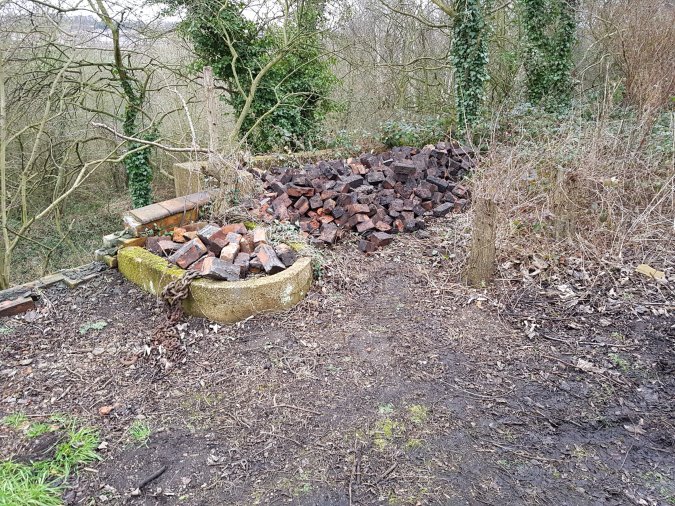 The Friends were pleased to welcome a visitor to site – a traveller from West Yorkshire with local family connections at Tingle Bridge. Friends Chair Steve provided a tour and overview of the work on site, as well as taking some details to follow up the family and local history connections to Hemingfield – key research themes for FoHC. The visit also sounded the dinner hour – and a pause from the digging and shifting.

After lunch, the work resumed, and now the progress was rapid as the pipe-crew moved over to the main section. The level of the excavation now had made wheelbarrow access a little challenging, so a wooden plank was called into service as a delivery ramp to keep things ticking along, as the industrial archaeology approached the iron pipe. 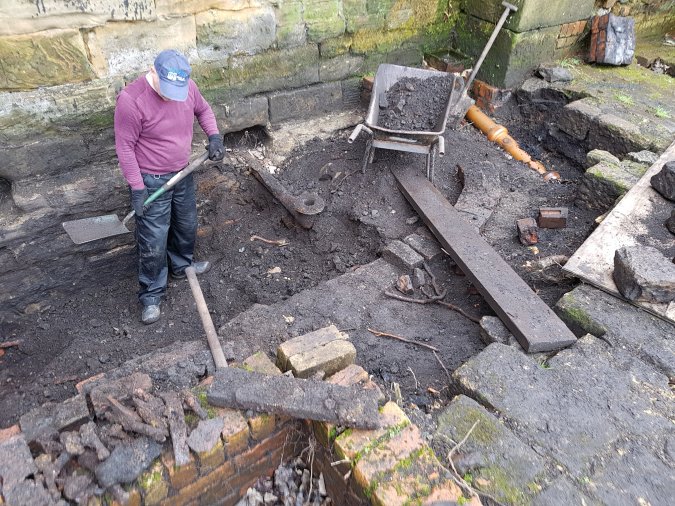 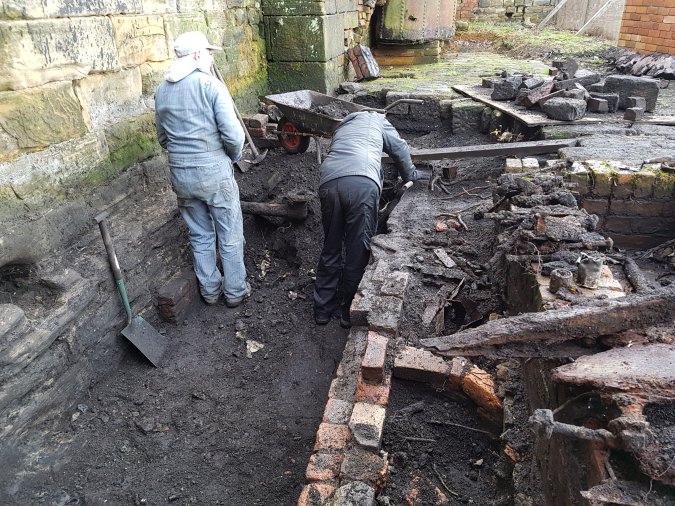 Depth of perception: the excavation is about 4 feet from the ‘surface’ of the lower level 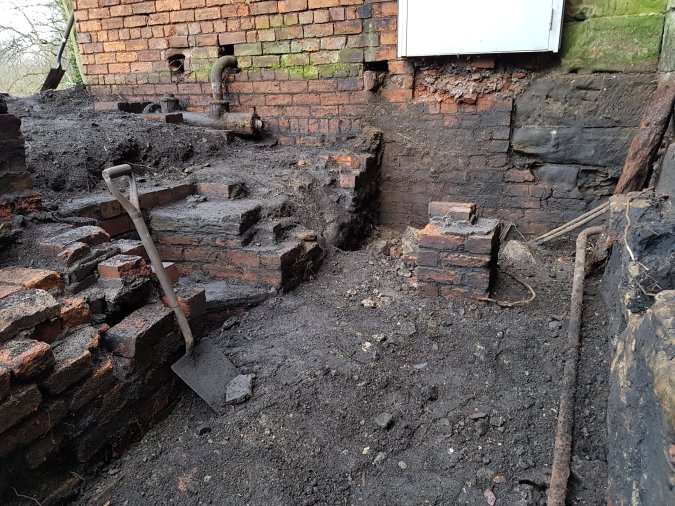 Reverse angle – looking back down the excavated area, a substantial brick wall and small pillar can be seen at the edge

The excavated infill reveals the extent of the brick wall enclosure

All hands on deck/in the dig, finishing up the excavated lower area. This part was rich in pieces of coal

At the close of play on Saturday, as the length of the excavated area was being cleaned up, it gave the appearance of almost being a small ‘room’, an area enclosed by a brick wall, with some stones in the lower levels of the brickwork. One nice feature was what appears to be two stone steps, with somewhat large riser gaps it must be said, but steps nonetheless, stone treads in the brickwork, and the upper step and stone slightly curved.

Further exploring this feature and understanding its form and function will be very interesting in interpreting the development of the uses of the lower level. Referring to a demolition photograph from 1921, it is still unclear what this could actually be, though there did previously appear to be boilers or machinery on this level. 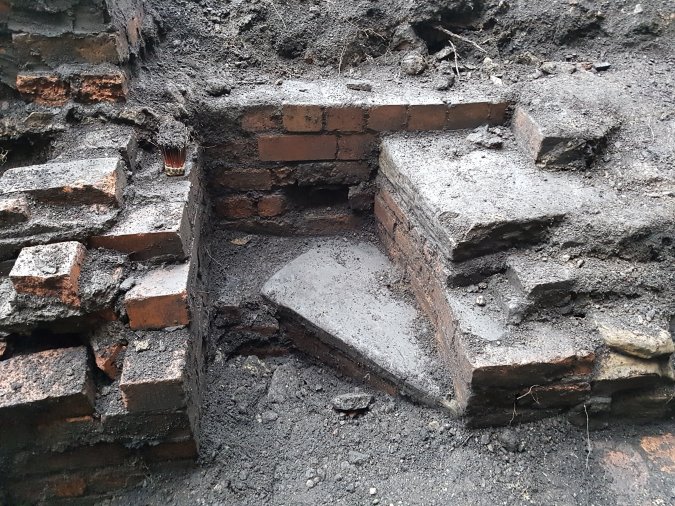 As the Friends and volunteers packed up from the toils of the day, one further find, typical of Victorian and Edwardian rubbish dumps emerged – a broken glass bottle, but here one with some intriguing lettering and an image raised in the glass.

A little bit of cleaning showed the word – Wath – of Wath upon Dearne, just down the road (Wath Road, no less). Elsecar is fortunate to be the home of BBR auctions, started and run by Mr Alan Blakeman, it is a world-renowned contact point for glass and stoneware bottle collectors. Some delving later, a complete unbroken version of the above was located and reveals a delightful story of local brewers Whitworth, Son and Nephew Limited, Wath. Dating from the 1880s, the brewers under Spedding Whitworth purchased local rivals and were registered with the above name in 1891, giving us a start date from when the bottle could have been in circulation. The company in name was wound up in the 1930s, but continued in business until bought out by John Smiths in 1958. Spedding Whitworth was an extremely prominent man in Wath, and at his death in 1899 the townsfolk contributed to a public water fountain which, though no longer producing water, nevertheless can still be seen in Wath. The site of the brewery is now occupied by Tesco.