Not-entirely-bright blue skies welcomed the Friends back to site in March. A little before the Ides, perhaps, but nonetheless another good day to crack on with work on site.

Friends Director and Site Manager Glen opened up the gates with regular volunteers Paul, John, Chris, and Keith joining in as work continued around the rear of the site on the retaining wall of the lower terrace. To release the pressure, and allow safer access to partial collapses in the lower face of the retaining wall, the damaged brick wall at the top has been carefully removed (saving collapse effectively) and an area behind it lowered so the extent of the collapsed can be assessed, and, after survey, repaired. This is a big job, and the Friends will need help to repair the wall, but as with all of the projects the Friends of taken on, they are determined to take things steadily and have learned the value of patience.

Looking out from the main headgear, huge clouds hung over the still-bare but budding trees, and the green farmed fields between the pit and the back of Hemingfield village on top of the hill. The scene is green and quietened;

quite a contrast to past visions of the pit – the many pits at work roundabout Elsecar and Hemingfeld a hundred years ago and more, with winding wheels and headgear dotting the then bare landscape, crisscrossed with railway lines. 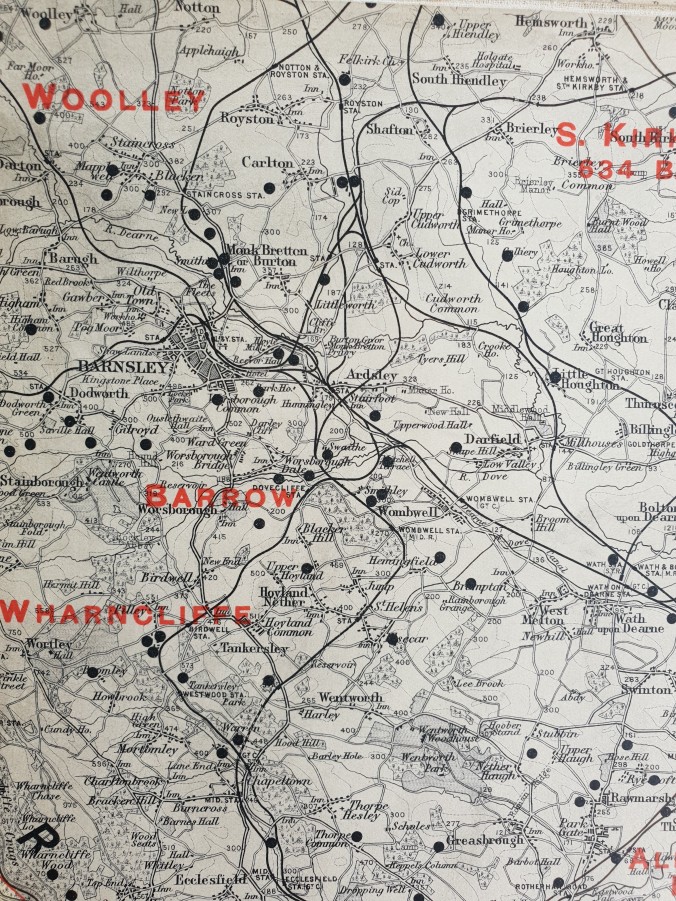 Happily, Elsecar still retains railways – both the Midland 1897 line to Elsecar station, and just below our site, the original mineral line was restored and is run by our friends at Elsecar Heritage Railway.

Now, in South Yorkshire, Hemingfield Colliery – once also known as Low Elsecar Colliery to differentiate it from the others in Earl Fitzwilliam’s control –  stands very much alone. Uniquely retaining its two original shafts – one for winding, one for pumping, and two headgears, concrete built to replace the wooden ones which were removed in the 1930s.

It also boasts truly remarkable surviving 1840 Winding engine house, and, next door to the Friends’ site, can be seen the Pumping Engine House.

Pride in our work

These wonderful heritage structures and remains, and the stories of hundreds of people, and really thousands of local people who worked in and around the pits, are what encourage and inspire the Friends, volunteers and supporters every Open Day to continue the long road to conserving the site, repairing the decay and investigating the stories to prevent them becoming forgotten mysteries.

There’s more where these came from!

With that in mind, it was back to working hard – reclaiming bricks, and trying to prevent further collapse in the rear retaining wall. Heavily rebuilt and repaired in the past, the lower wall stone masonry wall was later buttressed and in some parts replaced with a huge poured concrete retaining bastion, built in shuttered stages. In between the reinforcements, there are weaker areas where sandstone erosion and facing stones have fallen, allowing rubble-fill behind to collapse. A brick wall along the top of these sections was left ‘free-floating’ by elements of this collapse, so the Friends have been carefully trying to get back to the retaining wall level to address the collapses and make repairs.

This work continues and will continue well into 2019 and beyond. Nevertheless the teamwork among the volunteers has been very strong, so rapid progress on removing unsupported walling has been made, and clearance along the base of the wall will allow a thorough inspection and investigation into the longer term repair of the decay.

It was a long day, with the odd drop of the wet stuff, but further progress has been made and so the Friends looked forward to the next Open Day to take the next step.