Cloudy with a chance of sunshine?

It was with a mixed bag of rain and whispers of summertime sunshine that the Friends arrived for a slightly delayed start to another busy Open Day at Hemingfield.

Site manager Glen opened up and had a warm welcome for returning volunteers Chris and Mike – it was a lovely day to catch up and reflect on activities on and off-site as well as get ‘back to basics’ with a solid round of tidying up, sweeping, strimming, sweeping and general positive maintenance.

Starting outside the site itself, on the pavement, a swift recce to tidy up and tool up to clean the street at the entrance to the site, by the number 72 bus stop.

Mixed bag: a ‘before’ pic of the Wath Road boundary wall. Sadly rather deminished by criminal damage – but very much on the list to be restored!

With some simply delightful synchronised sweeping and weeding the crew cleaned up outside the gates and lo it was tidied.

Not too shabby. Looking better.

Back in the yard. The Friends were delighted to be able to deploy a new investment – a new improved strimmer, funded by the funds awarded by Tesco’s Bags for Life scheme, in which the Friends of Hemingfield Colliery came 2nd after being in local stores from March and April. We were delighted to receive such wonderful support from the Barnsley community, and the funds are going to providing improved tools to ensure the regular maintenance of the site. This piece of kit will mean a sharper looking pityard and a workload which will more easily be shared amongst the volunteers which is really helping the Friends ensure regular maintenance.

It was quickly put to its paces, quickly re-covering the ground previously strimmed in two previous working parties, and taking on the heavy thickets of grass, weeds and shoots. Looking good.

Getting stuck in, strimmer patrol time

Revenge of the scyth(e): making headway.

As the weeding, digging, strimming and rubbish collection continued (we get unsolicited donations of stuff flung over the wall from time-to-time, lucky us), the sun snook out from behind the earlier heavy clouds and pretty soon we were all getting tanned in the midday sun. The Headgear looked resplendent as some rooting and stumping got underway to clear the main pityard grassed area.

After a tussle with the undergrowth the main yard was clear, and looking prtty good even if we do say so ourselves! The heat was somewhat higher than the 20C suggested, and the grass looked more like hay in some places.

In a good way, the time saved by covering more ground the new strimmer meant that, even starting a little later, we were able to get further around the site in a single go.

Thistles, grasses, weeds and rubbish be gone! Reaching for the aftersun, the Friends left side pleased with progress and happy to say we can take pride in the appearance of the main areas of the site, something which will allow us to stay on top of site maintenance and also allow us to plan activities later in the summer…more of which anon!

All paths lead to…

Given the (generally) nicer weather, one of the volunteers erm, volunteered to share a little more of the beauty of the approach to Hemingfield from Elsecar. Starting at the basin head at Elsecar, a peacful spot, slightly hiddden from the Heritage Centre, this is an oasis of calm.

Glancing down the Elsecar branch of the Dearne and Dove canal, the spire of Elsecar Church can be seen – a beautiful building contemporary to the opening of Hemingfield Colliery, 1842-3, reflecting the growth of the village of Elsecar and the increased accommodation for the local congregations (who were also accommodated an several non-conformist chapels). Earl Fitzwilliam gave generously to the new church – the land, vicarage and fabric of the building which is a delight to visit.

Also, coming strikingly into view can be seen two swans, their graceful necks extended by reflections in the water, as they glide to the side of the canal wharf and a bit of a snack from a regular Elsecar wildlife lover.

Adding to the beauty of this tranquil morning scene, and no less graceful in its progress along the waterside was the steady sound of Elsecar Heritage Railway’s steam loco as it made its way down the track to the depot – shuttling one of many exciting footplate experience trips for visiting firemen-drivers making the most of a fabulous setting, and turning the heads of many a passer-by walking down the TransPennine Trail.

Speaking of which, the walk from Elsecar to Hemingfield pit passes the sign telling the tale of the route…

A quick glance back down the path to Elsecar before crossing the road at Cobcar bridge and continuing on down towards Tingle Bridge.

Heading down the towpath, with the little loco steaming ahead, the walker soon approaches the hidden glory of the Hemingfield Colliery basin.

Although somewhat clogged and neglected, the morning light is still reflected as the side wing of the basin is still partly in water, though many trees are now growing out of the side of the basin itself.

The treeline and towpath enclose what once would have been quite a high and open working area, with a high gantry over the basin and a small engine letting coal trucks (corves) down from the pit head, over the mineral railway line and through a shoot into the waiting barges which would load up and take coal out to the Humber via the Dearne and Dove, and BArnsley canals.

Pausing by the new interpretation board, passers by can get a glimpse of the main headgear at the pit and learn more about the history of the site and the Friends of Hemingfield Colliery.

Just down the road (Wath Road, obviously) in Wath, we were delighted to hear that Wath Hall Preservation Society Limited had managed to raise the necessary matched funding to buy Wath Hall, Grade 2 listed former manor house which had been vacated by Rotherham Metropolitan Borough Council.

Fantastic News!!!!!!!!!!!!!
We got there: Bank balance tonight is £92,450.
A huge thank you to all shareholders and to everyone who has shared the message and supported us on our journey so far.
We have put our formal bid into Rotherham Council who will make the decision whether to sell it to us in the next two weeks – so if you see a local councillor please just ask them to support our bid.
Everything we raise will be matched with an equal grant so it is still helpful if you haven’t yet bought shares for you to buy them this weekend. Not only are you helping us to renovate the hall but you get a say and a vote on the future plans
Thanks again to everyone who has bought shares and looking forward to a bright community led future for Wath Hall

WHPS was formed as a Community Benefit Society to enable it to raise the funds by issuing community shares as part of a careful business plan to acquire, repair and ensure sustainable operation of the Hall for the benefit of the community and to be able to save towards a future second phase of restoration.

Get involved in the Elsecar Newcomen Engine boiler house dig!

The teams from the Elsecar Heritage Action Zone and Great Place Wentworth & Elsecar have announced an exciting fortnight of activities during the Festival of British Archaeology 2019. They will be excavating a couple of trenches at he newcomen engine boiler house as part of a community archaeology dig over two weeks and are inviting the whole community to get involved.

Running from Monday 15th-Friday 26th, 10am until 4pm (Mon-Sat), come and take part in the fig and learn about the archaeological investigation at Elsecar as well as learning new skills.

Book a place to get hands on: https://www.eventbrite.co.uk/e/newcomen-beam-engine-excavation-tickets-63961280913

There will also be a Newcomen engine tour and demonstration on Sunday July 22nd. 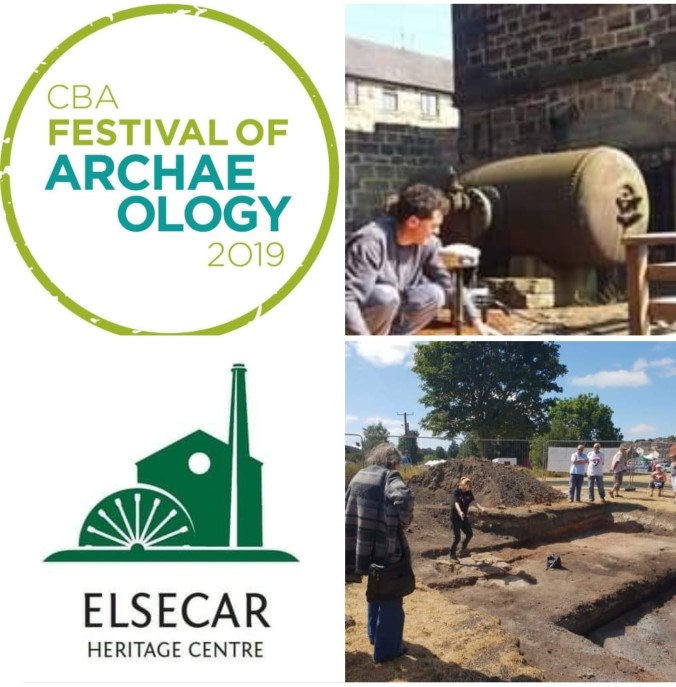 See the full Festival of Archaeology programme of activities 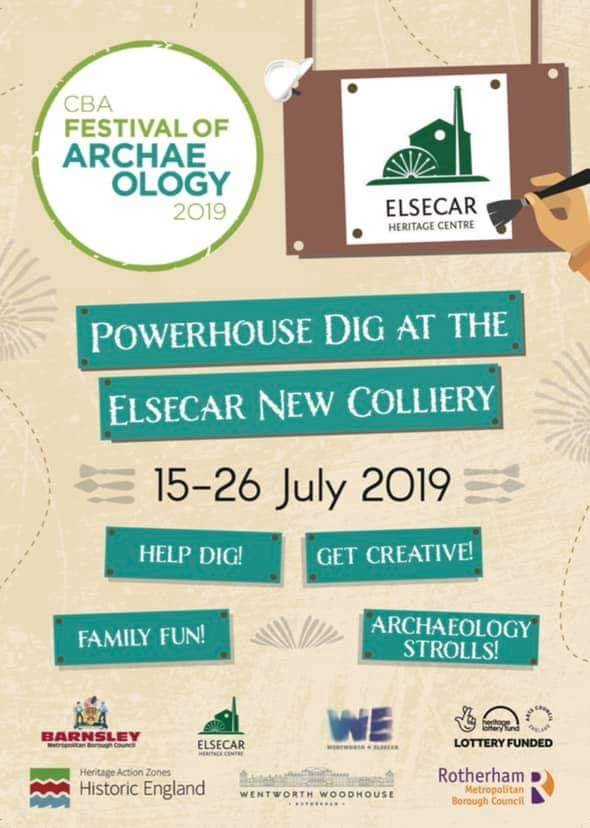 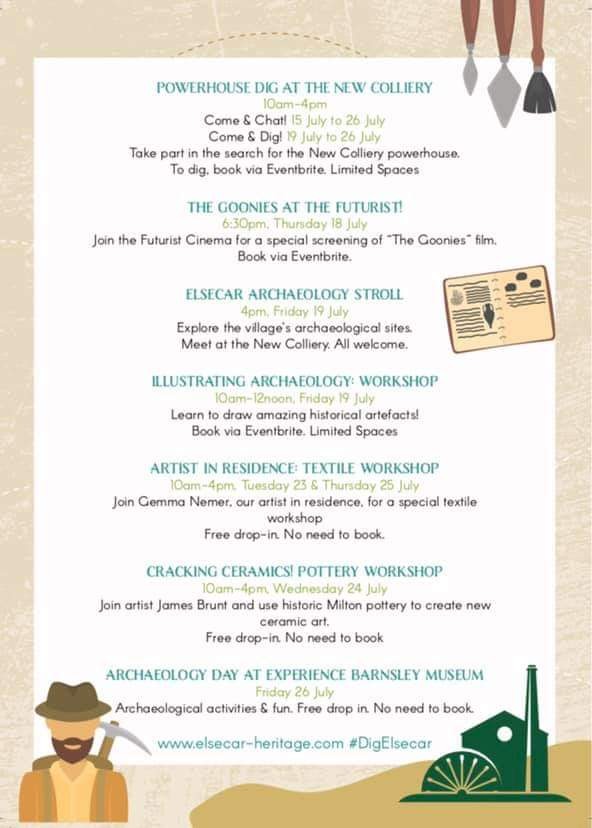 Another local initiative up at Milton forge playing fields, is being arranged by the groundforce of the Mates of Milton. Please do join in with them if you can help: 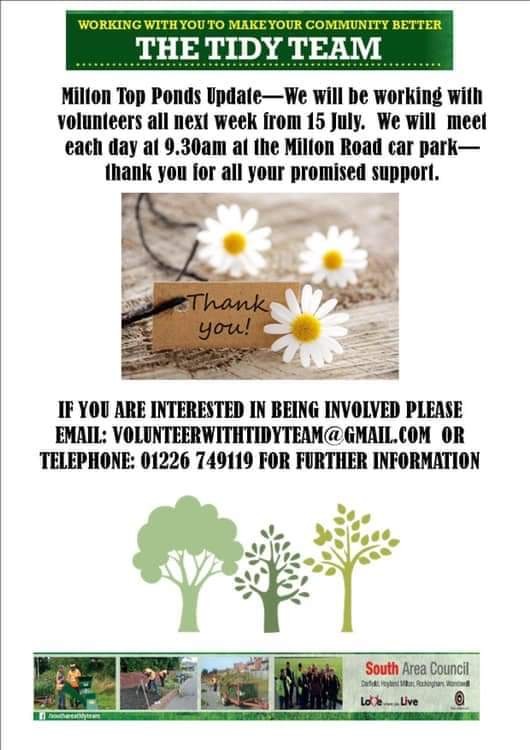 Join us for another thrilling adventure…

The Friends of Hemingfield Colliery’s next Open Day is due for Saturday 20th July 2019. All welcome to visit and see, share your knowledge, or even join in with working party activities on site.