Springtime showers marked the beginning of the first working party in April, but they quickly cleared, and as bluer skies returned the Friends and volunteers got to grips with another weekend of site clearance.

Friends Director and Site Manager Glen once again got stuck in to felling, lopping, chopping and general pruning of unwanted vegetation on the south-west side of the site – an area which it is hoped will provide space for vehicles and hard standing to accommodate volunteers and visitors in future. Ably assisted by Friends Chair Steve, and volunteers John, Nigel, Chris and Frank, the group were certainly never short of work – though you might say they were a little “stumped” from time to time. Clearing tree stumps is no laughing matter, however.

The south-west end of the site is a little bit of a mystery. Away from the shafts and remaining buildings it is marked by a boundary wall which is a mixture of patched brickwork of different makes, from different periods. 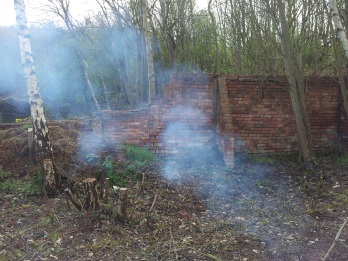 The south-west boundary wall (outside looking in)

Closer to the entrance, behind the metal security fence, lies a large concrete base with embedded iron rings. Previously hidden under a carpet of roots, this base provided a firm foundation and fixing points for the stationing of a mobile winding facility when the site was in use as a pumping station. At this period the site was under the control of the South Yorkshire Mines Drainage Committee, superseded by the the National Coal Board in 1947.

uncovering the old mobile winder base

Clearing the base revealed a large area of hard standing which, together with some levelling and rearrangement of the existing fencing, will enable the Friends to make much better use of the whole site in future.

All of this work shows how space and light are being brought back to the pit yard, but without regular monitoring and intervention, it doesn’t take long for nature to takeover once more; nettles emerge and pioneer species like birch trees appear where previously there was only bare ground. Nowhere is the power of nature and the effect of neglect more evident than in the fate of an old pumping pipe left out many years ago, and now rather neatly entangled in a tree stump.

Anyone unsure of the scale of the task at hand, or of the progress that has been made since the Friends took ownership of the site in June 2014, need only compare an old Google streetview of the site from June 2009:

Uncovering the past, opening up the future

During the day on Saturday there were a number of visitors to the site including a former staff member of the Mines Drainage Unit, who kindly shared information about the site’s function as a pumping station in the 1980s onwards. The Friends are keen to hear from anyone connected with the site – please don’t hesitate to contact Friends Director Christine by using the contact page, or via facebook or twitter .

Another new visitor, passing by from Elsecar Heritage Railway, appeared in the shape of the little green tank engine Birkenhead. Delivered to Elsecar heritage centre train yard earlier in the week, the new engine ran up and down the Coalfield Memorial line during Saturday for testing purposes prior to providing a passenger service, double-headed with the diesel engine Elizabeth. 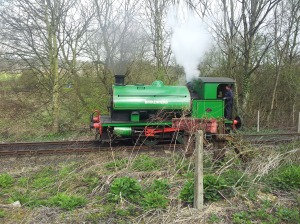 With work at the south west end in hand, the focus shifted to continuing the clearance of the east end of the site, in the shadow of the old pumping pit shaft. Here again Glen and the chainsaw were called in while the volunteers helped to gather firewood and continue the ongoing work of unearthing a seemingly endless stream of bricks buried in a mound of earth and rubble.

On Sunday clearance work continued before rain brought outdoor activities to a close. Glen, Christine were joined by Frank and volunteer Keith in cleaning up the concrete base and tidying the south-west end in general. 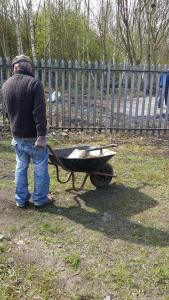 All in all another busy weekend, with yet more of the site now available for future uses for the Friends.