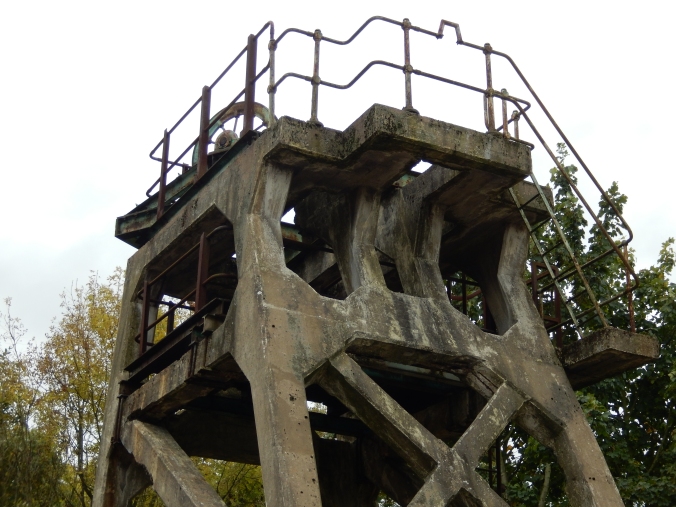 The weekend saw a smaller working party than usual convene at Hemingfield Colliery, as Site Director Glen met with volunteers Nigel and Chris on an overcast Saturday morning. The team itself was far from overcast, however, and a bright and jolly mood pervaded as the work began. 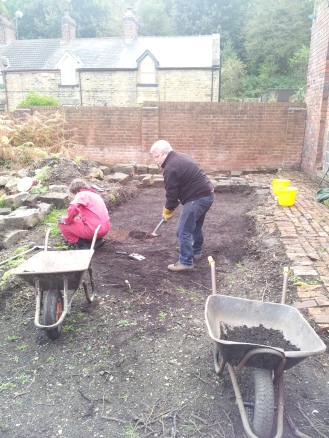 Glen, Chris and Nigel get stuck into careful trowel work

Archaeologist Nigel was keen to prepare the area to the north-east of the switch gear building for an official record photograph. In order to do this, the area had to be scraped clean of loose dirt and weeds, using hand trowels, so that any archaeological features would show up clearly on the photograph. Under Nigel’s direction, Chris and Glen soon proved to be dab hands at skillful trowel work. Using trowels, hand hoes and hand shovels, bought with money from a recently-acquired equipment grant, the team carefully removed the last of the modern overburden to reveal the late phase colliery yard surface.

Work continued until lunchtime, when the team thankfully paused for a well-earned and delicious chippy lunch, thoughtfully provided by Glen. At one point, however, Nigel and Chris had cause to fear for their chips, as a huge flock of crows suddenly and unexpectedly flew out of the woods above Pit Row. The flock swooped around above the site for several minutes, pecking and fighting each other noisily and violently, and causing the kind of commotion that eerily and accurately explains the origin of the collective noun, a ‘murder’ of crows

Back down on earth, Chris spotted a rather more peaceful visitor crawling along stealthily under the headgear. He identified this exotic-looking insect as a hawthorn shield bug, which as its name suggests, lives largely on the fruit of the hawthorn tree (Crataegus monogyna). However, far from heading for the numerous hawthorns on site, this specimen began to take an active interest in Nigel’s flask of tea! As these beetles apparently release unpleasant odours when disturbed (they are also known as stink beetles), the team decided to return to work before any malodorous mishaps occurred.

By late afternoon, the team had finished their task and had exposed the layers of crushed boiler slag, clinker and ash that made up the former yard surface. As the team worked across the site, they had identified a linear feature which cut the yard surface in two. This will need to be archaeologically excavated in due course, but will probably prove to be a service trench relating to the remodelling of the switch gear building in circa 1940.

Finally, after the team had successfully cleaned the entire area, Nigel was able to take a series of record photographs. These were taken from both ends of the site and, in accordance with archaeological practice, each photograph contained reference scales (in this case – two 1 metre scales). These scales help the viewer to determine the size of the feature in the photograph.

Having taken the shots, the next steps are to draw a plan of the yard surface and record it on archaeological recording sheets, after which we will investigate the modern drain. 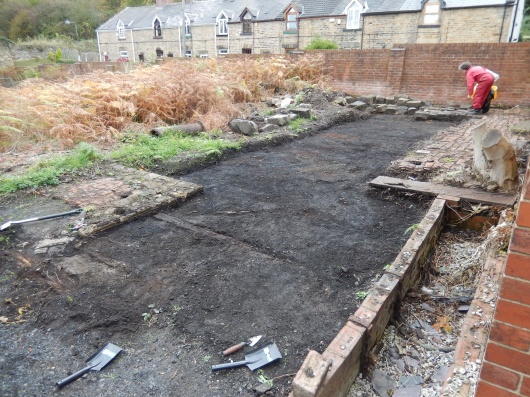 Getting the area ready for the photograph

With the top layers removed, it’s worth remembering how much has changed during the year. Here is the same area back in February:

Now it’s looking neat and clear, and the physical remains are beginning to offer up some clues .

All in all, a good day’s work and a fun and valuable archaeological learning experience was had by all the team!