After a week of miserably wet weather, Saturday arrived with bright sunshine and spookily unseasonal warmth, as Site Director Glen unlocked the pit gates ready for our last Open day in October.  Just after ten o’clock a keen group of volunteers arrived on site ready for what would be a busy day of clearing the west end of the colliery, an area hidden by silver birch trees which sprang up over the last 20 years as the pit site was neglected and became overgrown. We certainly like a challenge!

Letting the light in

In the first year since taking over the site the Friends, volunteers and our supporters have all helped to make huge strides in reclaiming the site from the ravages of theft, vandalism and neglect. One area which has remained largely untouched by the clearance work thus far is the west end of the site, beyond the concrete hardstanding. This area is dominated by Betula pendula or silver birch, which is often described as a pioneer, and even an invasive species, in that it is quick to grow in abandoned or disturbed land.

At Hemingfield they have certainly made their presence felt, and in order to make progress on preserving the site, preventing the collapse of walls and destruction of the remaining industrial archaeology, we needed to clear the ground. To that end, the group of volunteers assembled, John, Alan, Nigel, Chris, Phil, together with a new local volunteer Anthony, ready to cut back the unwanted growth, and to reclaim the site.

A prompt but expert start by Glen was made with a chainsaw,  as Nigel and others prepared a fire to burn the autumn foliage and also to clear down the mound of weeds and undergrowth that has built up from previous clearance work on site.

Volunteers in action: assessing trees for clearance and progress in setting the fire

Sunshine through the trees and rising smoke

As the kindling took light and the first roots and branches began to burn, plumes of smoke rose from the fire, and drifted up into the thinning branches above as dazzling shafts of autumn sunlight shone through; it made for a beautiful setting in which to work. 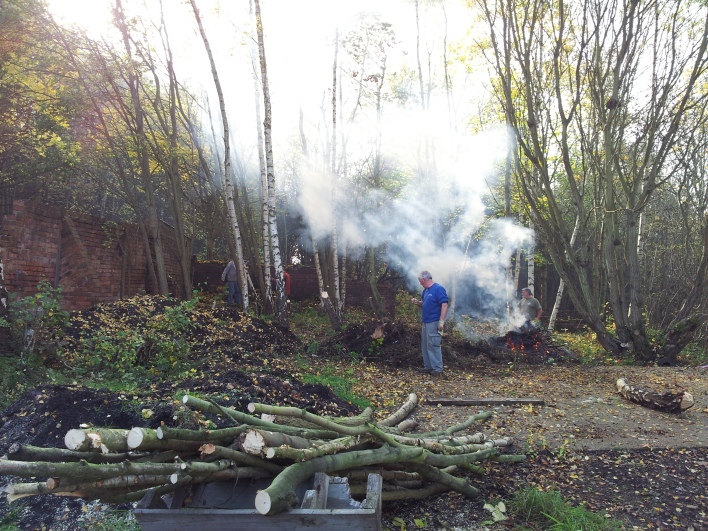 As the first trees were felled, the volunteers set about lopping off the small branches with hatchets and bow saws to feed the fire. The larger trunks were stacked by a saw horse ready for logging later in the day. Glen sharpened up the hand tools and axe to help keep things moving, and volunteers John and Alan put these to good use when the chainsaw had to be retired for repairs. 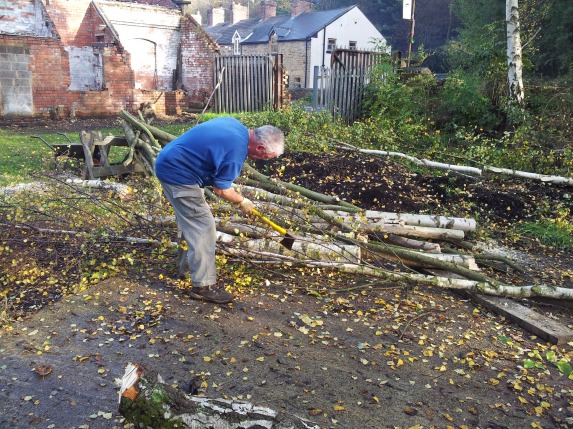 Stripping the felled trees for firewood

Work continued steadily throughout the morning, and the fire was burning bright, helping us to clear away the large mound of roots and twigs from previous excavation work around the switchgear building. After a short break for lunch, and the arrival of a new chainsaw, the group got right back to work and all hands joined in with the felling of the larger trees.

Controlling the felling is a careful job. A rope it secured to the tree to be felled, the fall path is decided, and the team all pull together to help to ensure the fall goes as planned.

As the last few trees had to be tackled, the roping became more of a challenge. Step forward local volunteer Anthony who soon proved himself an agile climber, helping to fix the rope and ensuring the group could finish the job.

Once felled, the tree trunks can be logged, with the wood being stored for use in the stoves and open fires of neighbouring houses during the coming winter.

By mid-afternoon, the view of the west end of the site had changed completely, the boundary wall by Wath Road was fully visible once more.

On the ground the footprint of a colliery building was now clearly discernible, with foundation stone work and brick wall lines. Stood by the switchgear building,  the site now stretches out in front of you. As they began to gather up their tools and head home – whether for World Cup rugby, or an early trip on the Halloween special at Elsecar Heritage Railway  – the volunteers stood back and reflected on progress.  There is plenty of logging still to do, but it can wait… 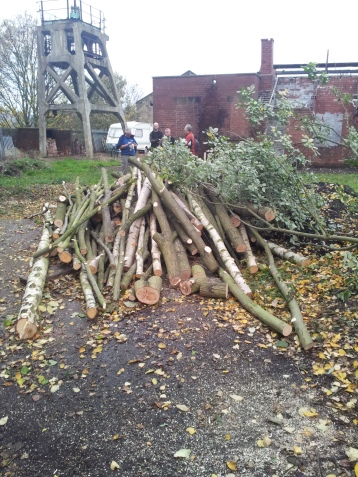 Not a bad day’s work!