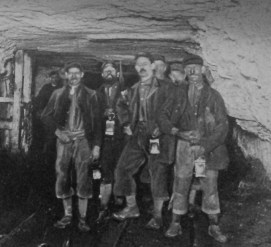 The year ended quietly at Hemingfield; with strangely mild temperatures but constant rain, bringing floods to the North. Our final open day in December was, unfortunately, rained off, but the Friends continued with their current research projects, and set to planning events and identifying new opportunities to pursue in the new year. Elsewhere bigger events dominated the news…

Kellingley – the end of ‘Big K’

In the wintry silence, the whole country witnessed the end of an era: on 18th December 2015 deep coal mining in the United Kingdom drew to a close with the closure of Kellingley Colliery, at Beal in North Yorkshire, following the closures of Thoresby and Hatfield collieries earlier in the year.

Kellingley was first opened by the National Coal Board in 1965, and following privatisation in 1994, and the vicissitudes of UK Coal’s management, had continued to supply Drax power station with steam coal until the end. The final tonne of coal mined from Kellingley will be sent to the National Coal Mining Museum for England.

ITN’s Calendar news programme had a number of reports on the fate of Kellingley. The Guardian published a reflective piece on the history and decline of coal mining in the UK; the National Coal Mining Museum for England posted some poignant staff profiles on their experiences of the closure, while a historian at the University of Sheffield compared the fate of the UK’s deep coal mining industry to that of Spain.

The Coal Authority, who are the agency responsible for licensing the extraction of coal and for dealing with environmental and subsidence liabilities from historic mining, struck a historical note:

“The closure of Kellingley Colliery marks the end of an incredibly significant period in our country’s social and economic history.”

They also prepared a timeline of British Coal Mining which is worth reviewing for the scale of production and numbers employed in the industry over the past 200 years:  https://www2.groundstability.com/history-of-coal-mining-timeline/

The full story behind the last deep mine closures,  involving economic, political, financial, and environmental concerns, is complex and contested. However the scale and importance of the industry to the UK is undeniable, as Sir Richard Redmayne wrote some eighty years ago:

In reviewing the position from the point of view of the Coal-mining Industry, we are considering one of the most ancient of British industries, and not only the industry on which is founded our commercial greatness, but that which is the origin and basis of what we know as the Industrial Era, and which, so far as one can foresee, must continue to constitute for civilised man the chief source of power, heat and light.

Coal mining fueled the industrialisation of the country, supplying energy to power machinery, increasing productivity. Coal and coal products were also essential elements in the production of iron and steel to build the new coal-fired boilers and engines – stationary and locomotive which transformed how Britain and the world worked, traded and traveled.

The ‘foreseeable future’ is, and always was, contingent on the reserves available, costs of production and competition in supply. It is not a simple story of growth. Although mechanisation and innovation in technologies and techniques have increased productivity, collieries (indeed mines of all kinds) have always closed – extractive industries are inherently self-negating over time, as minerals are exhausted, or operating costs of extended mining increase over the lifetime of a pit.

The Second World War saw  a surge in demand for fuel, of all sorts, and led to the development of new extractive methods including opencast (surface) coalmining on a large scale, and the widespread adoption of face mechanisation (cutting, loading and conveyance) technologies.

The postwar settlement led to the nationalisation of the private industry, with the National Coal Board taking control from January 1947. From the 1950s onwards industrial health concerns came to the fore, focusing on cleaning up industrial towns and cities, specifically removing black smoggy pollution through emissions (Clean Air Act 1956).

These steps foreshadowed the growing awareness of the environmental impact of fuel consumption and the pollution of the air, land and water, though the awareness was limited: the 1950s saw significant petroleum power generation, and of course the early days of civil nuclear power generation.

The de-industrialisation of the UK energy economy over time saw decreasing reliance on coal in Britain’s industries, and substantial competition from oil and natural gas. Major coal consumers such as the railways disappeared from the market in favour of liquid fuels, or electricity, with the termination of mainline steam in 1968. Likewise the demand for coal products, such as coke and some bye-products also declined as steel and other industrial users went into decline.

The 70s and 80s forever bear the weight of political strife in the modern story of coal, with confrontation, recrimination and very real human tragedies as organised labour and the state came into frequent conflict. At the same time, there were also significant global changes in the supply and consumption of energy by industries, and therefore the demand for coal, whether publically or privately-owned.

In the 1970s, the whole world became much more aware of energy security as the politics of oil production and supply from Arab states and OPEC members boiled over in the 1973 Oil Crisis. This disrupted the world economy and revealed the dangers of an oil dependency. Oil’s loss may have seemed to be coal’s gain, as the security and longevity of the nation’s coal reserves were appreciated and regularly reviewed. For a brief time, the future for coal appeared positive. The black stuff was energy-rich, a chemical gem with myriad industrial properties waiting for science to find new uses.

The Coal Industry Act 1977 extended the scope of the NCB’s activities from the Coal Industry Nationalisation Act 1946 to include handling of petroleum and international research collaboration. With government and Trades Union support the National Coal Board invested in fuel research with coal and coal products, and participated in international groups on experimental gassification and other schemes.

National energy security became a public policy issue, something which we saw influencing the drive for North Sea oil and natural gas in the 1980s, and which is echoed in the current interest in inland deep shale fracking (hydraulic fracturing) for oil and natural gas which has brought profits and at least temporary energy security to American producers, but mostly fears and protests to our shores.

Undoubtedly following the Electricity Act of 1989 – the privatisation of electricity generation and the break up of the Central Electricity Generating Board had significant and unprepared-for consequences on the still-nationalised coal industry. A determined preference for new gas-fired power generation using the then new British sources of natural gas, and a glut of cheap coal imports from America, Russia and Columbia all challenged the long-term viability of the UK deep mining industry, whether in its nationalised or privatised condition after 1994.

In 2014 79% of the remaining demand for coal was from electricity generation, with around a further 10 per cent used for the manufacture of coke. The Digest of UK Energy Statistics (DUKES), and other statistics produced by the Department of Energy & Climate Change tell their own tale in this respect.

Despite the declining role of coal in total energy consumption, it is important to note that in 2013 over 30% of electricity generation still came from coal-fired facilities.  In 2013 the UK was still the third largest consumer of coal in the European Union, behind Germany and Poland, taking 60 million tonnes from a total of 330 million tonnes (see: DUKES 2015, chapter 2), however as we have seen, the greater part of this consumption was met by coal imports rather than domestic supplies.

Black fossils and Green futures? Coal and the environment

From the 1980s onwards the impact of sulphur and CO2 emissions, an understanding of the potential dangers of climate change from the greenhouse effect and global warming became more widely understood and led to global agreements as well as emissions reduction targets being enshrined in legislation, nationally and throughout the European Union.

In recent years the Carbon Price Support system has lead to significantly increased costs per unit of power generated at coal-fired power stations. The Industrial Emissions Directive (IED) which comes into force in Europe from January 2016 also adds further pressure to fossil fuel power by limiting emissions of Nitrogen Oxide.

These environmental factors go some way to explain why power generators are seeking to phase out coal from their production. Drax, the power station supplied by Kellingley Colliery, is an example of this trend, as in 2015 it shifted capacity to biomass power generation, further decreasing the total demand for coal, and specifically UK coal. Equally, following a period of support and subsidies for green energy generation, by 2014 19% of electricity generation came from newer renewable sources.

In 2014 the UK imported 42 million tonnes of coal, a decrease of 9% on the previous year. The UK produced an output of 11.5 million tonnes of coal, of which only 3.7 million tonnes came from deep mining operations. Surface mining and cheap coal imports will no doubt continue to make up the small remainder of the UK’s coal needs as political and legal agreements squeeze the remaining scope for coal and other carbon-rich fossil fuels in industry. Equally warmer winters mean less power consumed, gas or electricity.

Understanding the history and discovering the stories of Britain’s coal mining communities are central to the aims of the Friends of Hemingfield Colliery. We are fortunate to have a number of Friends and volunteers who have long recognised the importance of recording and preserving the heritage of British deep coal mines.

This work continues, but as deep mining in Yorkshire draws to a close, we are delighted to see that members of the Friends are active in preserving memories of the industry – a selection of images from the collection of our Chair, Steve Grudgings has been published by Folly Books. The Last Years of Coal Mining in Yorkshire is a rich photographic record of colliery sites and mining scenes in Yorkshire over the past 30 years, including Kellingley:

– and of course Hemingfield Colliery itself makes an appearance; with its two shafts and headgear, original 1840 beam winding engine house and converted Cornish engine house, it is a remarkable survival.

The year ends with the last shift of the deep coal mining industry in the United Kingdom, as the last 450 workers seek a new future. As the industry which brought life to Hemingfield, and created the pit, the Friends are committed to preserving the memory of the workers, the engineers and the astonishing transformation the coal industry brought to the UK and the industrial age which it powered, and sustained. The heavy work of coal mining was hard and dangerous, but its achievements brought new technological breakthroughs, led to scientific discoveries and stimulated engineering wonders above and below the surface.

The built heritage which remains presents opportunities for exploration, for creativity, for education and social enterprise. It challenges us to discover and understand, to interpret, and to open-up and re-use. Alongside local partners in Elsecar and Hemingfield, around Barnsley, across South Yorkshire and beyond, The Friends are committed to pursuing these opportunities. As we leave 2015, we give thanks to the last shift for a job well done.