The Hemingfield Colliery Friends and volunteers were anticipating what the weather might bring, as they met up on Saturday morning for another productive working day. There had been some snow and hail that week and it was hoped that there would not be a repeat of these climatic conditions. However, should such meteorogical misery occur, the team would probably attempt to continue with their work undaunted, armed as they were with their usual indomitable spirit and protected by a grand display of various items of woolly headgear.

Members of the team on site that day were Site Director Glen, Site Chair Steve and regular volunteers Chris, Alan, Nigel, Nigel and Amanda. Archaeologist Nigel, in particular, was in for a rare treat, as Glen had arrived with some new surveying equipment in the form of a dumpy level, staff and tripod. This meant that serious surveying of the archaeological features on site could begin. As Nigel’s face lit up at the prospect of this endeavour and at the sight of the shiny new apparatus, Glen explained the equipment to interested members of the team.

Some of our regular volunteers have enjoyed previous experience of surveying techniques in their various engineering-based careers, so the use and purpose of this equipment was clearly understood by them. But, for surveying novices Chris and Amanda, this would be a completely new experience and one which they anticipated would be both fun and educational. However, they were going to have to wait until mid-afternoon before the real mysteries of the surveyor’s art were revealed! 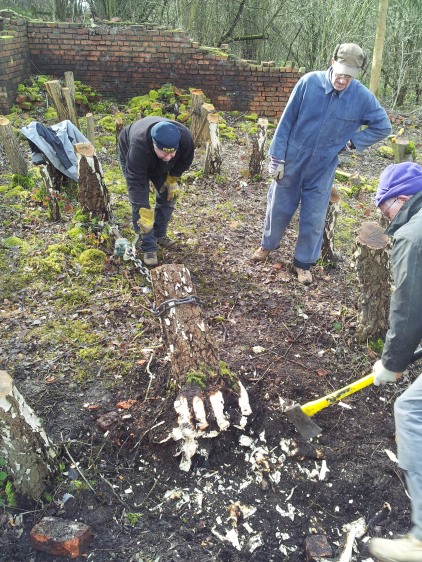 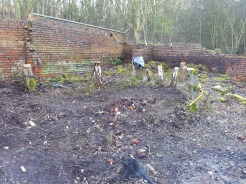 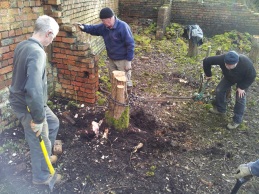 In the meantime, there were other pressing matters to attend to. Glen expressed the wish to continue with the uprooting of the tree stumps on the south-west end of the site, as part of the drive to clear the area of vegetation and rubble. This is where we plan to locate a new traffic-friendly entrance to the site. Due to some awkward twists in the road, resulting in blind bends in both directions, the existing entrance has to be relocated for safety reasons. We also aspire to build a visitor car park on this part of the site. This will be an important feature of the mining heritage centre that is envisaged for the future of Hemingfield Colliery.

The tree stumps are the remains of a silver birch copse that colonised this part of the site during its period of neglect from the 1990s onwards. The birch trees were felled on previous working days and the winching out of the remaining stumps, rooted deep in the ground, would need some back-breaking effort and not a little muscle-power on the part of the team, especially in the absence of any mechanical methods of excavation. On this particular day, the heroic manual winching team consisted of Steve, Glen, Alan, Nigel and Chris, who persevered with their laborious task throughout the day.

Journey to the Centre of the Earth

Meanwhile, Nigel and Amanda were continuing the archaeological excavations on the north-east side of the switchgear building.

On a previous working day, the excavation of a linear feature, running at a slight angle from the switch gear building, had begun. This was deduced to be a trench cut in order to lay either a water pipe or an electricity cable, probably in the early 20th century. The careful archaeological excavation of this trench continued, with some fastidious following of slight differences in soil colour and texture to determine the extent and depth of the cut feature. However, trowelling ever deeper into the earth and trundling away wheelbarrow after wheelbarrow of excavated soil, Amanda felt her prospects of locating the water pipe or electricity cable drawing ever further away. She was just about to give up hope of finding anything, when she suddenly hit upon a layer of builders sand and knew that the expected feature would soon appear. At last! Just as grey earth had given way to golden sand, the sand revealed its secret and the shiny silver surface of a metal water pipe was exposed.

The water pipe appeared to be running from the switch gear building in the direction of a pile of brick and stone rubble at the north-east end of the site. Glen suggested that, as this rubble constitutes the remains of a toilet block, the location and direction of the water pipe makes perfect sense.

As Sir Mortimer Wheeler would have done it

All that remained to do was to tidy up the excavated trench and take some record photographs of the feature. It is important to present a clean and tidy trench for official photographs for the archaeological record. This allows the true shape of the archaeological features to be appreciated and the different layers of soil to be clearly discerned. Although the pipe trench is only relatively modern, we still need to excavate, present and record it to the same high standards as older, more significant features.

Meanwhile, Nigel had begun planning the previously excavated 1930s red brick path which runs alongside the switchgear building, using a planning frame cleverly hand-constructed by Glen. Nigel’s planning involved laying the two metre by one metre frame over the feature to be recorded and carefully drawing a 1:20 scale plan onto drafting film laid over graph paper.

This is the first stage in the mapping of all the archaeological features on the Hemingfield Colliery site. We intend to create a permanent drawn record of all our findings in this way, recording all the archaeological features we have excavated so far, as well as those yet to be discovered. Some of these features will consist of more complex elements than others and will take longer and be more difficult to record. The 1930s brick path, for example, is composed of hundreds of randomly-placed, assorted bricks and, hence, will be more complicated to record than the pipe trench.

During a delicious and fortifying chip lunch, generously provided by Chris and eaten under the concrete headgear, the team discussed the progress of the day’s work so far. As a flurry of sleet descended, the hardy team failed to be discouraged from their unusual picnic and set about debating some of the pressing matters of the day, such as the true superiority of South Yorkshire chip shops and the dancing skills of the male member of Boney M.

After lunch, with the two-dimensional recording of the brick path underway, it was time for a surveying team to begin recording the area in three dimensions. Nigel recruited surveying novices Chris and Amanda to help (cheekily poaching Chris from the stump-winching team) and the work began. First, Nigel explained the importance of setting up the equipment correctly and demonstrated how to do so and then Chris had a go at positioning the dumpy level correctly onto the tripod and levelling it via the inbuilt spirit level. He proved a quick learner.

Nigel explained that one of the guiding principles of recording archaeology is to make sure all the excavated features are recorded in three dimensions. Two dimensions (eastings and northings) are measured whilst planning and the third dimension (height) is found by using the dumpy level. As Nigel set off across the site with the staff (the measuring device), holding it vertically at various points on the ground, Chris and Amanda read the height measurements on the staff through the dumpy level telescope. 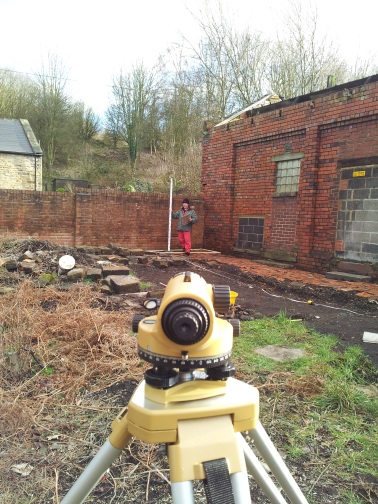 By using the dumpy level to relate the readings on the staff back to a known height or datum level, it is possible to work out the height above sea level of each archaeological feature. In Britain, datum levels have been established by the Ordnance Survey and are often marked by small arrow-shaped signs, which are carved into the sides of buildings. As we excavate further, we will be able to use these datum levels to create an accurate record of the depth and location of the archaeological features we find.

It was an interesting and enjoyable learning experience, which we hope to continue on future working days.