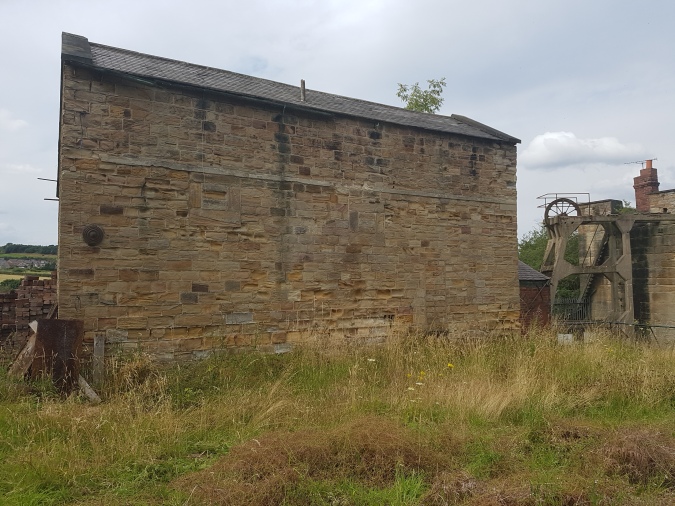 Too hot to handle…

Saturday presented a very British problem: an actual summer’s day, filled with sunshine and calling for hats, lotion and shade. Friends Chair Steve, and Director Glen were on site ‘early doors’, accompanied by volunteer and ecologist Antony who was conducting a survey of the wildlife in the pit’s boundaries.

Fauna aside, the flora were also found in abundance. The sun and rain of the preceding fortnight caused the grass, bracken and other plants to shoot up once more. Cometh the weeds, cometh the strimmer, as site manager Glen set about tidying the colliery, maintaining the good work the Friends and volunteers have been doing for the past two years. 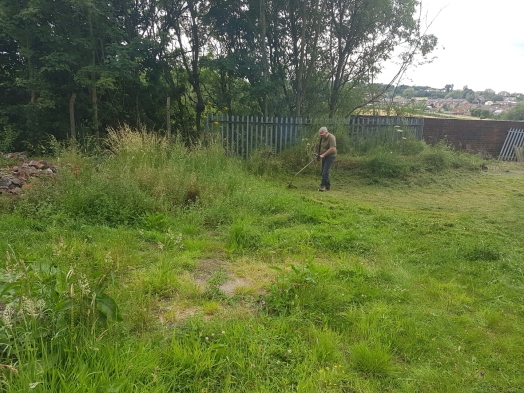 The day’s activities consisted of continuing the excavation of the pityard surface layer by the Wath Road boundary wall. The main challenge being the mound of demolition rubble and dumped material which has accumulated over the last 30-40 years or so. Friends Chair Steve set the pace as the sun rose steadily in the sky. Hemingfield was HOT!

Not quite the Valley of the Kings, but hot sun shone on the dig

Joined by volunteers Chris and Antony, the excavation continued, revealing the collapsed remains of the old boundary wall, demolished in the 1990s, and also an assortment of weird and wonderful objects, all of which fall squarely into the generous category of “post-medieval” archaeological finds: a concrete post, a reinforced water pump tube, a number of old file tools, assorted car parts, and most distinctly, the door from a mark 1 Austin mini! 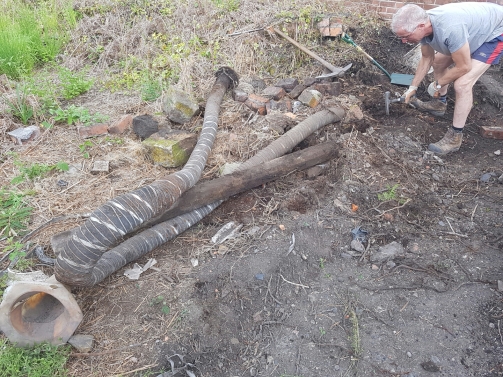 the things folks throw away…

Alongside the modern objects, older building materials also continued to merge – victorian bricks and building stone which may be associated with former colliery buildings demolished in the 1920s and 30s.

Fun in the sun

Over lunch the Friends discussed the forthcoming Milton Gala event on Sunday 31st July which the group plans to attend to raise awareness and celebrate the heritage of the area.

They also discussed a number of exciting new research projects and potential site developments which are very promising – watch this space.

In the afternoon, after the mad dogs had been out in the midday sun, the volunteers were bolstered by the arrival of regular volunteer John and Glen, picking up the pace with barrowing the spoil away, stacking the reusable bricks and separating building stone from the rubble.

The Friends were also pleased to show visitors around the site. In the sun, the sound of water cascading down into the darkness of the old engine pit made for a curious contrast:

Amongst the bricks, tools, rubbish and debris, there can emerge intriguing and important markers to the past: signposts for the history of the site, to be sure, but also to the wider history of the area. Saturday’s digging revealed a broken marker brick with the words /LECTRIC YEP:

This relates to the Yorkshire Electric Power Company, a private electricity supply company for the area. The Y.E.P. supplied electricity at over 2,000 volts A.C. to Hemingfield Colliery during its life as a pumping station from 1921 onwards. The units of power consumed in pumping the Barnsley and Kent seam levels, and powering the electrified winding engine were closely monitored by the South Yorkshire Pumping Association (1918-1929), and later the South Yorkshire Mines Drainage Committee (1929-1947).

The YEP Co. was incorporated by a special Act of Parliament in 1901, though subject to much opposition from local authorities who were also interested in supplying power. The Y.E.P. scheme began in October 1900 with the Yorkshire Electric Power Syndicate Limited and brought together large manufacturers and owners to lobby for the passing of the Bill. The YEP bill saw off the competition by merging its interests with the backers of a rival scheme, the South Yorkshire Power Bill. In Parliament the support for the bill was substantial, as Mr Pember, Q.C., promoter of the Bill put it :

There were 63 firms in the syndicate, 13 of whom employed 55,000 hands, having a horse-power of 42,000, and whose works had a rateable value of £216,000. There were about 100 gentlemen in the district ready to give evidence in support of the Bill it it was needed. The district in which the promoters desired to operate was 1,80 square miles. It included and was bounded by Skipton, Ilkley, Benley, Otley in Wharfedale, Netherley, Tadcaster, Selby, Goole, Thorne, Doncaster, Tickhill, Kiveton Park, Rotherham, Handsworth, Saddleworth, Marsden, Rushworth and Todmorden, and included the boroughs of Sheffield, Leeds, Bradford, Hudersfield, Wakefield, Halifax, Dewsbury, Rotherham and Barnsley, and in the district there were 27,000 factories and workshops with a horse-power of 2,000,000.

It was dissolved on 1st April 1948, as national coordination of electricity boards came into effect following the Electricity Act 1947. These facts give us some possible dates to think about to date the finds on site at Hemingfield. It also fits nicely with a cable Joint marker situated by the cottages at Pit Row, opposite the colliery.