Nothing but blue skies

Unaccustomed as we are to sunshine and summer days, the Friends and volunteers were delighted to renew acquaintances and bask in the glory of another beautiful day down at Hemingfield.

Friends Director and Site Manager Glen was on site early,  joined by regular volunteers Chris, John, and Keith who rolled out the barrows and rubbed on the sun lotion for a hot day’s work at Hemingfield, continuing to remove the overburden and demolition debris of the old boundary wall, as well as revealing the odd find here and there.

With the Olympics in Rio opening the night before, and England hanging on in there against Pakistan in the cricket, a jovial summertime air pervaded the colliery, and conversation flowed as the team dug, shovelled, sorted, reclaimed and barrowed the morning away.

Friends and volunteers removing the rubble

Amongst the passing thoughts of the team, the virtues of darts as an Olympic event may not have gained many supporters, but the steady application of effort was certainly paying off as the mound of rubbish disappeared and the excavation trench was evened out, enabling the Friends to record more of the sub-surface features and hopefully point to more evidence of the history and development of the colliery.

Amidst the debris, odd links to the recent – and yet distant – past sometimes emerge, even in the smallest of forms. Such was the case with some of the plastic wrappings and disregarded tape in the soil when it featured the “National Coal Board” name. 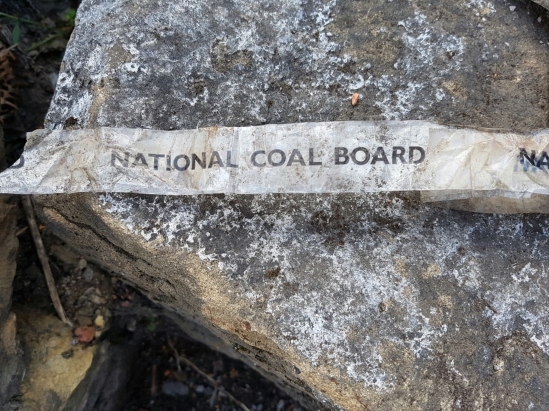 NCB tape in the rubble

The National Coal Board was established on 15th July 1946, with the enactment of the Coal Industry Nationalisation Act 1946. It took on responsibilities for the management of the nationalised coal industry; the pits, people, plant, land and housing.

The NCB, responsible for some 958 collieries in 1947, was renamed as the British Coal Corporation in March 1987, when there were around 94 pits under its control. It had operated as “British Coal” since mid 1986. The nationalised organisation lasted until 1994 and the passing of the Coal Industry Act 1994 by when there were around 53 concerns remaining. The outstanding affairs of BCC were finally wound up in 2004.

Back on site and the biggest challenge remained the removal of the demolished boundary wall. The wall was in a poor state of repair by the 1990s, and its demolition and replacement by a new wall seems to have been a simple bulldozer task of pushing over the old and just building the new in front of it. For the Friends this leaves us with an awful lot of bricks. However they are very much a period feature we wish to save and possibly reuse for repairs and sympathetic building on site. To this end reclamation remains a key goal. Chipping away mortar, often coal dust mortar, and separating the brokens from the salvageable is slow-going, but satisfying work.

Yod one out? barrowing the bricks

The fantastic collection of salvaged bricks.

After sweating it out in the midday heat, the Friends and volunteers paused for snap time. Sat in the shade, there’s always time for reflection along with the odd quip, together with more serious discussions of research underway, and the chance to hear updates from the Friends on progress with the conservation and promotion of the site.

Not forgetting the beauty of the countryside around us. With the canal below, and farmers’ fields across the valley, it’s a real pleasure to be on site.

View of Hemingfield from under the main headgear

A buzzard, chased off by crows fending for their young, flew over the pit yard, soaring above the old green and wooded muckstack behind Pit Row. Meanwhile, stopping off just below, the steam engine Birkenhead pauses for a while, the busy crew from Elsecar Heritage Railway keeping a watchful eye over their splendid saddletank.

Elsewhere on site, the cool, gentle sounds of dripping water echo from the depths of the engine shaft, the oldest shaft at Hemingfield, dating from 1842. 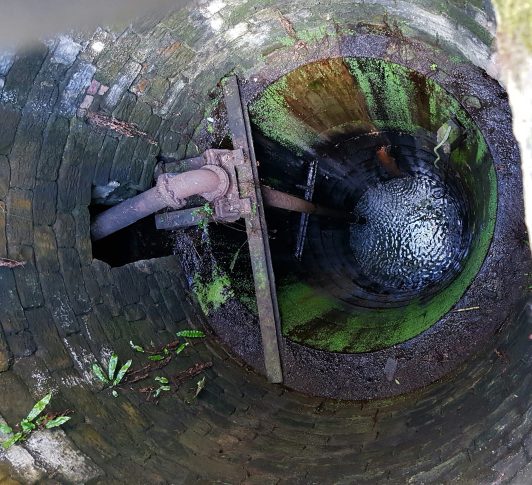 Amongst the soil, bricks and rubbish a couple of small finds were of interest, a couple of electrical items pointing to the powered past of the pumping station years.

With no maker’s name in evidence, it is difficult to date this form of insulator or to specify its function in the working of the switchgear and electrical controls of the pumping station, but there is something attractive about the shiny glazed ceramic emerging from the dark soil and debris.

One of the most enjoyable parts of being part of a group with shared interests is that research and discoveries can come from many different angles, and build upon each others’ work. Such was the case in a lunchtime discussion as we compared the underground layout of the pit in 1852 with the working arrangements at the end of active coal mining in May 1920. As well as pointing out the almost unchanged layout of the pit bottom, leading away from the heavily supported shaft pillar of unworked coal, a number of underground roads and further board workings could be matched between the start and end of our story.

These insights from two very different sources will aid our historical research into the colliery, but also serve to inform some of the new creative work the Friends and volunteers are hoping to explore in the coming months, bringing the world and experience of life underground back to life, with some very exciting possibilities ahead.

With a busy and productive day in the colliery winding down, the day still had the odd bit of excitement in store as a distant buzzing could be heard.  Was it a bird? was it a plane? Erm, the latter, sort of…an autogyro, something made famous by Sean Connery as James Bond in You only live twice, but invented by Kenneth Wallis (1916-2013). A suitably striking end to the day! 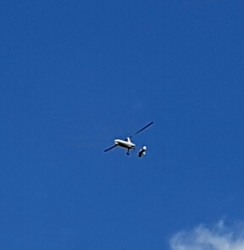