Saturday was another wet one; a disappointing summer’s day at Hemingfield, and unfortunately the working party and open day were called off. The Friends and volunteers staying indoors to return again on a drier day.

Undeterred, everyone turns their time to good account: the Directors continue their planning work to ensure the future of the site. Meanwhile our active volunteers dive back into their own pursuits inspired by the site. Whether it be investigating the social and economic history; modelling the geological context of Hemingfield; studying the wildlife on site, or seeking inspiration from the variety of flora and fauna to create new artwork, providing new perspectives on the colliery.

In future posts we will start to share the fruits of all of this time and effort. For now, this post will bring together a few odds and ends from some recent delvings into the past, some mining miscellanea.

Although the Friends of Hemingfield Colliery inevitably focus their efforts on the origins, history and development of the Low Elsecar/Hemingfield site of Earl Fitzwilliam’s Collieries, it is impossible to delve into the story of coal mining in South Yorkshire without encountering references to people, places and events from all around the area. The pit’s story is but one part of a larger regional history; the region’s history is itself only a part – albeit a most important part – of the national story of coal.

From the research and collections of our volunteers, we find some interesting insights into how mining in Yorkshire has developed over more than 150 years

In 1916, during the First World War, with the nation struggling to maintain levels of production to support the war effort, an increasing interest was taken in the loss of coal left underground by old workings, and the possibility of reducing any such losses in future. Local mining engineer Charles Edward Rhodes (1845-1920) was asked for his opinion on the matter, and his answer provides some insights into the history and methods of coal mining in Yorkshire from the Nineteenth century. Here we give an extract from his correspondence:

“The general practice adopted in working the Barnsley Seam of Coal, which was the seam principally worked prior to 1860, and which also applied to the Silkstone and Parkgate Seams of Coal, and other seams then worked, was a system of bord and pillar work. This method of bord and pillar was not uniform in character and varied considerably at different collieries.

It must be borne in mind, however, that the great bulk of seams worked laid at a comparatively shallow depth from the surface, the Barnsley, Parkgate, and Silkstone Seams being worked near to the outcrop, and the deepest Barnsley Bed pits were not more than 150 to 200 yards, with the exception of  the Oaks, and the Holmes Collieries which were worked at a depth of over 300 yards.

Nearly all of the collieries were, therefore, working at a shallow depth, and the bord and pillar system did not involve, working under those conditions, any serious loss of coal, although in some cases areas were closed owing to creeps being set up due to the pillars being left too small, these nevertheless were not of frequent occurrence.

Very considerable areas of coal, however, were left owing to water difficulties, due primarily to the fact that pumping facilities in those days were not adequate for dealing with water on a large scale, and also that the collieries, speaking generally, were small, each set of pits dealing with limited areas of coal, and any general scheme for pumping or dealing with the water was never entertained, and as the quantity of water gradually increased as the workings of pit after pit approached the outcrop, in the course of time large quantities accumulated and the pits did not attempt to work below the level of the water line.

Later on, and especially immediately following the [eighteen] seventies, collieries were sunk at very much greater depths, and in many cases the old system of working by bord and pillar was introduced into the new collieries, with very costly, and in many instances, disastrous results, as it was found that pillars which were perfectly satisfactory at a depth of one or two hundred yards were useless when applied to the different conditions in roofs and floors brought about by working coal at double, and in a number of cases, treble the depth, and there is no doubt that considerable loss of valuable coal was consequently brought about.

When it was found that the difficulties of working bord and pillar at the depths I have indicated were prohibitive, the long-wall system of working was gradually introduced, but in the teeth of very considerable opposition, especially from the workmen, who had always been used to the bord and pillar system and each set of workmen consisted as a rule, of four, having his own working place and being responsible for it, the pits as a rule only working one shift. It was, however gradually introduced and is now practically universal throughout the districts in all the newer collieries, and at any rate at all the collieries working below a depth of, say, 200 yards.”

The Oaks – deep and dangerous pits

The Oaks collieries have a complicated history, with multiple pits being sunk to different seams over time from the 1820s onwards, under several different ownerships. In March 1847, there had been a disaster at the Oaks, also known as Ardsley Main, claiming 73 lives.

A plan of the mine workings given below is taken from a parliamentary investigation into a number of fatal explosions and accidents- Reports on the Gases and Explosions in Collieries, written by Sir Henry T. De La Beche, Dr Lyon Playfair and Mr Warrington Smyth, 1847: 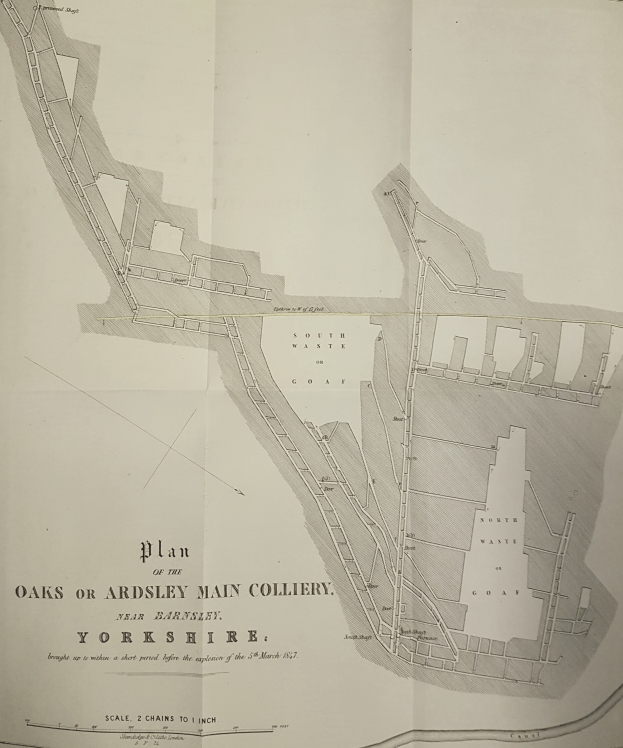 March 1847 saw a terrible disaster claiming 73 lives at the Ardsley Oaks Colliery, twenty years before the Oaks Colliery Disaster of 1866

The report assessed the cause of the disaster as being a naked candle light being used by a workman which ignited gases released from the goaf, or the stone waste packing of old workings. The extent of the disaster was, however, also a fatal consequence of the design and working methods of the whole operation, with upcast and downcast shafts only a few feet apart:

“The shafts of the Ardsley Main Colliery are not only too near, but the work seems to have been so ill executed that much of it fell away in consequence of a fire which occurred in the downcast pit, then the upcast pit, about 14 months since, and that the blast of the 5th instant readily broke a passage between them, so far still further damaging the partial ventilation kept up between them immediately after the explosion.”

p.56 of Report on the Gases and Explosions in Collieries, 1847

The report’s authors very tentatively pressed for active, regional inspection of coal mines, to ensure proper methods and good management were enforced. At that stage, independent experts and the government of whichever political stripe were extremely reluctant to intervene in the working of private companies:

“Jealous as the coalowners should properly be of any undue intermeddling with their collieries, it may nevertheless be true that a judicious system of superintendence in a district, by which the proper ventilation of collieries, efficient knowledge on the part of subordinate agents, and proper punishment for foolhardiness or carelessness on the part of the colliers may be secured, would be of great advantage to them individually and collectively, and be the saving not only of lives, but of much capital, securing them, in the case of accidents, from many an unjust accusation for neglect.”

p.11 of Report on the Gases and Explosions in Collieries, 1847

It would be several years until the first general system of inspection would be introduced under the The Coal Mines Inspection Act of 1850. In a further Parliamentary paper in 1850, Report on the Ventilation of Mines and Collieries by John Phillips, it was thought that significant progress had been made at Ardsley Main/the Oaks:

“Ardsley Main has now, under the advice of Mr John Woodhouse, and the superintendence of Mr Wilson, enlarged its air channels, increased the flow of air, and amended the arrangement of the works. A new and powerful furnace is in process of construction; lamps are extensively used in the works; exploring drifts are kept well a-head, and improved discipline reigns in the mine.”

p.46 of Report on the Ventilation of Mines and Collieries, 1850

Despite the apparent progress, in 1866 the Oaks would be the site of further disaster, indeed the worst in British history at the time, and still the most terrible mining disaster in England, claiming 383 lives.

The Dearne Valley Landscape Partnership have recently brought a new focus to the history of mining in our local landscape. Firstly through their support for community research into the human cost of tragedy of the Oaks Colliery Disaster in 1866. Secondly through the DVLP’s assistance in the conservation of the Barnsley Main Colliery site.

Recently the DVLP together with Barnsley MBC and other partners staged the first in a series of clearance events at the Barnsley Main site. Alongside this work, a Friends of Barnsley Main Colliery group is being established.

We look forward to supporting the important work of this group, working to maintain the Grade II listed Barnsley Main headgear and winding house – a modern survival on the site of the old Oaks colliery where the disaster occurred almost 150 years ago.

Despite the catalogue of explosions and the clear and present dangers of working the Barnsley beds at depth at the Oaks colliery, the demand for coal and the profits to be accrued continued to drive companies to work the royalties. Ultimately there were in fact two Oaks sites – the original Hoyle Mill side, which became known as Old Oaks:

and the later Stairfoot side, which was known as the New Oaks.

As we’ve often reported, the work on site, whether excavation, clearance or just tidying inside the buildings, will often reveal intriguing finds; odd bits and pieces; once everyday objects now unfamiliar or obscure. The tools and products of a different time and world of work. One such example, with an oddly local grandeur, was a can of chemical thinner made by the perhaps unlikely sounding “Yorkshire Imperial Plastics”. 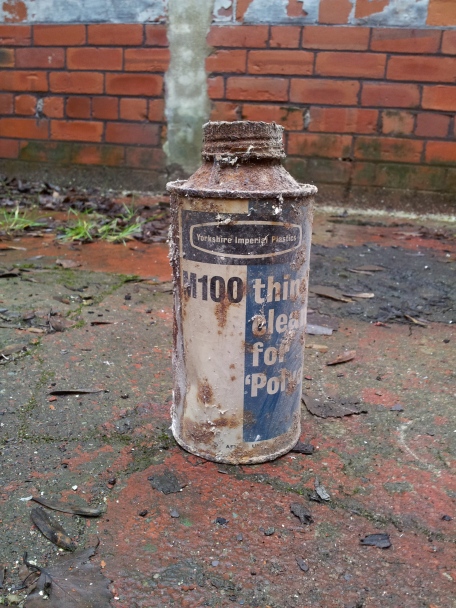