Grey cloud and autumn mist lingered over the Knoll Beck in the valley to Elsecar as the Friends and volunteers arrived at Hemingfield Colliery for another open day.

Preparation was the name of the game this weekend for the last working party before the Friends hand their 1846 winding engine house over to the care of building contractors who will be re-roofing the whole building, ensuring it will be protected well into the twenty-first century. 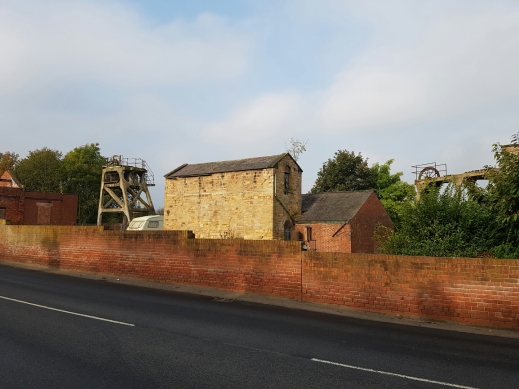 Friends Director and Site Manager Glen opened the pit gates, joined by Friends Chair Steve, and a whole host of regular volunteers, John, Nigel, Alan, Keith and Chris, all eager to get everything ready for next week when contractors arrive, scaffolding the Victorian winding engine house inside and out in order to begin the significant programme of roof works.

All of this has only been made possible through the generous funding support of Subterranea Britannica, The Association for Industrial Archaeology and the Dearne Valley Landscape Partnership.

On the right path

Out in the yard, the Friends set to putting down a temporary path for the contractors to carry materials over to the winding engine house. As the path needed to cross part of our site archaeological excavations, it was decided to put down a membrane to protect the remains and pour on a layer of earth to even the levels, ready for the contractors to put down a plywood run to work on.

The kit ready for use. 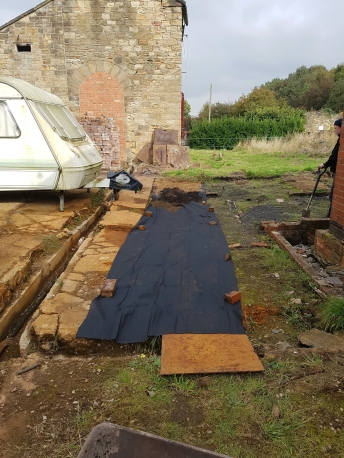 Earth laid on the membrane ready for the contractors

Part of the careful planning for the conservation work has included the compilation of a management plan and several site surveys.

The latest work required a review not just of the condition of the building, the roof structure, drainage and materials, but also of the wildlife on site. For several years the upper roof space of the abandoned winding engine house had been used as a one of a number of roosts for a barn owl. Although not currently resident, the Friends have made provision for our strigine friend during the winter works on site with an owl box. Saturday saw the fixing of the box to the headgear. 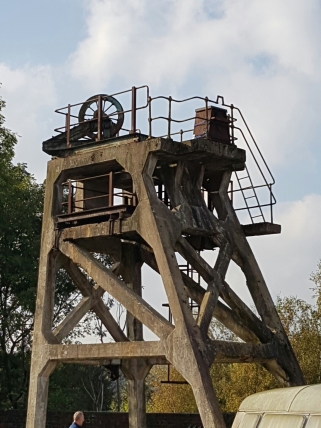 Getting ready for the scaffolders means tidying the winding engine house inside and out, moving obvious obstacles and getting the building and the wider site ready for contractor access and work. The team got straight to work, with buckets, spades, wheelbarrows and tarpaulins to clear the way and protect the remaining machinery during the re-roofing process.

Inside the lower winding engine house

During the day, the Friends were delighted to be visited by members of the Sheffield School of Architecture (SSoA) team working on the Elsecar Heritage Railway Live Project. The group from the University of Sheffield are engaged in a 6 week project working with our friends at the Elsecar Heritage Railway. Their brief includes proposals for stations at Hemingfield and at Cortonwood. This fantastic project will see the team tackling how to connect with the route from Elsecar Heritage Centre, down the Greenway to the Coalfield Memorial Line’s end at Cortonwood.

The SSoA Live Project team will be applying their technical know-how and creative talents to tackling the real-world challenges of site and building design, planning considerations, road crossings, visitor experience and sustainability. The student architects are considering how best to highlight points of historical and ecological interest in the valley, following the Knoll Beck from Elsecar to Cortonwood, alongside the Dearne and Dove Canal and the TransPenine Trail. Their work ties in closely with the Friends of Hemingfield Coliery’s own hopes and aspirations for the valley, and serves to reconnect the Colliery site with the canal and rail links which were its lifeblood from 1846-1920.

The Friends of Hemingfield Colliery were able to share some of their own experience of SSoA Live Project work in 2014, which included this fascinating video presentation:

After visiting Hemingfield the Live Project team were heading straight back to Elsecar for a great evening event at the Elsecar Heritage Railway: Twilight Steam. We’re already looking forward to see the photographs and footage from this evening steam event and guided tour of the train shed and the railway yard. 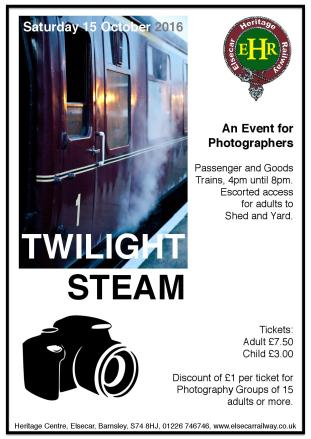 After thanking the Live Project students for their visit, it was time to collect up the tools and call it a day for the working party. As the Friends and volunteers departed for home, everyone was pleased to see further progress on site, and eager to watch in the next few weeks as we see a transformation on site – with scaffolding arriving on Tuesday and the process of removing the roof commencing shortly thereafter.