Fixing the roof while the sun is (still) shining…

After a cloudy and unpromising start to the weekend, the Friends of Hemingfield Colliery were treated to a glorious autumnal day, with blue skies and sunshine smiling on the pit yard. Site Manager Glen and Friends Chair Steve opened the gates to catch up on the progress in the restoration of the roof of the winding engine house, and welcome regular volunteers, Nigel, Alan, John, Keith and Chris to another day’s working party activities.

Since the last open day, much progress has been made in the re-roofing of the winding engine house. The roofing contractors sent a joiner to check and replace the rafters which had become too water-damaged and rotten to be of further use. A number of the existing timbers, beams and rafters in the brick-built lower part of the winding house have been cut out, and new timber has been jointed into the good woodwork to strengthen the whole. The removal of the old woodwork has also revealed some interesting elements o the building – at least one pitch pine beam which was a common colliery material, used for shaft guides throughout the Victorian period.

Out with the old: rotten roof timbers and wall plate materials, including a substantial pitch pine timber.

Meanwhile the roof of the oldest part of the engine house, the tall and narrow sandstone building, has also begun to be removed, with many old and rotten battens being removed and discarded, and the undamaged welsh slates stacked ready for reuse when the roof is being repaired. 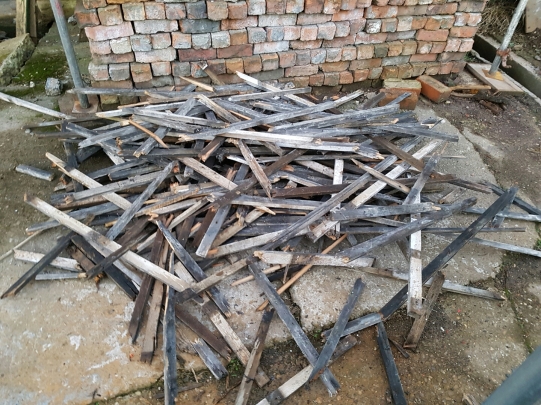 As Saturday drew on, the cloud faded away and beautiful bright sunshine shone down on the Friends and volunteers on site. It was a great day to be outdoors. 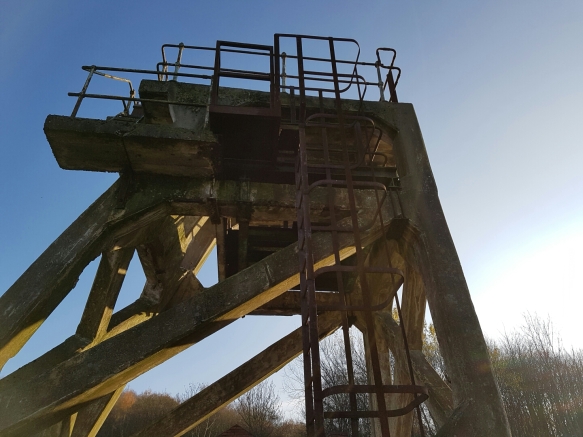 The low sun cast long intricate shadows down from the scaffolding and clearly showed the outline of the concrete 1939 headgear on the Elsecar Heritage Railway track beneath.

Coalfield line: in the shadow of the headgear

As well as continuing the brick reclamation work, the gang also continued logging up the remaining felled trunks and branches. 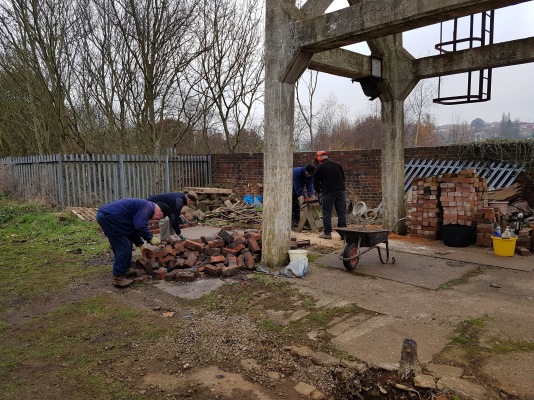 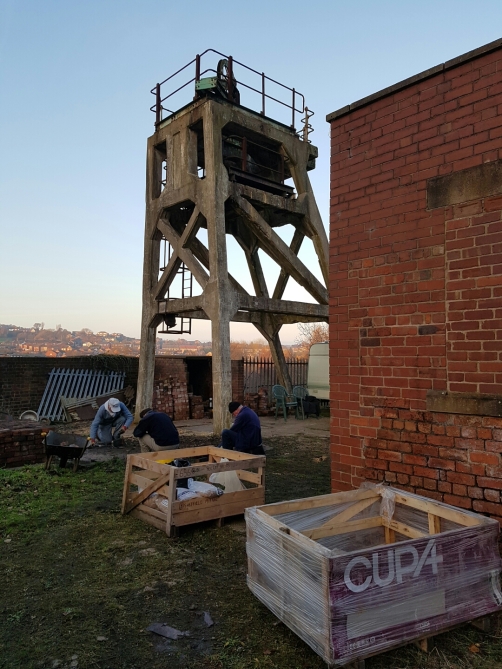 Brick chipping on a sunny afternoon

During the day the Friends welcomed a few visitors to the site, to share news of progress and future plans. We were also delighted to make contact with a former Elsecar apprentice who had later worked for the training department of British Coal, and had toured some of the Elsecar pits underground with local mining history enthusiast, the late George Smales Beedan (1931-2006), a former engineering lecturer at Rother Valley College, Dinnington.

We also took time out with local artist Iain Nicholls who is currently working on building a Virtual Reality model of the Hemingfield Colliery. Touring the site, the Friends and volunteers shared their knowledge and research to explain the functions of the machinery, the size and operation of the shafts and coal winding arrangements. Everyone is excited to see the results of this work; a new and unique immersive experience of the sights and sounds of the working colliery.

On Wednesday (23/11/16), The Chancellor of the Exchequer, Rt Hon. Phillip Hammond presented the Treasury’s Autumn Statement to Parliament. In it he gave a special mention to Wentworth Woodhouse, historic home to the Earls Fitzwilliam in South Yorkshire, and the Yorkshire seat of the family which established Hemingfield Colliery back in the 1840s.

“£7.6 million will be provided for urgent repairs at Wentworth Woodhouse, subject to approval of a sustainable business case for the Grade I listed country house.”

HM Treasury, Autumn Statement 2016. Presented to Parliament by the Chancellor of the Exchequer by Command of Her Majesty. November 2016, (Cm 9362)

This message supports the work of the Wentworth Woodhouse Preservation Trust in purchasing the house from the current owners and finding a new sustainable mixed use for the mansion. The Trust was formed with the help of SAVE Britain’s Heritage, and consists of a group of heritage experts and the heirs of the Fitzwilliam Wentworth estate. The Trust was also supported local MP John Healey, for Wentworth and Dearne, and the noted heritage advocate Robert Jenrick, MP for Newark.

The Autumn Statement might seem like déjà vu. This time last year we mentioned the chequered history of Wentworth Woodhouse, the Grade I listed mansion. The Twentieth century didn’t treat it too kindly: wartime requisitioning by the Intelligence Corps, the advent of opencast mining, the death of the 7th Earl in February 1943, nationalisation of the collieries in 1947, and the early death of the 8th Earl in May 1948.

In 1947 the house had been taken on by the West Riding County Council as teacher training facility, Lady Mabel College, in 1974 local government reorganisation saw Rotherham Borough Council take on the lease for the college which merged with Sheffield Polytechnic in a rationalisation of teacher training facilities. Rotherham Council ceded the lease in 1988, and the house was bought by Wensley Haydon-Baillie in March 1989.

Haydon-Baillie’s financial failure in 1998 saw a bank foreclose and sell the mansion to the Newbold family, headed by retired architect Clifford Newbold, his wife Dorothy and their family. The Newbolds commenced restoration works, challenged the Coal Authority for compensation for historic mining subsidence damage, and commissioned a number of condition surveys, architectural and conservation reports on the house and grounds. Sadly Mr Newbold and his wife both passed away in 2015, leaving a legacy of admiration for the house and a renewed interest in its restoration.

In a parliamentary Early Day Motion in 2015 MPs stated the case for a renewed future for Wentworth:

“That this House commends the current plans to secure the future of one of the grandest stately homes in England, Wentworth Woodhouse in South Yorkshire, by placing it in a charitable trust and opening it to the public; acknowledges the exceptional splendour of this house and recognises the work already carried out in restoring parkland, lakes, monuments and temples, as well as repairs to the house itself; underlines the huge potential stimulus to economic regeneration in South Yorkshire; and calls on the Government and the National Heritage Memorial Fund to recognise the imperative to give strong and urgent support to these efforts.”

After some trials and tribulations in securing the sale, this intervention of the Chancellor helps to secure the bid and also to sets the scene for a significant regeneration project in and around the mansion, as described in the Trust’s plans available from www.savewentworth.co.uk . This is a great development for the whole area with the Stable Block providing room for small businesses and the main hall being available for private lets, catering and conference facilities and the main state rooms being opened for public viewing with the help of the National Trust.

During the day the group were visited by friends from the People and Mining group, campaigning to establish a permanent memorial to the victims of the 1866 Oaks Colliery Disaster on the 150th Anniversary of the calamity. The campaign, supported by the NUM, has done exceptionally well in raising the significant funds required to complete the casting of a new statue by sculptor Graham Ibbeson.

Following a number of fund-raising events and generous donations from local voluntary groups and many individual donations, the statue is almost complete, pending construction of a plinth close to Church St in Barnsley, and final installation is expected in May 2017, the 150th anniversary of the official report into the Oaks disaster.

December 2016 sees the fruition of a number of activities commemorating England’s worst mining disaster. The Dearne Valley Landscape Partnership, supported by the Heritage Lottery Fund have worked with the local community to research the details of those killed in the disaster and to explore the impact through creative writing sessions with poet Ian McMillan. They have also commissioned a virtual reality recreation of the Oaks colliery.

Bringing together the historical research, community engagement and creative work, the DVLP are working closely with Barnsley Museums to curate a new exhibition on the story of the disaster and its consequences. The exciting new exhibition, When the Oaks Fired, will open on 30th November 2016 and run until 8th February 2017. For more details, please see: http://www.experience-barnsley.com/when-the-oaks-fired-englands-worst-mining-disaster

Alongside the exhibition, the anniversary will see a large variety of events: