The Friends opened the gates to another busy open day, in what was by turns a bright, but exceedingly wet, working day. Site Manager Glen welcomed regular volunteers Nigel, Alan, and John and was pleased to see the returning Peak District contingent of experienced mining archaeological enthusiasts John, Phil and Chris.

Splitting into small groups, work continued in two areas – one excavating the lower terrace, the north-facing area terrace above the Elsecar Heritage Railway line. The other was by the site entrance, next to the pit gates.

Regular volunteers Alan and Nigel picked up the excavations where they had left off last time, uncovering a little more of the lower terrace, around the brick pit feature. 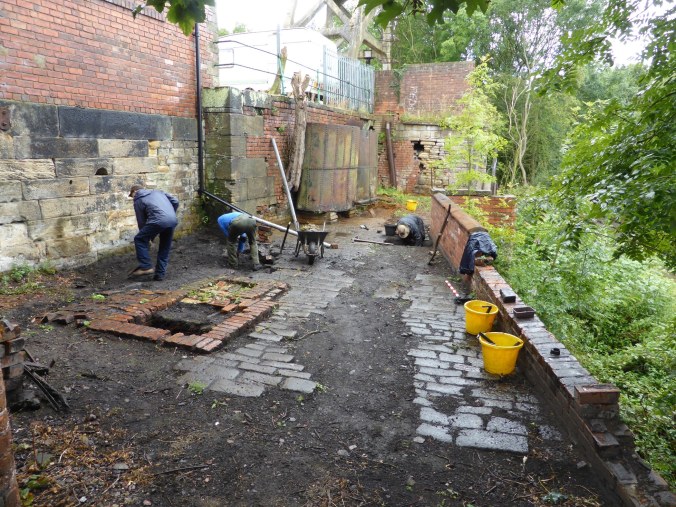 Nigel was digging close to the base of the old drain downfall pipe. After removing several inches of spoil, clinker and debris, he discovered that a ‘proper’ drain exists beneath, an earthenware drain, below the downcomer pipe from the rain gutter, however it is now blocked.

Peak mining expert and archaeologist John dug a hole section to look for evidence of a pipe trench which might explain the removal of the stone floor paving, however  no evidence to support this was found – confirming the absence of a feature here is as useful as discovering actual remains, it helps us understand what is happening on site and to put together a cohesive picture of the phases of development of the lower pit yard behind the winding engine house. 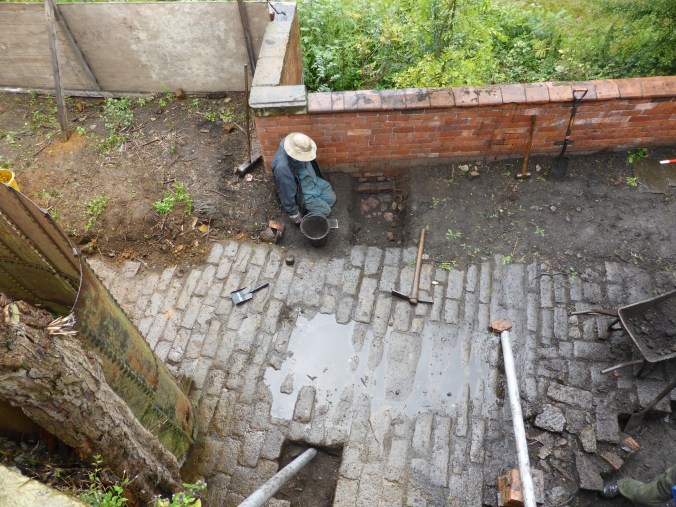 John and a trial pit section to see whether any pipes fill the void at the edge of the stone paving (Photo credit: John Hunter)

Meanwhile volunteers Phil and Chris commenced to peel away the surface layers at the very end of the stone pavement, trying to see how much further the cobbling continues. The stonework comes to an end after a few more feet. 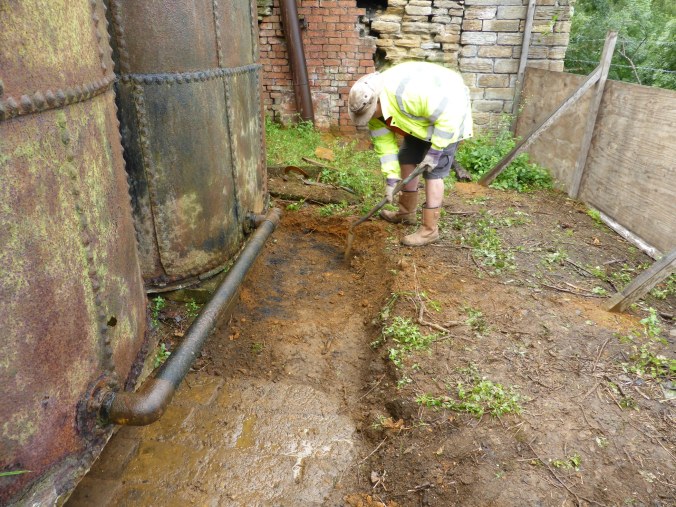 Volunteer Chris proving the end of the stone paving, and the nature of the surface by the two cisterns (Photo credit: John Hunter)

Next they both looked at the large water pipe running down the end facing wall, from the shaft top. Work digging in this area found plenty of coal waste and iron staining from water pumped from the nearby shaft. 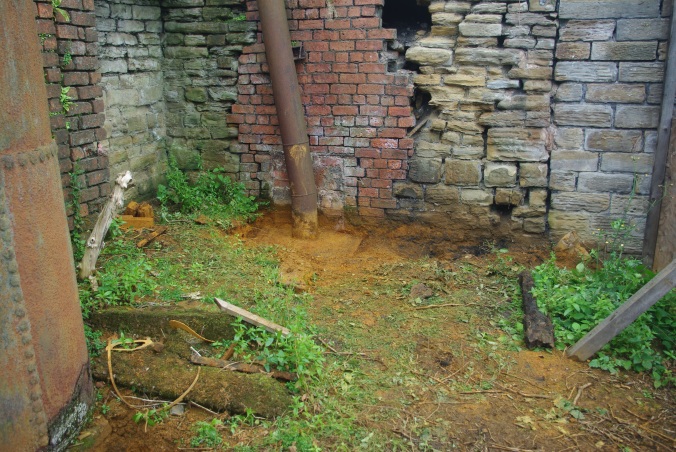 Pumping drainage pipe against the wall on the lower level (Photo credit: Nigel A. Chapman)

Excavating the top layers of orange-brown muck, they revealed a concrete structure at the base of the pumping overflow pipe. Clearly a twentieth century piece of welded pipework from the days when the pit was working as a pumping station under the NCB. 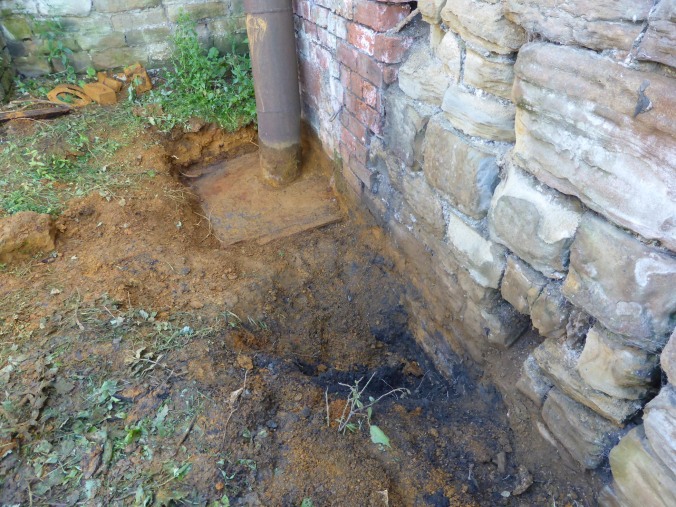 Concrete base around the pipe (Photo credit: John Hunter)

Water day for a day dream

Rain predictably stopped play on several occasions, with heavy showers sending water from the winding engine house roof straight onto the area of the dig. Despite persevering, as the hardy souls they are, the area was descending into something of a quagmire. Cue the ingenuity of volunteers: some impromptu guttering and a plastic pipe were used to move the water out over the cobbling and out of the path of the excavation. 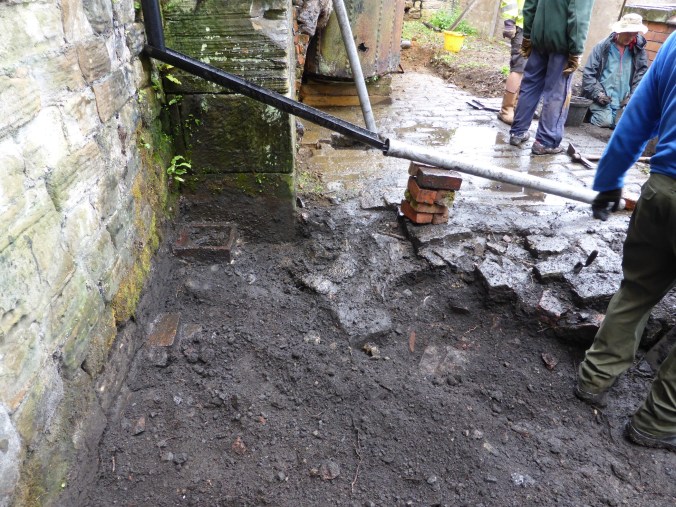 And so the excavation went on, tidying up the earthenware drain and surrounding area, and revealing an odd curving brickwork feature by the end of the stone paving. 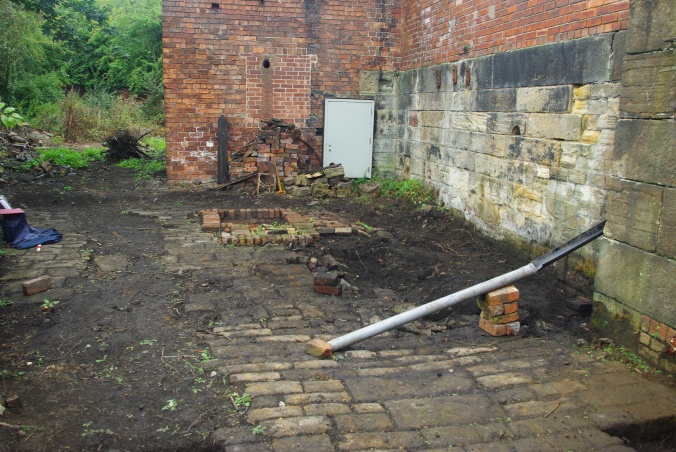 Eagle-eyed view of the excavations: 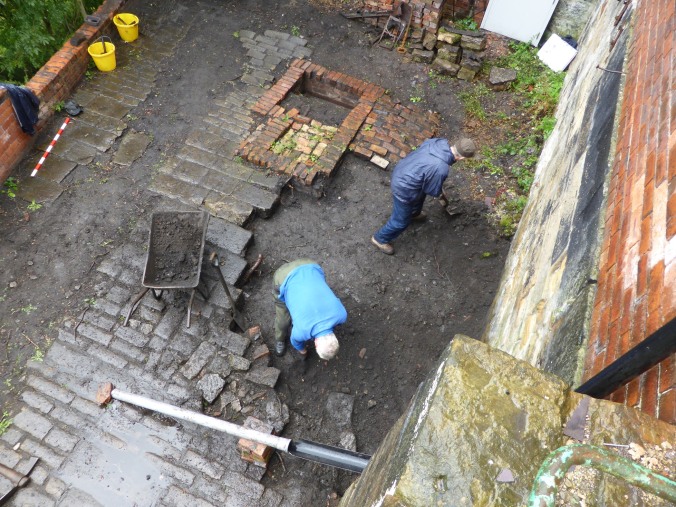 Volunteers Alan and Nigel uncovering the layers by the foot of the winding engine house (Photo credit: John Hunter) 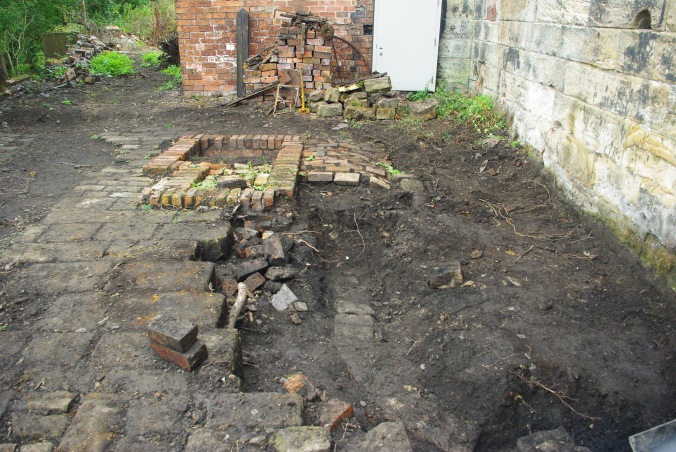 After a very good day’s work by the volunteers, it was time to review what loose finds had emerged from the lower terrace – finds consisted of a firebar from a steam boiler, the head of a miner’s pick, and a short length of flat wrought iron winding rope which has a distinctive weave. 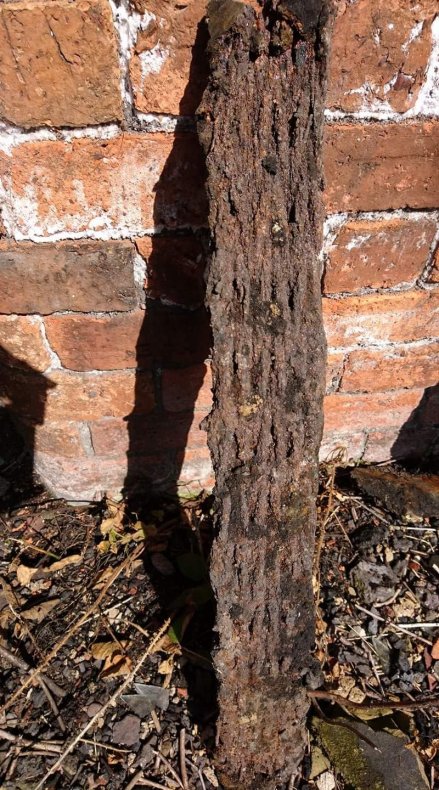 As the working day drew to a close, the sunshine returned, briefly, to lift some of the gloom, before it was time to down tools and call it a day. 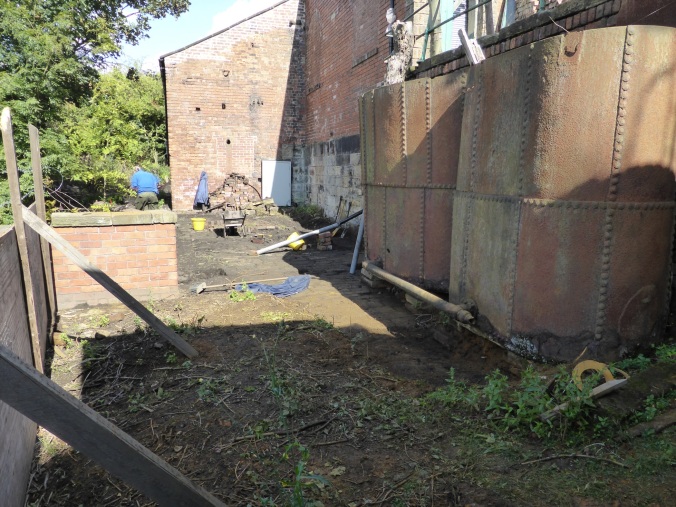 Meanwhile, at the top and front of the site, Glen and John worked on erecting three new steel fence panels by the entrance. Unfortunately, despite the very largely increased activity on site, Hemingfield does still suffer from the odd act of vandalism, and the old brick wall at the front has become steadily lower over the past two years. Whilst preparing to rebuild and renew, the Friends have decided to secure the site from the inside by extending some solid metal fencing by the front gate, to hopefully prevent unauthorised entry.

The first post holes and panel went in and were set, quickly securing the breach. 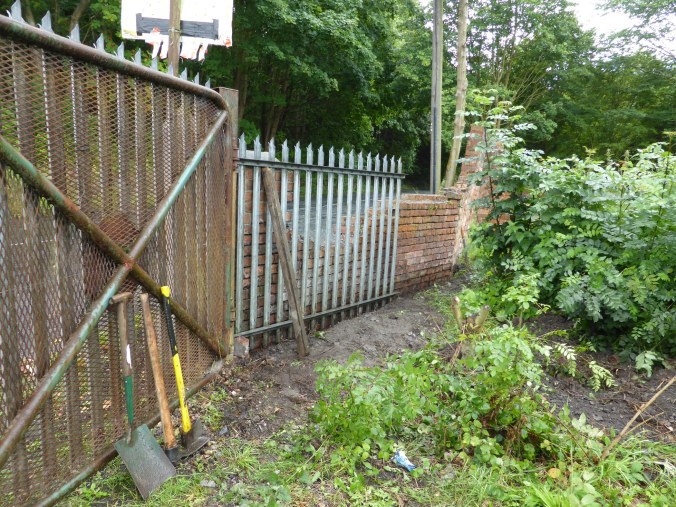 One down (or up, rather…) (Photo credit: John Hunter)

Followed by further post holes and additional security panels, which take the fence neatly up to the higher boundary wall. 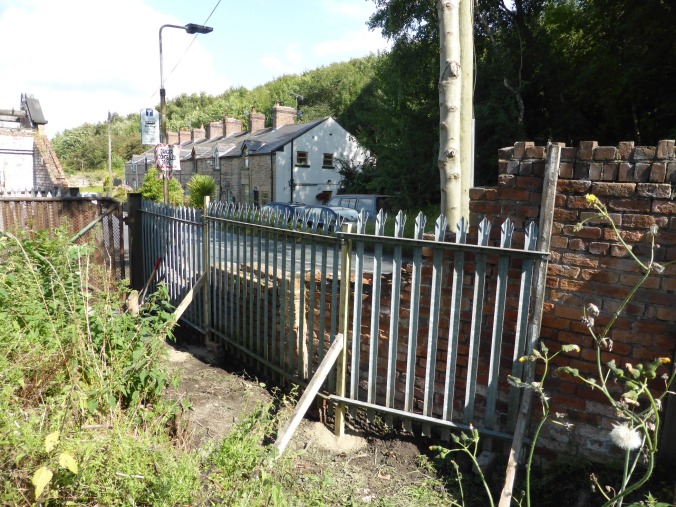 With the site secured, and new evidence of its past development newly explored, the group headed home from Hemingfield, looking forward to the next open days in September which marks the start of a busy month of local and heritage activities for the Friends.