Summertime gatherings stir the soul and lift the spirits. Surrounded by lush countryside, listening to breezy birdsong, and keeping cool in the shadow of this old workplace under a bright blue sky makes for a memorable day. 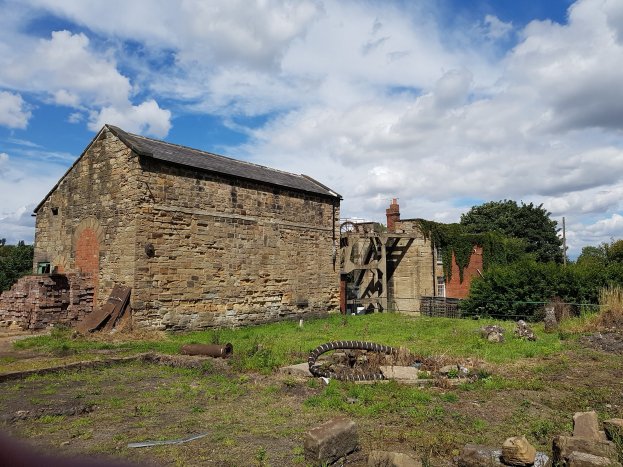 And so once more unto the pit, dear friends, once more, as the Friends of Hemingfield Colliery assembled to open the gates for another open day, and continue to maintain and explore the site.

Friends Director and Site Manager Glen opened up the site and welcomed regular volunteers John and Nigel, followed by Chris. With recent sun and the odd August shower, the grass (and weeds) demanded attention once more, so the Hemingfield strimmer patrol commenced early with Glen powering up the old reliable and making speedy headway though the greenery.

It’s a job that takes time, but is easier to get done if kept in hand: trimming short growth is simpler work than hacking back dense vegetation: we’re hopefully maintaining a somewhat quirky garden, not rediscovering a lost city!

And yet – rediscovering lost parts of the site is certainly something we continue to work at, too. The site is rich in possibilities for further industrial archaeology., both in its standing structures, and in the covered remains of previous colliery buildings, around the winding and pumping shafts. With this in mind regular volunteers Nigel and John, descended to the lower terrace to continue the dig revealing the stone paved area behind the winding engine house.

Stepping into the past

View of the rear of the winding engine house, with the stone paving straight ahead. Note the newly-refurbished guttering by the restored roofline.

Armed and ready with metre stick, trowel, tape measure, protractor, paper and pencils, Nigel continued to draw and record the current state of the excavation at the rear of the site.

Here a confusing array of brickwork disrupts the older stone paving blocks which run part of the length of the terrace.

This weekend, the focus was on removing the top spoil around the edge of the stone paving; ground which seemed to have been disturbed perhaps to make way for pipework underground.

Removing soil at the edge of the stone paving blocks

At the end of a long afternoon of digging by John and Nigel, the gap had yet to reveal new features, but the task of making sense of what the brick pit could be, and why the stones have been removed here continued. 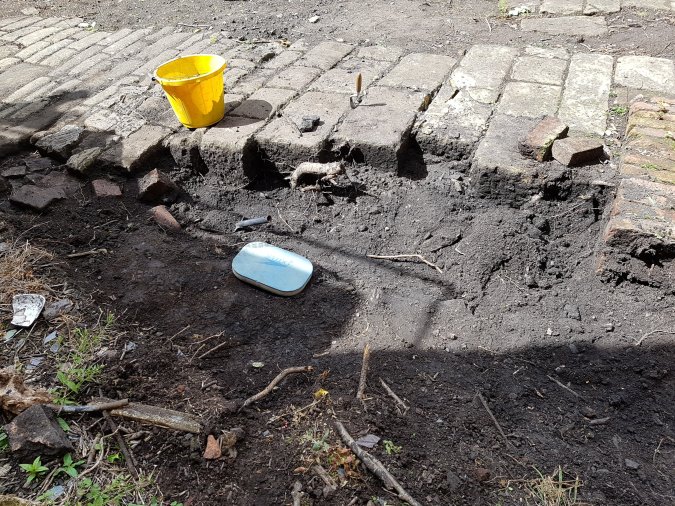 Meanwhile twixt the strimming and the archaeology, further site tidying continued, with volunteer Chris acting as an unorthodox vaquero, rounding up wayward bricks onsite with his trusty steed, or rather wheelbarrow in hand.

Gathering the piles of bricks, and sorting them into the unmarked older solid bricks, and the modern, named bricks which have a frog – not an amphibian guest, but rather an indentation to allow mortar to have a greater space to bond the brick. Coming from demolition rubble of the original boundary wall by Wath Road, the frog-less bricks outnumber the frogged many times over; however in later periods a whole host of local frogged bricks, from colliery sites and local brickyards appear, particularly Hoyland, Kilnhurst, and Manvers examples.

Much still to do – demolish rubble from the old boundary wall

Separating the frogged and unfrogged, sets up plenty of clean-up work, but leaves us plenty of reuseable bricks. The brick-chipping will go on!

Right-to-left: sorted, uncleaned bricks, frogged and unfrogged, on over to clean-up reusable piles

And now for something completely different.

The austere beauty of a former industrial site brings with it unusual sources of inspiration: a unique palette, unnatural shapes and curious objects. Local artist Iain Nicholls has paid close attention to these sources, and is producing a fascinating series of oil paintings; capturing the whole by exposing the parts of the site which are most curious, most colourful, or which reveal the oddest features, textures and shapes.

Below are given a few examples of this beautiful artwork, with the permission of the artist. 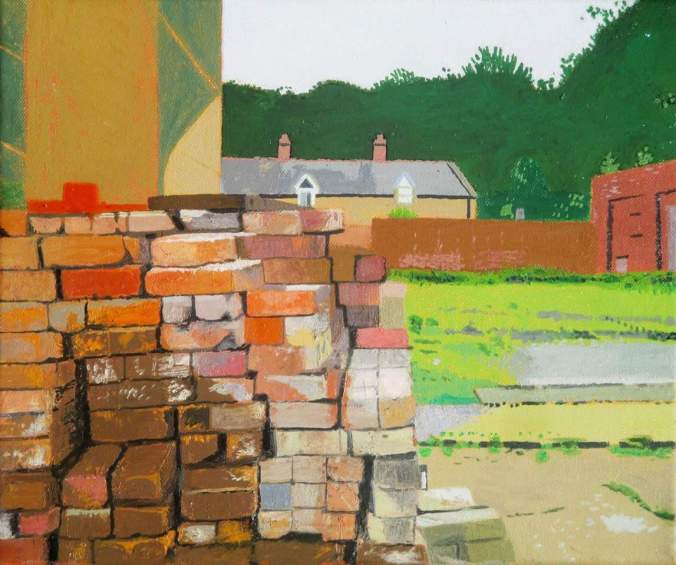