The Friends assembled for another working party weekend, bringing tools, talent and talk of recent research, together with a hint of excitement at the prospect of uncovering more features of the industrial archaeology of the site. Site Manager Glen, and Chair of the Friends Steve opened the gates to welcome volunteers Alan, John, Keith and Phil to the pit for what would be a fascinating day.

The area of investigation

Work began alongside the switchgear building. The last working party weekend had extended the area  being cleared away from the building. This time the focus was at the northern end, closest to the concrete headgear and winding engine house – a spot which helpfully included a number of recalcitrant tree stumps.

Looking back into the yard from the Wath Road boundary wall, showing the area of investigation.

Getting started under sunny skies, the volunteers encountered more roots clearing away the top layers of bracken, grass and weeds. Under this layer were a number of iron plates – their age and original purpose as yet unclear – but they certainly took some shifting during the morning!

Iron plates recovered from the surface

This new area also started to reveal lots of coal; little pieces perhaps, but a distinct concentration, and a feature of the ground at that end of the strip. The casual reader may well think: coal in a colliery, surely not!? but in fact these ‘black diamonds’ are rather more scarce than you would imagine.

Coal working on a commercial scale at Hemingfield ended over 95 years ago, in May 1920. At this point an abandonment plan was drawn up from the surveyed working plans and submitted to the Home Secretary – a practice which first became a legal obligation in 1873 under §42 of Coal Mines Regulation Act of 1872. The abandonment plans are now held by the Coal Authority at its headquarters in Mansfield, on behalf of the Health and Safety Executive whose Inspectorate of Mines, covering active workings, is still based in Sheffield. 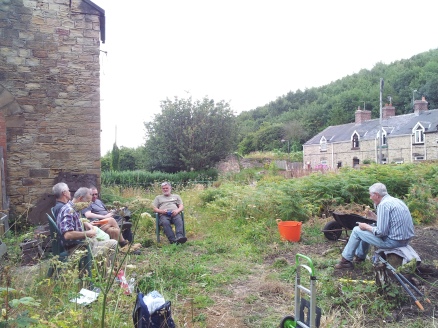 Luncheon is served and time for discussions

The Friends and volunteers paused for lunch and to catch up on mutual research interests. Lunchtime also saw the arrival of the ‘afternoon shift’ in the form of volunteer Chris who commented on the visible progress being made since his last visit to site. Over lunch he caught up with the morning’s work and listened to the recent work our education lead Phil, together with Glenda – one of our most active historical investigators – had made in tracing the families of former Hemingfield colliery workers, as well as the wonderful stories emerging from discussions with local Hemingfield residents. These insights make an invaluable contribution to understanding the site’s history, the local people and their working lives.

The Friends are always delighted to welcome local residents and supporters to the site, and this weekend was no exception as Glen introduced the site to new visitors – all of whom bring with them new insights and opportunities for the future conservation and development of the colliery site. The encouragement received from such visits is an extremely welcome feature of the efforts made by the Friends as they continue to raise awareness of the site, its history and the future plans to bring it back to life and a sustainable future.

Earlier in the morning, a small contingent had made a rewarding visit to one of Hemingfield pumping station’s older siblings – Elsecar pumping station – the brick-built substation by the side of the remarkable 1795 Newcomen type engine. Dr John Tanner, Museum and Heritage Project Manager at Barnsley Museums Service kindly showed the sub-station building which the South Yorkshire Mines Drainage Committee constructed, probably in 1944, replacing a much older building which stored electrical equipment powering the underground pumps that had first been installed in the early 1920s. Elsecar and Hemingfield were both part of the same pumping scheme, established in 1918 under the aegis of the South Yorkshire Mines Pumping Association. Hemingfield’s other surviving sibling is the Westfield pumping site – now craft workshop units in Rawmarsh. Future posts will no doubt cover the fascinating and colourful history of these 3 sites – each of them former collieries of the Earls Fitzwilliam, and possessing important remains of a now-vanished 19th Century industry.

The afternoon session saw the Friends and volunteers hard at it once more – digging, shoveling, sieving for small finds (and coal!) and pondering the apparently immovable tree stumps blocking progress. 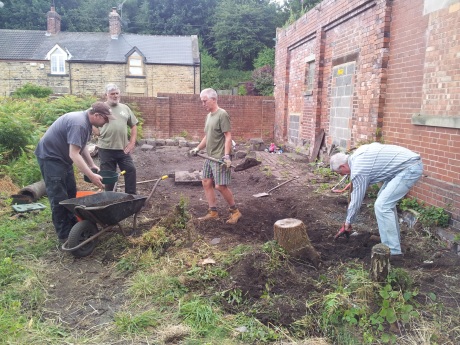 Cue: the practical engineers. The group is fortunate to count a number of very handy folk amongst its members: engineers, surveyors, geologists, those mechanically-minded and ready to provide solutions when problems arise. In this instance, the obstacle was a series of tree stumps; the solution, to bring out the winch.

It was impressive to see the 3 ton loaded winch and chains bite and slowly raise the stubborn stumps and enable the clearing and dig investigation to continue. All this toil and slog was definitely worthwhile, as the removal of the final stumps revealed a distinct edge of stonework. 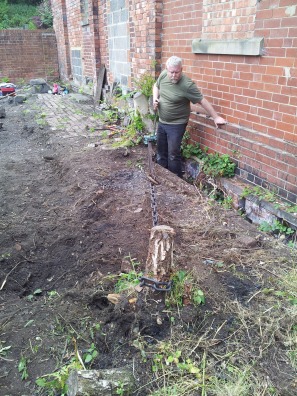 The heavy duty winch in action

With an air of excitement, the Friends and volunteers cleared away the surface layers and roots to reveal the archaeology and to help resolve what the sandstone feature might actually be.

With trowels and brushes to hand, the archaeological focus returned, tracing the line of stones, all marked with the familiar horizontal tooling marks seen throughout Elsecar and Earl Fitzwilliam’s buildings. Gently the top covering of grass and earth was removed. 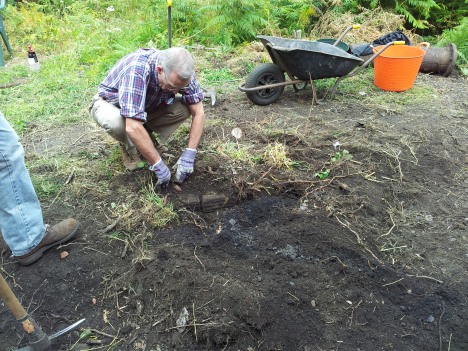 Revealing the edge of the sandstone alignment

Following the line of the stones, the diggers eventually found a return in the stone: a corner to the stonework.

Troweling along the sandstones to find the extent

At this juncture, as if by magic – (after professional engagements elsewhere) – volunteer and archaeologist Nigel appeared and guided efforts as the end of the working party was fast approaching.

More sweeping and clearing later, the diggers revealed a well-worn red brick floor. The stonework wall was quite thin, which suggests a single story building of some sort, the external wall was dressed, but had rubble stone fill in the walls.

Searching the site for cues and clues to what the newly-revealed corner could be, the flashing line in the winding engine house jumps out immediately. On the ground by the corner of the house is a line of sandstones, partly buried. This line appears to end at a point parallel with the corner return just revealed. It seems we have indeed uncovered the first indications of a lost building on site. 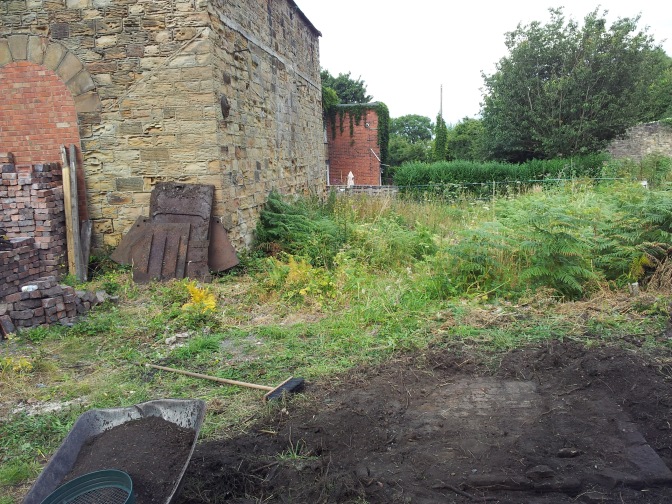 With the day coming to a pleasing conclusion, the friends and volunteers tidied the site and packed away tools and finds. Hopes were high that some work would be able to take place the following day, though the forecast was not promising.

On Sunday site manager Glen once again opened the colliery gates and volunteer Keith arrived to continue work. However the rain gods were against us, and a hasty retreat was sounded – back to old Ordnance Survey maps to try and understand the buildings on site – a great find on a very enjoyable weekend.