Summertime had certainly arrived in Hemingfield, with the village Gala taking place at the Ellis Church of England Primary School, over the canal, across the valley from the colliery at the top of Tingle Bridge Lane. Friends Director and Site Manager Glen opened the pit gates and put out the signing-in sheets ready for what would be a bright and busy, somewhat muggy, but memorable day.

Glen had been met by volunteer Nigel first thing. Volunteers Chris, Nigel and Amanda followed shortly thereafter, with Friends Chair Steve adding to the group. Volunteers Keith, Phil and Frank arrived later during the morning. Gloved and booted up, the Friends and volunteers took some tools and started to clear the surface and keep a look out for any interesting features and finds.

The effects of all the warm (and wet) weather of the past few weeks were certainly visible on site glancing around the pit yard. Bracken (Pteridium aquilinum), more usually seen on the moorland landscapes of our nearest National Park – the Peak District – could be seen ‘springing’ up again all around.

The pit yard with moorland greenery

Even the clearance work from our last few working weekends was subject to encroachment, with new fronds uncoiling amongst the bricks.

The next few weeks will be the time to decisively tackle the unwanted growth, but on Saturday some swift scythe work sufficed, as the focus was on continuing to clear the top layers of plant debris, loose material and rubble; to square off the area to the side of the switchgear building, and help to provide further insights to the sub-surface remains on site: our industrial archaeology.

Summer time and the digging is easy…

…when you have lots of Friends and volunteers – including a professional archaeologist – on site to lend a hand!

With a couple of spades and shovels, a mattock and pick, and a lot of elbow grease, the mounds of roots, rubbish and brick rubble slowly gave way to a hard-packed surface towards the winding house end of the cleared area, and more of the intriguing alignment of sandstone blocks parallel to the Wath Road Boundary wall.

Squaring off the dig area.

It was slow but steady work in the growing heat of the day. With volunteers on hand, the Friends took turns at continuing the digging and carting the spoil and rubble away, taking care to separate out roots (stacked for burning).

Eschewing crisp packets and car parts, as the topmost rubbish was removed, the volunteers decided to use a sieve on some of the spoil nearest the sandstone blocks, checking to see if there was anything interesting amongst the small stones, brick-bits, and roots. This also served a secondary purpose of separating the soil we were dumping elsewhere on site from the small rubble which makes excellent graded hardcore for the entrance to the yard. Of course, any sizable stones and complete bricks were reclaimed and carefully laid aside for future use.

Pausing for a variety of well-earned lunches, including local delicacies such as a pork pie with black pudding – from Billy’s Hill farm shop in Hemingfield, and Viennese whirls lovingly baked in Carlton, Barnsley (for Mr Kipling).

Elsewhere on site, volunteer Keith had delivered some wood to the site first thing on Saturday. He returned later in the morning with tools to build a temporary cover for the overwind controller inside the stone winding engine house. 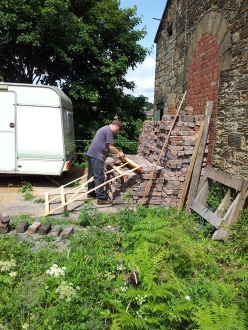 The overwind controller – identified as a circular type Mellings controller made at Worsley Mesnes Ironworks Ltd of Wigan – has suffered from being directly under a decayed section of roofing. Having a sturdy cover in place will help to protect it from the elements for the near future and ensure we can plan for future conservation and restoration activities.

In the winding house, installing the cover. 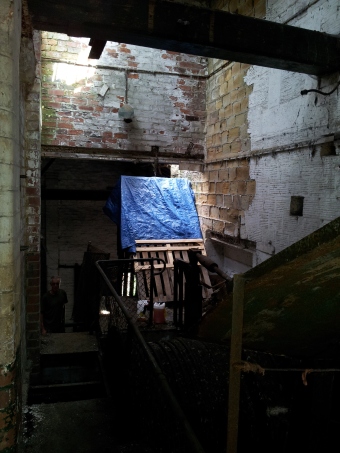 Tool of the Trade

Nigel and Amanda’s careful digging bore fruit in the shape of a Spanner with a podger – what’s that, you say?

One of these – a wrought iron tool used to align bolt-holes and tighten nuts. Familiar to modern day steel erectors, this tool is certainly a little older in date and makes a solid and sturdy implement for heavy work.

Digging, shoveling, sieving and carting continued well into the afternoon. Judicious application of sun lotion and strategic deployment of hats were certainly the orders of the day as Friends Director Christine arrived hot-foot from work to raise spirits and catch up on the volunteers’ progress on site.

Nigel tidying up the volunteers’ work and exploring the masonry.

The beginning of the day 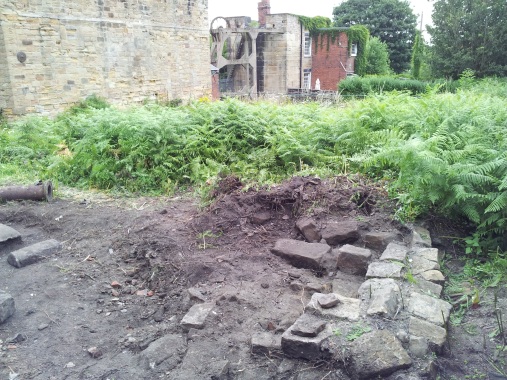 The end of the day

There’s always something new to uncover at Hemingfield; whether from digging and archaeological investigation, or just getting to grips with the weird and wonderful details of the buildings on site. Two examples kept the Friends and volunteers entertained this weekend:

In the archaeological dig area, we had previously uncovered an odd section of pre-cast concrete. With willing volunteers to hand, we decided to try and lift it just to see if there was anything of interest beneath: 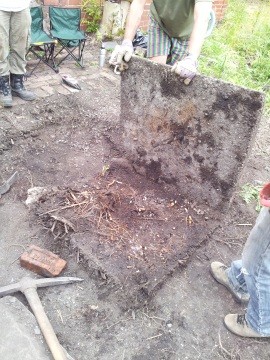 Cue: a rush of little black dots – an ant’s nest! Before quickly returning it to its former position, the concrete section can be seen to have iron pins in it – a cover of some kind? There don’t appear to be any other examples of this type on site, so its function is still unclear, a remnant of maintenance work?

Slightly more mundanely, Friends Chair Steve also asked if the volunteers could lend a hand to sneak a peak under a metal cover. Many hands duly obliged: 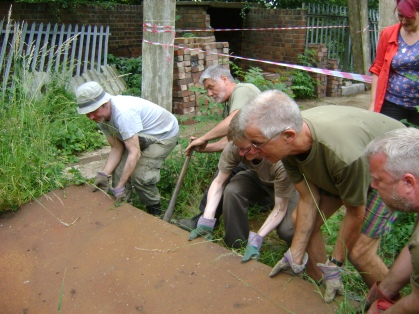 Revealing a modern block-work store, used as a dump for rubble and old building materials in the final years of the pumping station’s life. 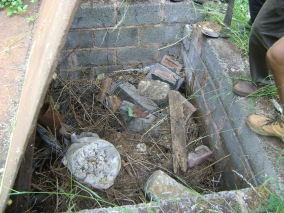 Gently returning the lid, and pausing for breath in the heat of the day, a wag suggested that the colliery might benefit from a feature bathing pool!

With the working day drawing to a close and teatime fast approaching, the Friends Directors produced a surprise for the remaining volunteers – a barbecue!

Of course a modern English summer is nothing without a barbecue, and a barbecue is nothing without a refreshing downpour to herald its arrival, and so it proved to be. Necessity being the mother of all manner of inventions, the group repaired to the shelter of the headgear, and sat down to enjoy a delightful meal and an evening of discussion, good humour and plans for the coming year; all set atop the covered shaft of a 153 yard winding shaft, and under the protection of the 1939-40 concrete headgear – a truly unique location and a delightful way to round off another busy day.

Pit top BBQ under the headgear

On Sunday, Friends Directors Glen and Steve, and volunteers Phil and Keith had a useful day working at clearing the next section of the strip around the switchgear building, working back towards the headgear. Under the roots and rubble they encountered two iron plates which have been safely stored away. The weather was good and the site was tidied up and the gates secured before the colliery called time on another working party weekend.